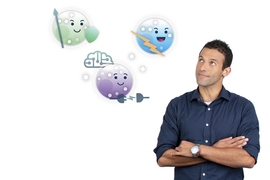 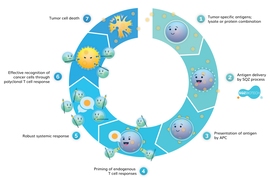 Cell-based immunotherapies, which often involve engineering cells to activate or suppress the immune system, have delivered some dramatic results to cancer patients with few other options. But the complex process of developing these therapies has limited a field that many believe could be a powerful new frontier in medicine.

Using a proprietary platform and an unconventional approach, startup SQZ Biotech is trying to expand immunotherapy’s impact by simplifying the process of engineering immune cells, thus unlocking a slew of new applications for the technology.

SQZ co-founder and CEO Armon Sharei SM ’13 PhD ’13 says his company leverages a simple process — squeezing cells so they can be penetrated by specific molecules — to engineer a broader suite of cell functions than has been possible with the gene therapy approaches that have attracted the bulk of the investments in the field.

In the middle of next year, backed by over $100 million in funding and a collaboration with Roche that could net SQZ over $1 billion in drug development milestone payments, the startup is aiming to begin clinical trials on a treatment targeting human papillomavirus (HPV)-positive tumors. The company’s next potential therapy is aimed at autoimmune diseases including Type 1 diabetes.

Clinical trials will be the true test for a technology that Sharei believes can have a life-altering impact across a variety disease types.

“There’s many things SQZ can do,” Sharei says. “We think [these two clinical programs] are just the beginning.”

CAR T-cell therapies were approved by the U.S. Food and Drug Administration in 2017. They work by extracting a patient’s T cells, known as the soldiers of the immune system, and genetically engineering them to attack cancer cells. The engineered T cells are then injected back into the patient. The process has demonstrated the remarkable potential of immunotherapy, but it is still being refined, has certain limitations, and can be prohibitively expensive.

SQZ’s lead programs avoid genetic engineering to modulate long-term immune responses. The company’s current focus in oncology is on a broad class of cells known as antigen presenting cells, or APCs, which Sharei describes as the “generals of the immune system.” APCs can instruct a patient’s T cells to attack cancerous cells by presenting the right antigens on their surface in a function of the immune system that occurs naturally.

Engineering APCs to drive specific immune responses has been a struggle for researchers to date, but SQZ has shown that their platform offers a simple, scalable way to tackle the issue. The platform works by squeezing a patient’s immune cells through narrow channels on a microfluidic chip, making the cell membranes temporarily open up. Tumor-associated antigens are inserted into the cells and then naturally present on the cell’s surface, creating an APC. The engineered APCs can then be given back to the patient, where they can instruct the patient’s T cells as they naturally would, offering a relatively simple way to train T cells to attack cancer cells.

Conversely, when SQZ’s technology is used to target autoimmune diseases, red blood cells can be squeezed and manipulated to suppress an immune response, which Sharei says could lead to an innovative approach to treating chronic auto-immune diseases such as Type 1 diabetes.

The technology behind SQZ was discovered out of exasperation as much as innovation. It began as a research project in the lab of Klavs Jensen, the Warren K. Lewis Professor of Chemical Engineering and a professor of materials science and engineering at MIT.

For over three years, researchers on the project attempted to shoot materials into cells using a microfluidic device and a jet. The cells proved to be difficult to penetrate, often deflecting away from the jet’s stream, so the team started forcing the cells toward the jet by constricting the cells through smaller channels within the chip. Eventually the project started to yield limited, often uncontrollable, results.

“It was a rough project,” remembers Sharei, who joined the project as a PhD candidate when it was roughly two years old, while being co-advised by Jensen and Robert Langer, the David H. Koch Institute Professor. “There was quite a while when nothing was happening. We kept banging our head against the wall with the jet technique.”

One day the team decided to run the cells through the system without the jet and found that biomaterials in the fluid still entered the cells. That’s when they realized that constricting, or squeezing, the cell was opening up holes in the cell membranes.

The discovery set off a string of experiments to improve the process. In 2013, Sharei, Jensen, and Langer founded SQZ Biotech to share the cell squeezing technology with other research groups. But those collaborations didn’t produce the kind of groundbreaking experiments Sharei and his team were hoping for.

“Companies and academics weren’t really using SQZ for the new things it could do,” Sharei says. “They were using it for the things they could already do, just to do them better. That wasn’t going to have the game changing impact we envisioned for it.”

So SQZ pivoted from providing a lab tool to developing new therapies. Sharei, whose undergraduate work in organic electronics had made him an unlikely participant in the original research project to begin with, found himself with his first full-time job running a company with a unique strategy.

“At the time, the cell therapy industry was very focused on CAR T-cell therapy and gene editing,” Sharei says. “We thought there were much more powerful and simple concepts to implement [with SQZ], and you could hit a lot more diseases. This was an initially difficult message to convey to the field.”

But the broader perception of SQZ changed overnight when the startup signed a partnership with Roche toward the end of 2015, which marked Roche’s first investment in cell-based immunotherapies. Recently, after nearly three years of encouraging preclinical research, Roche announced a dramatic expansion of that partnership, to include more types of APCs in the upcoming clinical trials. The deal gives SQZ $125 million in upfront payments and near-term milestones. On top of that, SQZ may receive development milestone payments of over $1 billion from the pharmaceutical giant. The collaboration also stipulates the two companies could share certain commercial rights to approved products in the future.

The deal gives SQZ some spending power as it tries to strike a balance among pursuing research initiatives internally, partnering with other companies, and granting licenses to outside research groups.

For Sharei, the researcher-turned-CEO, the goal is finding the right path to turn SQZ’s potential into treatments that maximize impact for patients.

STAT reporter Kate Sheridan writes about MIT startup SQZ Biotech, which is developing a “technology that will squeeze cells to open up tiny pores in their membranes to deliver gene therapies or medicines straight into the cell.”