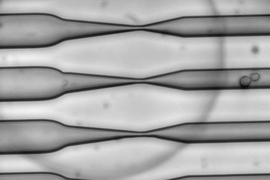 ↓ Download Image
Caption: As cells squeeze through a narrow channel, tiny holes open in their membranes, allowing large molecules such as RNA to pass through.
Credits: Image: Armon Sharei and Emily Jackson

Caption:
As cells squeeze through a narrow channel, tiny holes open in their membranes, allowing large molecules such as RNA to pass through.
Credits:
Image: Armon Sharei and Emily Jackson

Caption:
As cells squeeze through a narrow channel, tiny holes open in their membranes, allowing large molecules such as RNA to pass through.
Credits:
Image: Armon Sharei and Emily Jackson
Living cells are surrounded by a membrane that tightly regulates what gets in and out of the cell. This barrier is necessary for cells to control their internal environment, but it makes it more difficult for scientists to deliver large molecules such as nanoparticles for imaging, or proteins that can reprogram them into pluripotent stem cells.

Using this technique, the researchers were able to deliver reprogramming proteins and generate induced pluripotent stem cells with a success rate 10 to 100 times better than any existing method. They also used it to deliver nanoparticles, including carbon nanotubes and quantum dots, which can be used to image cells and monitor what’s happening inside them.

“It’s very useful to be able to get large molecules into cells. We thought it might be interesting if you could have a relatively simple system that could deliver many different compounds,” says Klavs Jensen, the Warren K. Lewis Professor of Chemical Engineering, professor of materials science and engineering, and a senior author of a paper describing the new device in this week’s issue of the Proceedings of the National Academy of Sciences.

Biologists have previously developed several ways to get large molecules into cells, but all of them have drawbacks. DNA or RNA can be packaged into viruses, which are adept at entering cells, but that approach carries the risk that some of the viral DNA will get integrated into the host cell. This method is commonly used in lab experiments but has not been approved by the FDA for use in human patients.

Another way to sneak large molecules into a cell is to tag them with a short protein that can penetrate the cell membrane and drag the larger cargo along with it. Alternatively, DNA or proteins can be packaged into synthetic nanoparticles that can enter cells. However, these systems often need to be re-engineered depending on the type of cell and material being delivered. Also, with some nanoparticles much of the material ends up trapped in protective sacs called endosomes inside the cell, and there can be potential toxic side effects.

Electroporation, which involves giving cells a jolt of electricity that opens up the cell membrane, is a more general approach but can be damaging to both cells and the material being delivered.

The new MIT system appears to work for many cell types — so far, the researchers have successfully tested it with more than a dozen types, including both human and mouse cells. It also works in cells taken directly from human patients, which are usually much more difficult to manipulate than human cell lines grown specifically for lab research.

“This appears to be a very broadly applicable approach for loading a diversity of different compounds into a diversity of different cells,” says Mark Prausnitz, a professor of chemical and biomolecular engineering at Georgia Tech, who was not part of the research team. “It’s a really nice example of taking devices from the world of engineering and microelectronics and using them in quite different ways to solve problems in medicine that could have really great impact.”

The new device builds on previous work by Jensen and Langer’s labs, in which they used microinjection to force large molecules into cells as they flowed through a microfluidic device. This wasn’t as fast as the researchers would have liked, but during these studies, they discovered that when a cell is squeezed through a narrow tube, small holes open in the cell membrane, allowing nearby molecules to diffuse into the cell.

To take advantage of that, the researchers built rectangular microfluidic chips, about the size of a quarter, with 40 to 70 parallel channels. Cells are suspended in a solution with the material to be delivered and flowed through the channel at high speed — about one meter per second. Halfway through the channel, the cells pass through a constriction about 30 to 80 percent smaller than the cells’ diameter. The cells don’t suffer any irreparable damage, and they maintain their normal functions after the treatment.

The research team is now further pursuing stem cell manipulation, which holds promise for treating a wide range of diseases. They have already shown that they can transform human fibroblast cells into pluripotent stem cells, and now plan to start working on delivering the proteins needed to differentiate stem cells into specialized tissues.

Another promising application is delivering quantum dots — nanoparticles made of semiconducting metals that fluoresce. These dots hold promise for labeling individual proteins or other molecules inside cells, but scientists have had trouble getting them through the cell membrane without getting trapped in endosomes.

In a paper published in November, working with MIT graduate student Jungmin Lee and chemistry professor Moungi Bawendi, the researchers showed that they could get quantum dots inside human cells grown in the lab, without the particles becoming confined in endosomes or clumping together. They are now working on getting the dots to tag specific proteins inside the cells.

The researchers are also exploring the possibility of using the new system for vaccination. In theory, scientists could remove immune cells from a patient, run them through the microfluidic device and expose them to a viral protein, and then put them back in the patient. Once inside, the cells could provoke an immune response that would confer immunity against the target viral protein.

In a piece for Scientific American, Ryan Bradley examines how MIT researchers have developed a new method to control cells by squeezing them. The work, which is being commercialized as a company called SQZ Biotech, was named one of 10 World Changing ideas by Scientific American.