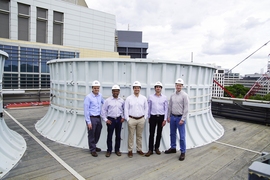 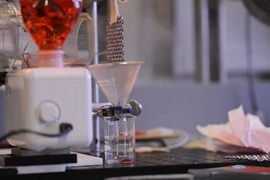 ↓ Download Image
Caption: The team’s lab setup was used to test the powerplant condenser system. The mesh is placed above the funnel at right to collect the water that condenses on the mesh.
Credits: Courtesy of researchers 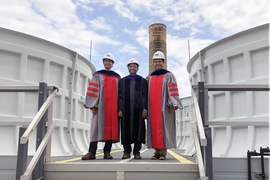 Caption:
The team’s lab setup was used to test the powerplant condenser system. The mesh is placed above the funnel at right to collect the water that condenses on the mesh.
Credits:
Courtesy of researchers

A new system devised by MIT engineers could provide a low-cost source of drinking water for parched cities around the world while also cutting power plant operating costs.

About 39 percent of all the fresh water withdrawn from rivers, lakes, and reservoirs in the U.S. is earmarked for the cooling needs of electric power plants that use fossil fuels or nuclear power, and much of that water ends up floating away in clouds of vapor. But the new MIT system could potentially save a substantial fraction of that lost water — and could even become a significant source of clean, safe drinking water for coastal cities where seawater is used to cool local power plants.

The principle behind the new concept is deceptively simple: When air that’s rich in fog is zapped with a beam of electrically charged particles, known as ions, water droplets become electrically charged and thus can be drawn toward a mesh of wires, similar to a window screen, placed in their path. The droplets then collect on that mesh, drain down into a collecting pan, and can be reused in the power plant or sent to a city’s water supply system.

The system, which is the basis for a startup company called Infinite Cooling that last month won MIT’s $100K Entrepreneurship Competition, is described in a paper published today in the journal Science Advances, co-authored by Maher Damak PhD ’18 and associate professor of mechanical engineering Kripa Varanasi. Damak and Varanasi are among the co-founders of the startup, and their research is supported in part by the Tata Center for Technology and Design.

Varanasi’s vision was to develop highly efficient water recovery systems by capturing water droplets from both natural fog and plumes of industrial cooling towers. The project began as part of Damak’s doctoral thesis, which aimed to improve the efficiency of fog-harvesting systems that are used in many water-scarce coastal regions as a source of potable water. Those systems, which generally consist of some kind of plastic or metal mesh hung vertically in the path of fogbanks that regularly roll in from the sea, are extremely inefficient, capturing only about 1 to 3 percent of the water droplets that pass through them. Varanasi and Damak wondered if there was a way to make the mesh catch more of the droplets — and found a very simple and effective way of doing so.

The reason for the inefficiency of existing systems became apparent in the team’s detailed lab experiments: The problem is in the aerodynamics of the system. As a stream of air passes an obstacle, such as the wires in these mesh fog-catching screens, the airflow naturally deviates around the obstacle, much as air flowing around an airplane wing separates into streams that pass above and below the wing structure. These deviating airstreams carry droplets that were heading toward the wire off to the side, unless they were headed bang-on toward the wire’s center.

The result is that the fraction of droplets captured is far lower than the fraction of the collection area occupied by the wires, because droplets are being swept aside from wires that lie in front of them. Just making the wires bigger or the spaces in the mesh smaller tends to be counterproductive because it hampers the overall airflow, resulting in a net decrease in collection.

But when the incoming fog gets zapped first with an ion beam, the opposite effect happens. Not only do all of the droplets that are in the path of the wires land on them, even droplets that were aiming for the holes in the mesh get pulled toward the wires. This system can thus capture a much larger fraction of the droplets passing through. As such, it could dramatically improve the efficiency of fog-catching systems, and at a surprisingly low cost. The equipment is simple, and the amount of power required is minimal.

Next, the team focused on capturing water from the plumes of power plant cooling towers. There, the stream of water vapor is much more concentrated than any naturally occurring fog, and that makes the system even more efficient. And since capturing evaporated water is in itself a distillation process, the water captured is pure, even if the cooling water is salty or contaminated. At this point, Karim Khalil, another graduate student from Varanasi’s lab joined the team.

“It’s distilled water, which is of higher quality, that’s now just wasted,” says Varanasi. “That’s what we’re trying to capture.” The water could be piped to a city’s drinking water system, or used in processes that require pure water, such as in a power plant’s boilers, as opposed to being used in its cooling system where water quality doesn’t matter much.

A typical 600-megawatt power plant, Varanasi says, could capture 150 million gallons of water a year, representing a value of millions of dollars. This represents about 20 to 30 percent of the water lost from cooling towers. With further refinements, the system may be able to capture even more of the output, he says.

What’s more, since power plants are already in place along many arid coastlines, and many of them are cooled with seawater, this provides a very simple way to provide water desalination services at a tiny fraction of the cost of building a standalone desalination plant. Damak and Varanasi estimate that the installation cost of such a conversion would be about one-third that of a building a new desalination plant, and its operating costs would be about 1/50. The payback time for installing such a system would be about two years, Varanasi says, and it would have essentially no environmental footprint, adding nothing to that of the original plant.

“This can be a great solution to address the global water crisis,” Varanasi says. “It could offset the need for about 70 percent of new desalination plant installations in the next decade.”

In a series of dramatic proof-of-concept experiments, Damak, Khalil, and Varanasi demonstrated the concept by building a small lab version of a stack emitting a plume of water droplets, similar to those seen on actual power plant cooling towers, and placed their ion beam and mesh screen on it. In video of the experiment, a thick plume of fog droplets is seen rising from the device — and almost instantly disappears as soon as the system is switched on.

The team is currently building a full-scale test version of their system to be placed on the cooling tower of MIT’s Central Utility Plant, a natural-gas cogeneration power plant that provides most of the campus’ electricity, heating, and cooling. The setup is expected to be in place by the end of the summer and will undergo testing in the fall. The tests will include trying different variations of the mesh and its supporting structure, Damak says.

That should provide the needed evidence to enable power plant operators, who tend to be conservative in their technology choices, to adopt the system. Because power plants have decades-long operating lifetimes, their operators tend to “be very risk-averse” and want to know “has this been done somewhere else?” Varanasi says. The campus power plant tests will not only “de-risk” the technology, but will also help the MIT campus improve its water footprint, he says. “This can have a high impact on water use on campus.”

John Yang reports for PBS NewsHour about technologies to harvest fog to secure the world’s water supply, including one system designed by Prof. Kripa Varanasi to collect water from power plant cooling towers. Varanasi and his team “discovered that zapping air rich in fog with a beam of electrically charged particles draws the droplets toward the mesh, dramatically increasing its ability to collect water,” says Yang.

In this video, VOA reporter Steve Baragona looks at different methods of harvesting water from fog. Baragona highlights a new system developed by MIT researchers, explaining that in some areas where the water supply is dwindling, “the technology is far cheaper than other options like desalination.”

Full story via Voice of America →

MIT graduates Maher Damak and Karim Khalil discuss their startup Infinite Cooling and the new technique they developed to capture and recycle water expelled from power plant cooling towers on Bloomberg Baystate Business. Co-host Tom Moroney calls this energy efficient method that captures up to 80 percent of the water, an “idea that could change the world.”

Xinhua reports that MIT engineers have developed a new method of harvesting water from industrial cooling towers that could decrease the operating cost of power plants. Eventually the new method could also be used to harvest, “safe drinking water for coastal cities where seawater is used to cool local power plants.”

Writing for IEEE Spectrum, David Wagman spotlights a new technology from MIT researchers that could offer water-scarce cities, “a new source of the precious resource” by capturing and reusing water from cooling towers. Prof. Kripa Varanasi notes that their system, “can achieve on the order of 99 percent efficiency,” in capturing the water droplets.

In an article for The Verge, Angela Chen highlights a new technique developed by MIT researchers to harvest water from fog. In the future, the researchers hope to place the harvesters, “near cooling plumes to collect and reuse water that would otherwise be lost.”

MIT researchers have developed a system that captures water from power plant cooling towers, writes Martin Finucane for The Boston Globe. Finucane explains that, “the captured water would be pure, distilled water and could be piped to a city’s water system or it could be used in the power plant’s boilers, which, unlike the cooling system, require clean water.”

MIT researchers developed an electrically charged fog collector that can attract and collect more water droplets than a regular fog harvester, writes Matt Simon for Wired. The technology could eventually be used to recover water from power plant cooling towers where it can, “capture the plumes and collect that water,” explains Prof. Kripa Varanasi.

Fast Company reporter Adele Peters writes that MIT researchers have developed a system that captures large amounts of water from the cooling towers used on power plants and data centers. Prof. Kripa Varanasi explains that he hopes this new technology can be used to address water scarcity: “We are thinking of each of these cooling towers as water farms.”