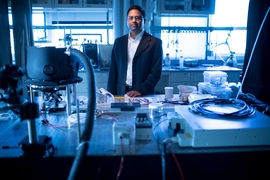 ↓ Download Image
Caption: “If you really understand the phenomena, you can reduce it to a few nondimensional parameters,” MIT mechanical engineer Kripa Varanasi says. That collapses the complexity into manageable formulas and phase diagrams, “and then we can design new processes, new products, and zero-tradeoff solutions.” That approach, he says, has been “at the heart of the companies we’ve started.” 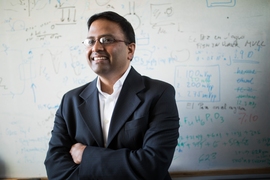 ↓ Download Image
Caption: “If you really understand the phenomena, you can reduce it to a few nondimensional parameters,” MIT mechanical engineer Kripa Varanasi says. That collapses the complexity into manageable formulas and phase diagrams, “and then we can design new processes, new products, and zero-tradeoff solutions.” That approach, he says, has been “at the heart of the companies we’ve started.”

Caption:
“If you really understand the phenomena, you can reduce it to a few nondimensional parameters,” MIT mechanical engineer Kripa Varanasi says. That collapses the complexity into manageable formulas and phase diagrams, “and then we can design new processes, new products, and zero-tradeoff solutions.” That approach, he says, has been “at the heart of the companies we’ve started.”
Credits:
Photo: Bryce Vickmark

Ketchup’s sluggish pace as it oozes out of its bottle is a longstanding nuisance — but one that is about to be upended by a new product coming to market. The brainchild of MIT mechanical engineer Kripa Varanasi and his students, a new coating called LiquiGlide is set to make the transition from the laboratory to consumer and industrial markets.

LiquiGlide renders a surface highly slippery and allows every last drop of ketchup — or almost any other viscous product, from paint, to glue, to cosmetics — to flow from its container without sticking, saving billions of gallons of product from going waste.

“Viscous products sticking to the inside of containers leads to huge losses across industries,” Varanasi says. “For example, in paint manufacturing alone, paint sticking to the inside of mixing and holding tanks costs the industry more than 100 million gallons of lost product and billions of dollars per year in associated waste costs. Using the LiquiGlide platform, we are on a mission to eliminate waste generated across manufacturing applications, in areas ranging from food and agrochemical production to health care and energy, to usher in a new era of sustainable manufacturing.”

LiquiGlide, which emerged from research initially funded by an MIT Energy Initiative seed grant and an Innovation grant from the Deshpande Center, is just one in a long line of startling discoveries to emerge from Varanasi’s lab. Most of them involve ways of modifying interfaces. “Interfaces are ubiquitous and a lot of important phenomena occur at them, be it mass, momentum, energy, or charge transfer,” he says. “When I came to MIT in 2009 as a faculty member, my vision was to fundamentally alter interfaces to dramatically improve performance across various industries including energy, water, agriculture, manufacturing, food, and medicine. This required both a deep scientific endeavor to change the paradigm and simultaneous effort in scale-up and manufacturing to translate the technologies to market.”

The findings by Varanasi and his collaborators could not only help consumers get those last drops of ketchup, honey, or skin cream out of their jars, they may also enhance many other processes relating to manufacturing and power plants, airplane de-icing, flow in pipelines, water treatment and desalination, and reducing agricultural runoff, to name just a few of the team’s recent research results.

For Varanasi, the first step in tackling these big problems was getting a better understanding of exactly how the processes worked. “First you have to understand the problem and ask the right questions. A mechanistic understanding is crucial. If you don’t understand the crucial bottlenecks and rate-limiting steps, then you’re looking for a needle in a haystack. Most of the times, significantly larger-than-required effort is expended in running processes. My approach is to develop a rigorous thermodynamic framework that helps identify the true bottlenecks and then figure out efficient kinetic pathways to impart the solution. The exciting part of this is we get the opportunity to learn about multiple disciplines and cross-pollinate our learnings.”

Part of that understanding involved finding ways to simplify the mathematical descriptions of what was going on. “If you really understand the phenomena, you can reduce it to a few nondimensional parameters,” Varanasi says. That collapses the complexity into manageable formulas and phase diagrams, “and then we can design new processes, new products, and zero-tradeoff solutions.” That approach, he says, has been “at the heart of the companies we’ve started.”

Varanasi’s choice of a career in science and academia was inspired by a long family history. He grew up in Hyderabad, in southern India, where his father works as an electrical engineer and his mother is a physics lecturer. His grandfathers were teachers. “There was a lot of that in the family — my parents were my first teachers and role models,” he says.

He credits his mother Kanthi especially for initiating his ambitions in both science and entrepreneurship, and his father Mohan Rao with helping him to understand mathematics and build science projects. While in school, he was active in science fairs, physics and math competitions, and building various projects starting with a kit of electronic circuits. “My mom got me this amazing kit, and my dad would help me understand how to build stuff with it,” he recalls.

After high school in his home city, he went on to earn his undergraduate degree from the Indian Institute of Technology in nearby Madras before coming to MIT as a graduate student to earn his masters and doctoral degrees. “IIT Madras taught me the fundamentals in engineering and gave me the confidence to pursue my dreams,” he says.

“Coming to MIT was transformational,” he says. Among other things, he says, he learned the importance of “asking the right questions — not just ‘why,’ but then ‘why not?’” It also taught him about “the entrepreneurial spirit and how to apply it to solving real problems.”

He then went into industry, taking a job in the research labs at GE, where he worked for about four and a half years before getting a faculty appointment at MIT. He says working at GE helped him understand what it takes to translate an idea into a useful product. In 2015, he earned tenure as an associate professor in the Department of Mechanical Engineering.

He met his wife Manasa during a trip home to India after finishing his doctoral work. She came back with him to the U.S. and then pursued a MS specializing in nanoelectronics. They have one son and a daughter. Varanasi says that the original inspiration for LiquiGlide’s application to consumer products came from Manasa’s suggestion that there must be a better way to get honey out of a jar. “She is very much a part and parcel of everything I do here,” he says.

In addition to LiquiGlide, Varanasi has launched another startup company, in partnership with MIT professor of chemical engineering and Associate Provost Karen Gleason, called DropWise. The company is developing durable hydrophobic coatings for power plants and other industrial machinery, to boost their overall efficiency. He points out that 85 percent of the world’s electricity generators rely on steam cycles that are mostly powered by fossil fuels, so even a small improvement in their operating efficiency could have a significant impact on global greenhouse gas emissions.

“It has been absolutely terrific to be able to work with MIT students, postdocs, and colleagues,” he says. “It is a great pleasure to see the energy and passion that my students and postdocs bring to the table, and I am very thankful for their hard work and efforts — we are like a family solving these important problems and having fun doing so.”

“I’m really passionate about entrepreneurship and translating the research findings from my lab to useful products that provide societal benefit and create economic value,” Varanasi says. “Otherwise, the insights from research do not get used; you can create something unique, but then it can get lost. So getting to a proof of product is very important to me — not just a proof of concept.”

Fast Company reporter Adele Peters spotlights LiquiGlide, an MIT startup that has developed a non-toxic lubricant that can be used to ensure each drop of a product slides out of the bottle, lessening waste and making recycling easier. “We all think when we throw a bottle into a recycling bin it will get recycled, but recycling is almost impossible when product is left behind and you need a significant amount of water to clean it,” says Prof. Kripa Varanasi. “So the reality is that some of this packaging actually ends up in a landfill.”

The Economist spotlights how Colgate will be using the super slippery, food-safe coating developed by LiquiGlide, an MIT startup, to create a new line of toothpastes “that promise to deliver every last drop.” The Economist notes: “Besides pleasing customers who like to get their money’s worth, the new, slippery toothpaste tubes should help with recycling.”

In this article and video, BBC reporter Pallab Ghosh examines how MIT researchers have developed a coating that makes it possible to squeeze every drop of ketchup and toothpaste out of a container. “Because the coating is a composite of solid and liquid, it can be tailored to the product,” explains Prof. Kripa Varanasi.