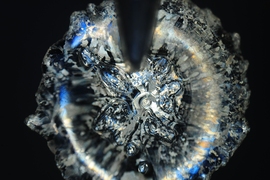 ↓ Download Image
Caption: MIT researchers have found a surprising new twist to the mechanics involved when droplets come in contact with surfaces. Pictured here is a microscopic top view of a droplet.

Caption:
MIT researchers have found a surprising new twist to the mechanics involved when droplets come in contact with surfaces. Pictured here is a microscopic top view of a droplet.

When freezing droplets impact a surface, they generally either stick to it or bounce away. Controlling this response is crucial to many applications, including 3-D printing, the spraying of some surface coatings, and the prevention of ice formation on structures such as airplane wings, wind turbines, or power lines.

Now, MIT researchers have found a surprising new twist to the mechanics involved when droplets come in contact with surfaces. While most research has focused on the hydrophobic properties of such surfaces, it turns out that their thermal properties are also crucially important — and provide an unexpected opportunity to “tune” those surfaces to meet the exact needs of a given application. The new results are presented today in the journal Nature Physics, in a report by MIT associate professor of mechanical engineering Kripa Varanasi, former postdoc Jolet de Ruiter, and postdoc Dan Soto.

“We found something very interesting,” Varanasi explains. His team was studying the properties of a liquid — in this case, drops of molten metal — freezing onto a surface. “We had two substrates that had similar wetting properties [the tendency to either spread out or bead up on a surface] but different thermal properties.” According to conventional thinking, the way droplets acted on the two surfaces should have been similar, but instead it turned out to be dramatically different.

This clip reveals the different behavior of droplets on materials that have different thermal properties. Identical droplets of molten tin impact a surface of fused silica (left) and one of zinc selenide (right). While the droplet on the left sticks to the surface, the one on the right displays fringes around the edge that show how the flattened droplet begins to curve upward and peel away. (Image: Varanasi Group/MIT)

On silicon, which conducts heat very well, as most metals do, “the molten metal just fell off,” Varanasi says. But on glass, which is a good thermal insulator, “the drops of metal stuck and were hard to remove.”

The finding showed that “we can control the adhesion of a droplet freezing on a surface by controlling the thermal properties” of that surface, he says. “It’s a whole new approach” to determining how liquids interact with surfaces, he adds. “It provides new tools for us to control the outcome of such liquid-solid interactions.”

To explain the difference in thermal conductivity of different materials, Varanasi gives the example of two flooring surfaces, one made of stone, another of wood. Even if both are at exactly the same temperature, if you step with bare feet on the wood, it will feel warmer than the stone. That’s because the stone has higher thermal effusivity (the rate at which a material can exchange heat) than wood, so it draws heat away from your feet more rapidly, causing it to feel colder.

The experiments in the study were carried out with molten metal, which is important in some industrial processes such as the thermal spray coatings that are applied to turbine blades and other machine parts. For these processes, the quality and uniformity of the coatings can depend on how well each tiny droplet adheres to the surface during deposition. The results likely apply to all kinds of liquids as well, including water, Varanasi says.

When coating surfaces, “the way droplets impact and form splats dictates the integrity of the coating itself. If it’s not perfect, it can have a tremendous impact on the performance of the part, such as a turbine blade,” Varanasi says. “Our findings will provide a whole new understanding of when things stick and when they don’t.”

The new insights could be useful both when it is desirable to have droplets stick to surfaces, such as in some kinds of 3-D printers, to help make sure each printed layer adheres thoroughly to the previous layer, and when it’s important to prevent droplets from sticking, such as on airplane wings in icy weather. The research could also be helpful for cleaning and waste management of additive manufacturing and thermal spray processes.

A droplet of molten tin is seen falling on a surface of silicon, left, which conducts heat well, and on glass, right, which is a thermal insulator. Under identical conditions, the solidified droplet on the silicon falls right off when the surface is tilted, whereas the droplet on glass adheres tightly to the surface. (Image: Varanasi Group/MIT)

Soto says the discovery came about when the team was studying the local freezing mechanism at the interface between the liquid and the substrate, using a thermal high-speed camera that revealed rapid effects during the cooling process that would have been impossible to see at longer timescales. The images showed a progressive development of fringes around the droplets’ outer edges. “We then realized that the droplet was unexpectedly curling up and detaching from the surface as it froze,” he says. They described this phenomenon as “self-peeling” of the droplets.

“The main ingredients for this phenomenon,” de Ruiter says, “are the interplay between short timescale fluid dynamics, which set the adhesion, and longer timescale thermal effects, which lead to global deformation.” The team developed a design map that captures different possible outcomes (sticking, self-peeling, or bouncing) in terms of key thermal properties: drop and substrate effusivities, and temperatures.

Since the degree to which droplets stick or don’t depends on a material’s thermal properties, it’s possible to tailor those properties based on the application, Soto says. “We can imagine scenarios where thermal properties can be adjusted in real time through electric or magnetic fields, allowing the stickiness of the surface to impacting droplets to be adjustable.”

The sticking outcome can also be controlled simply by changing the relative temperatures of the droplets and the surface, the team found. In many cases, these changes are counterintuitive: For example, while one might expect that the only way to prevent sticking of freezing droplets is by warming a substrate, the team found a new regime, where cooling the surface can also lead to the same outcome.

The research was supported by Alstom and a Rubicon fellowship from the Netherlands.