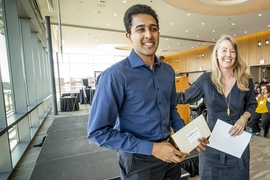 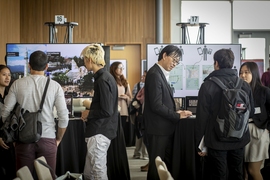 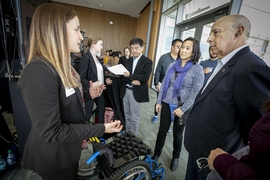 ↓ Download Image
Caption: Loop team members Sarah Tress (left) and Shannon McCoy (second from left), both juniors in mechanical engineering at MIT, explain to attendees their wheelchair cushion made of readily available and inexpensive bicycle inner tubes that aims to prevent pressure sores. The team took home a $7,500 prize from the competition for their invention.
Credits: Photo: Rose Lincoln 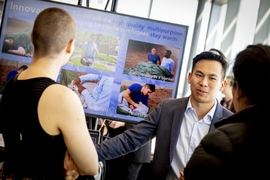 ↓ Download Image
Caption: A team member of TravlerPack, which won a $10,000 prize, explains to attendees the team's water-resistant sleeping bag for refugees that withstands extremely cold temperatures, comes equipped with mosquito nets, and can be zipped together with other bags to fit entire families.
Credits: Photo: Rose Lincoln

Caption:
Loop team members Sarah Tress (left) and Shannon McCoy (second from left), both juniors in mechanical engineering at MIT, explain to attendees their wheelchair cushion made of readily available and inexpensive bicycle inner tubes that aims to prevent pressure sores. The team took home a $7,500 prize from the competition for their invention.
Credits:
Photo: Rose Lincoln

Caption:
A team member of TravlerPack, which won a $10,000 prize, explains to attendees the team's water-resistant sleeping bag for refugees that withstands extremely cold temperatures, comes equipped with mosquito nets, and can be zipped together with other bags to fit entire families.
Credits:
Photo: Rose Lincoln

Grand prize winner of $15,000 went to Umbulizer, a team developing a low-cost, portable ventilator — made by modifying and simplifying the machinery — for patients in rural areas where medical resources are scarce and unreliable.

An additional nine winners, chosen by a team of judges that include seasoned entrepreneurs and venture capitalists, received four $10,000 awards and five $7,500 awards.

Traditional ventilators come with about 20 different functions, which make them complex and expensive. Second-hand ventilators, which low-resource hospitals tend to buy, can run up to $15,000 to $20,000, the Umbulizer team said. The alternative is a $40 hand-operated ventilator, called an “artificial manual breathing unit,” or AMBU bag, which requires constant manual pumping.

“People end up getting those AMBU bags, which are dangerous for lungs because you cannot regulate the volume or the pressure,” team member Wasay Anwer, a junior in mechanical engineering at MIT, told MIT News. “That’s where our device comes in.”

The Umbulizer team — including Sanchay Gupta, a Harvard Medical School student, and Hamza Khan, a Harvard Business School student — is developing an automated ventilator that keeps only four critical functions, reducing the price to around $2,000. “We talked to doctors in Pakistan and they said 90 percent of the patients only need four of the core functions of traditional second-hand ventilators. Our device provides those core functions at about 10 percent of the price,” Anwer said.

The team has a working prototype and aims to pilot the device at a major Pakistan hospital in the summer. “The [IDEAS] prize money will go a long way to helping us developing the final version of that prototype,” Imam said. “It will also help us find local manufacturers, because our end goal is to mass manufacture this device.”

Throughout Saturday afternoon, 40 teams showcased innovations in the Samberg Conference Center in nine categories: water and sanitation, education and training, agriculture and food, health and medical, emergency and disaster relief, infrastructure, energy and environment, mobile devices and communication, and finance and entrepreneurship.

A team of three MIT mechanical engineers, Loop, took home a $7,500 prize for tackling an issue that is little known and affects people who use wheelchairs in developing countries: preventable pressure sores.

According to the World Health Organization, life expectancy for people with spinal cord injuries in many developing countries is as low as one year. A leading cause of death is, surprisingly, infected sores caused by sitting in wheelchair seats that cause the patient’s weight to be unevenly distributed. Sores are easily prevented with high-quality air cushions that prevent pressure concentrations. But these can cost upward of $400, which is out of reach for many people in developing countries. Lower-cost cushion options are somewhat ineffective, according to Loop.

Loop is developing a cushion made of readily available and inexpensive bicycle inner tubes that are looped through a grid of holes in a plastic base. In testing, the team said its cushion prevents pressure concentrations as well as expensive, high-quality cushions do. The team hopes that when it reaches manufacturing scale it can sell its cushions for as low as $5 each.

“The goal is that high-quality seat cushion will be available to anybody regardless of price,” team member Sarah Tress, an MIT junior in mechanical engineering, told MIT News. The other team member is Shannon McCoy, also an MIT junior in mechanical engineering. With the prize money, Loop will bring its prototype to Bali this summer to test the design and gain feedback for further refining.

The eight other winners were:

This year, more than 500 interested students attended dinners and other events, many sponsored the Bose Corporation, where they learned from past IDEAS winners and entrepreneurial mentors, pitched ideas, and recruited team members. IDEAS also awarded 25 teams funding throughout the year to help them build prototypes.

Over its 17 years, IDEAS, organized annually by the Priscilla King Gray (PKG) Public Service Center, has awarded more than $1 million to 160 teams that now impact more than 2.5 million people in 44 countries. Winners have gone on to secure more than $42 million in additional funding.

Some of last year’s winners have already field-tested a motorcycle ambulance in rural Tanzania, initiated trials of an opioid addiction recovery app at the Boston Medical Center, began testing a prosthetic knee that allows patients to sit cross-legged, and completed a design of a solar-powered education hub soon to be installed in the Ecuadorian Amazon.

Past IDEAS winners were on hand at the ceremony to present awards to and provide brief remarks about their startups’ progress and the long-lasting impact of IDEAS. One, keynote speaker Sean Grundy, co-founder of Bevi, won a $7,500 prize at the 2013 IDEAS competition for developing smart flavored-beverage refill machines that aim to help eliminate plastic bottles. With machines now in more than 2,000 offices nationwide, the startup saves more than 2 million plastic bottles per month, Grundy said.

Grundy attributed some of Bevi’s success to participating in IDEAS, which provided his team early motivation and support. “You guys are dealing with the most inspirational and most useful people to get involved with on campus,” he told the teams in the audience. “Especially during the early stages, someone to help you stay motivated is so important.”