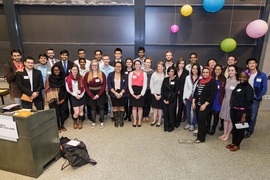 At the annual IDEAS Global Challenge Awards ceremony last night, 11 MIT teams were awarded a total of $75,000 to bring novel technologies and new educational models to the developing world.

Now in its 14th year, IDEAS has awarded more than $650,000 to 117 social ventures that have collectively raised an additional $17 million and operate in 43 developing countries, “affecting hundreds of thousands of people,” event organizer Keely Swan said to the crowd gathered in Room 10-250.

“Simply put, IDEAS is the application of MIT’s mission,” added Swan, a staffer in MIT’s Public Service Center. “IDEAS teams are working wisely, effectively, and creatively for the betterment of humankind.”

But education was also a big winner for the night, with four winning teams having designed innovative education models to implement around the globe: MIT-Kepler Education Laboratory, which is building experiment labs in Rwanda, and Prepify, which developed more accessible SAT prep software, each won $5,000. RARE Education, which plans to incorporate online-learning services into physical classrooms in rural Kenya, and Latin American Science Education Network, which recruits graduate students to teach science classes across Latin America, each won $7,500.

In total, 59 teams went through the IDEAS competition process, which included workshops; proposal reviews; judging rounds, based on a venture’s feasibility, business plan, and pitch; and “speed mentorship” dinners, where teams could network and solicit advice from employees of Bose Corporation. For last night’s competition, the number was winnowed down to 40 finalists competing across eight categories: finance and entrepreneurship, energy and environment, mobile, agriculture, education, health, water, and housing and transportation.

Preceding the event was the IDEAS Innovation Showcase, held last Friday, where all finalists had the opportunity to display their ideas to judges, fellow competitors, and passersby in the Stata Center.

The keynote speaker at the competition was a 2012 IDEAS winner, Bilikiss Adebiyi MBA ’12, founder and CEO of Wecyclers, a startup that deploys cargo bikes to collect recyclables from villages in Lagos, Nigeria, for delivery to processing plants.

Devin Currie, a member of the Navi-Chem team and a postdoc in chemical engineering, said the team plans to use the $10,000 to develop a small reactor for MIT that could potentially convert the Institute’s food waste into valuable acids.

Based in MIT’s Department of Chemical Engineering, Navi-Chem has developed several low-cost, 15-liter reactors that use biological processes to convert waste into polylactic acid, which can be used to make biodegradable cups, 3-D printer filament, medical implants, and other objects. “From that, we’re offsetting petrochemical use and, at the same time, we’re diverting waste from landfills to a usable product,” Currie said.

The team’s ultimate goal is to develop large-scale reactor facilities in India, which could process about 5 tons of waste per day. The MIT reactor will be smaller, “but it’s an environmentally superior process to composting and brings a lot of value to the table,” Currie said. “Where we currently pay to have our food waste removed, we could convert it to something that might help the environment and help MIT.”

During his pitch, team member Prithiviraj Sundararaman, a graduate student in mechanical engineering, described Sensen as a small sensor system the gathers real-time data on the performance and usage of small stoves and other products in Uganda — primarily to provide quantitative data for funding agencies.

Current tracking methods use surveys, which are time-consuming and often inaccurate, because they are based on consumers’ accounts of time spent using products. The sensors will track temperature, air quality, and humidity — all indications of a stove’s usage and performance. That information is uploaded to a platform, so funding agencies that support these products can see their impact. The team is currently partnering with a Ugandan organization that makes stoves for a local community.

“We envision using sensors as a way to better understand product usage and understand the impact these products are having on the ground,” Sundararaman said, in accepting the grand prize.

“Money, as you know, can go a long way, and we hope to create impact with that money,” he added.

Among the winning education-focused teams was MIT-Kepler Education Laboratory, which is designing a low-cost laboratory to teach hands-on, college-level physics and chemistry to budding scientists and engineers at Kepler, a new university in Rwanda.

Across Africa, and especially Rwanda, where only a small percentage of the population attends college, there is little “practical education” at the college level, which stifles innovation, said team member Jakob Dahl, a senior majoring in chemistry, during his pitch.

This summer, the team will renovate a building near Kepler, construct equipment, and train teachers, with aims of teaching classes next year.

The aim, Dahl said, “is to teach students how to reason through an experimental process, and actually go from a demo, or an idea, to something that you can actually use.”

Singing the praise of the contest were several past IDEAS winners who have built successful ventures, and who were on hand to present awards to the new up-and-comers.

Presenter Sean Grundy MBA ’13 said his company, Bevi, essentially got its start at IDEAS. Bevi builds touch-screen machines that purify and create flavored, sparkling, and vitamin-based water, with the aim of cutting the use of disposable plastic bottles.

Today Bevi has gone through two successful funding rounds, and has grown to seven employees. “But this was literally the very first money for the company, before we incorporated, and it meant the world to us,” Grundy said.

Coincidentally, Grundy presented a $7,500 award to one of his former Bevi interns, mechanical engineering junior Jessie Press-Williams of change:WATER, which developed a system to remove water from human waste to shrink its mass, making the waste easier to ship and manage.

Through IDEAS, Lewandowski said, DDG earned its first funding and established two important connections, with a physician at Massachusetts General Hospital and a local investor. In presenting, Lewandowski offered up advice to the crowd of hopeful entrepreneurs: “Be resourceful. I urge you to lean on MIT as much as possible, and lean on IDEAS.”

MIT students showcase innovative ideas for the betterment of humankind