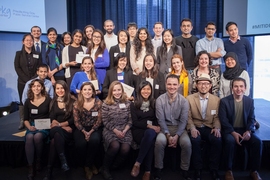 ↓ Download Image
Caption: All the winners of the 2016 MIT IDEAS Global Challenge, held on April 2. Grand-prize winner Malena Gonzalez of ValueMe is in the second row, second from the left.
Credits: Photo: Ben Bocko 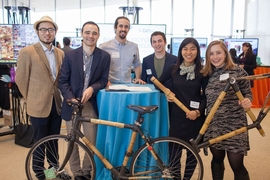 ↓ Download Image
Caption: The Bamboo Bicycles Beijing (BBB) team display their bamboo bicycles at the innovation showcase. BBB, which won a $5,000 prize, holds workshops to teach people in Beijing how to build bikes with frames made entirely of bamboo.
Credits: Photo: Ben Bocko 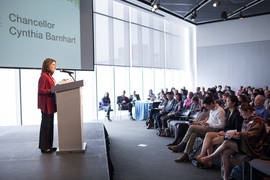 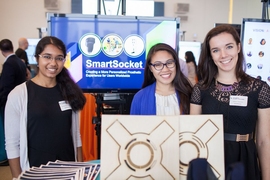 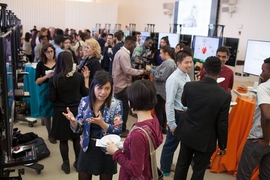 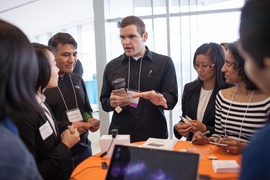 Caption:
The Bamboo Bicycles Beijing (BBB) team display their bamboo bicycles at the innovation showcase. BBB, which won a $5,000 prize, holds workshops to teach people in Beijing how to build bikes with frames made entirely of bamboo.
Credits:
Photo: Ben Bocko

Caption:
Students in the final stage of MIT IDEAS competition present their projects to judges and visitors at the innovation showcase.
Credits:
Photo: Ben Bocko

Imagine if, upon paying for your groceries, you received not just your cash receipt but also a receipt detailing your groceries’ nutritional information. That’s the concept behind an innovation that won first place at the 15th annual IDEAS Global Challenge, held Saturday in the MIT Media Lab.

ValueMe, co-founded by two MIT Sloan School of Management students, earned the $15,000 award — and high praise from judges — for inventing an app that gives food shoppers “nutrition receipts” for their purchased groceries, and tells them if the foods in their cart are lacking in essential nutrients.

IDEAS is an annual competition that provides MIT’s social entrepreneurs with mentorship and resources to launch social enterprises. This year, 46 teams competed in nine categories: water and sanitation, education and training, agriculture and food, health and medical, emergency and disaster relief, housing and transportation, energy and environment, mobile devices and communication, and finance and entrepreneurship.

ValueMe team member Malena Gonzalez, a student in MIT’s Executive MBA Program, said the team’s app is powered by an algorithm that leverages data from the U.S. Department of Agriculture’s National Nutrient Database. In so doing, the app can analyze someone’s groceries for missing vitamins, minerals, protein, and carbohydrates needed to fulfill a preset diet. By partnering with the American Association of Retired Persons, ValueMe also plans to incentivize buyers with discounts for buying healthier foods.

The team aims to partner with supermarkets to integrate their system at registers. At check-out, a person will swipe their insurance card, and the system will recognize the person and analyze all food items purchased for nutritional value. This information will be sent to the buyer’s app. “When they’re printing your receipt, [you] will receive a nutrition snapshot of everything that you purchased and it will analyze if there are components or nutrients that are missing in your diet,” Gonzalez said. “This provides, at the point of sale, education for consumers on how healthy they’re eating.”

In presenting the award to ValueMe, Ben Sanchez, co-founder of the Latin American Science Education Network, which won a $7,500 prize at last year’s IDEAS competition, said judges called the concept “more innovative than anything they have seen in the history of the competition.” One judge noted that ValueMe “could trigger a systematic change in the food industry,” Sanchez said.

ValueMe will put the IDEAS prize money toward a pilot program with a grocery store in Philadelphia, according to Gonzalez. The other ValueMe team member is executive MBA student Tomasz Grzegorczyk, a former researcher in MIT’s Research Laboratory of Electronics, who has a background in data analytics.

In its 15-year history, IDEAS has awarded more than $750,000 to 128 teams, more than half of which are still active in 44 countries as for-profit and nonprofit firms. Winners have gone on to secure more than $40 million in additional funding.

This year, 64 teams submitted innovations for IDEAS. Participating teams received guidance from IDEAS mentors and participated in workshops, dinners, and other events to learn from seasoned entrepreneurs.

All 46 finalist teams displayed their innovations to judges and around 150 attendees during a showcase before the awards ceremony. Each team had a large monitor for presentations about their innovations, and some displayed working prototypes.

Undergraduate team SmartSocket showed off some prosthetic limbs created with locally sourced materials to make them more affordable and comfortable for people in developing countries. One of their leg prostheses was made from plastic and lined on the inside with mushrooms, which keep the device springy and conform with a person’s leg. An antimold component keeps the mushrooms fresh for 30 days, and then they can be easily replaced.

SmartSocket team member Krithika Swaminathan, a junior studying mechanical engineering, said IDEAS was “a great way to kickstart prototyping … and finally [invent] something that will actually be a product.”

Keely Swan, administrator for the the IDEAS Global Challenge in MIT’s Public Service Center, said the showcase and awards ceremony together represent good opportunities for student teams to gather more feedback from judges, peers, and others. “That feedback will help them develop as they continue forward,” Swan said.

Many award presenters were previous IDEAS winners, who praised the competition for kickstarting their commercial ventures. Among those was Scot Frank, co-founder of One Earth Designs, a 2008 IDEAS winner that develops solar cookers for developing countries.

The competition, Frank said, provided his team with sage startup advice and offered “a stamp of approval” from MIT for commercializing the invention. The company’s solar cookers are now being sold in 30 countries. “It really goes to show what the IDEAS competition can do for the ideas that are here in this room and here as part of the MIT community,” Frank said.

In her welcoming remarks, Chancellor Cynthia Barnhart praised the competing students’ ingenuity. “You’ve recognized some of humanity’s most pressing problems and you’ve gotten to work solving them,” Barnhart said. “Thank you for embodying the most important MIT tradition of all: using your knowledge to make the world better for this generation and the ones that follow.”

A team of MIT students has developed a device that can convert text to braille in real-time, reports Devin Thorpe for Forbes. Undergrad Jialin Shi explains that the team hopes the device “will be able to increase the braille literacy rate, and in turn, increase the employment rate of adults with significant vision loss.”

Boston Magazine reporter Jamie Ducharme writes that a team of MIT students has developed an app that provides shoppers with a nutrition receipt for grocery store purchases. The app is based on an algorithm that could “parse through data from the USDA’s National Nutrient Database, assessing the nutritional value of each item in the shopper’s cart.”

Celebrating 15 years of innovating for the greater good