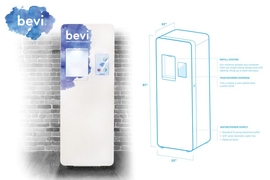 ↓ Download Image
Caption: Bevi is a smart beverage-dispensing machine — made with high-quality components inspired by medical devices — that filters and adds carbonation and customizable flavors to tap water in offices, gyms, and hotels.

Caption:
Bevi is a smart beverage-dispensing machine — made with high-quality components inspired by medical devices — that filters and adds carbonation and customizable flavors to tap water in offices, gyms, and hotels.

MIT spinout Bevi believes it can cut the world’s use of bottled drinks with a smart beverage machine of the same name that delivers high quality, flavored water — straight from the tap.

Americans buy about 29 billion water bottles per year, and manufacturers use roughly 17 million barrels of crude oil to produce those bottles. One of every six water bottles used in the U.S. is recycled, and the rest are sent to landfills or end up littered on land and in rivers, lakes, and the ocean, where they can take hundreds of years to disintegrate. Delivering bottled beverages in trucks also produces a lot of carbon emissions.

Dubbed by some media as an “ecofriendly water cooler,” Bevi is a smart beverage-dispensing machine — made with high-quality components inspired by medical devices — that filters and adds carbonation and customizable flavors to tap water in offices, gyms, and hotels.

According to the startup, Bevi machines located nationwide have saved more than 4 million plastic bottles from ending up in landfills, and each machine can potentially eliminate the use of 35,000 plastic bottles per year. The company is also shipping machines to Hong Kong and Singapore for pilot testing in the coming months.

As each Bevi machine is Internet-connected, the startup can leverage real-time data to provide proactive services and maintenance and gather insightful — and sometimes unexpected — data on beverage choice among demographic groups and across regions to refine its product.

Already in 600 locations in Boston, New York, and San Francisco, the Bevi machines are starting to see rapid adoption across all major U.S. cities thanks to a deal with major vending company Canteen signed in December.

“It seems like every week now we’re in a new state,” says MIT Sloan School of Management alumnus Sean Grundy MBA ’13, who co-founded the startup and co-developed the machines with classmate Frank Lee MBA ’13 and Rhode Island School of Design graduate Eliza Becton.

Standing a slim five feet tall, the Bevi machines are hooked up to a tap water source. Water runs through the machine’s custom filtration system. Consumers can select from flavors of still and sparkling water, such as unsweetened raspberry or lime, pomegranate, and kiwi-strawberry. A sliding scale on the touchscreen adjusts sweetness.

Bevi contains components of a traditional soda fountain. But in order to keep the beverage quality high to compete with the bottled-drink industry, Grundy says, the startup took inspiration from a surprising source — medical devices.

In early market research, the Bevi co-founders heard two major complaints about traditional soda fountain flavors. One, drinks from soda fountains often taste very different with each pour, due to different levels of carbonation, flavor dilution, and other aspects. Also, multiple drinks share the same nozzle, so the flavors will often blend.

A reason for these quality issues is that typical soda fountains use analog pumps that are manually adjusted to push concentrate into a stream of water with no real consistency. Over time, the pumps also shift in place and the quality of drinks changes.

The team decided, instead, to custom-make a beverage-mixing system using traditional components and peristaltic pumps typically used in medical devices such as dialysis machines, to digitally control doses. “When you’re dispensing life-saving medications into a blood stream, you can’t one day dispense a little too much, and another day too little. Standards are much higher,” Grundy says.

By using Bevi’s touchscreen sliding scale, consumers adjust the speed at which the peristaltic pumps dispense concentrate into the water, delivering an exact concentration of flavor.

A secondary benefit of using digital pumps, Grundy adds, is they allow the startup to remotely monitor concentration levels. When quantities are low, an alert is sent to the operations team via software in the Bevi offices in Boston and San Francisco. “From a service standpoint, we can then optimize our route before we hit the road,” Lee says. “That actually helps up to optimize costs in terms of service and delivery routes.”

This remote monitoring also drastically limits physical visits to the machines, which reduces operation costs. “That lets us be profitable in a whole host of locations that traditional beverage machines would have a hard time operating in,” Lee says. Those include midsized venues without much foot traffic, such as offices, gyms, and hotels.

Initially, Bevi used the data to monitor the machines for functionality and service updates. “But that’s evolved in a big way, where we use this technology to make business decisions,” Grundy says.

Data, for instance, reveal how flavors fare across locations. If a client orders a certain flavor because it sounds good, but it’s not performing well, the startup may discontinue the flavor or tweak its formula.

This flavor data has led to some surprising insights into beverage choice in regions and among demographics. A couple years ago, for instance, Bevi received some distribution advice from the vending industry. The suggestion was to ship sweeter flavors to a startup with young workers and to ship more zero-calorie, unsweetened options to an insurance company with older employees.

“We found the flavor choice was exactly the reverse,” Grundy says. “In the young company, the healthy, zero-calorie options did really well, and people weren’t touching the sweet drinks. In the older demographic, everyone was shying away from the unsweetened drinks and wanted things more reminiscent of traditional soft drinks. That was one interesting example where the data proved the status-quo opinion to be wrong.”

Grundy, Lee, and Becton came together at MIT Sloan to disrupt the plastic-bottle supply chain, in which bottles are filled with tap water at bottling plants, sometimes mixed with ingredients, and then shipped around the world to consumers. “We thought that was a ridiculous supply chain,” Grundy says. “It was obvious there were opportunity for efficiency.”

The initial idea was to change consumer drinking behavior with better technology and design. This led to some “embarrassing” prototypes, Lee says. In one iteration, the team invented a “Redbox” for water, modifying a snack vending machine to dispense reusable water bottles that could be returned at any other machine, which would sanitize them for reuse. It was massive, cumbersome, and rather ugly.

Yet the innovative prototype earned the team (then named ReFresh) a $7,500 prize at the 2013 IDEAS Global Challenge, which led to more testing. “Even though the prototype was embarrassing, we pushed it out to market,” Lee says. “That’s what we did right. We forced ourselves to get it out there and learn from it.”

In early 2014, Bevi, then at Greentown Labs in Somerville, Massachusetts, realized people in offices generally carry glasses or mugs, so a massive bottle-dispensing machine was unnecessary. There, they created a prototype for today’s Bevi machine. In late 2014, Bevi delivered its first commercial machine to the office of the MIT Venture Mentoring Service, which had helped the co-founders launch their company. There are now four Bevi machines on MIT’s campus.

Over the past couple of years, Grundy says he’s personally seen the impact Bevi has had. When he visits clients, some will show him now-empty storage rooms that were once filled with bottled water. Recently, a client in New York replaced all of its refrigerators on seven floors with Bevi machines, saving plastic bottles, delivery fuel, and energy to keep the water cold.

“One of the exciting things working on this startup is that the impact is real. You see it every time you walk into an office,” Grundy says.