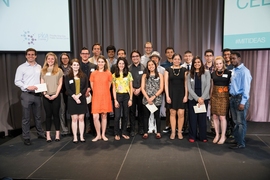 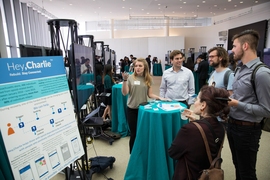 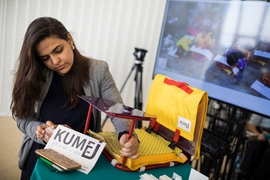 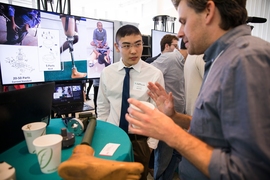 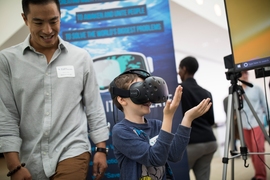 ↓ Download Image
Caption: An attendee takes a virtual tour of a flooded Florida coast, with technology from Before It's Too Late, a team creating virtual-reality simulations that demonstrate the impact of climate change on the world.
Credits: Photo: Dominick Reuter

Caption:
An attendee takes a virtual tour of a flooded Florida coast, with technology from Before It's Too Late, a team creating virtual-reality simulations that demonstrate the impact of climate change on the world.
Credits:
Photo: Dominick Reuter

Ten MIT student teams developing innovations to improve the lives of people around the world split awards totaling $95,000 — including a top prize for an app that tackles the U.S. opioid epidemic — at the annual IDEAS Global Challenge showcase and awards ceremony.

Throughout Saturday afternoon, 40 teams showcased innovations in the MIT Media Lab in eight categories: water and sanitation, education and training, agriculture and food, health and medical, emergency and disaster relief, housing and transportation, energy and environment, mobile devices and communication, and finance and entrepreneurship.

Among the many innovative projects were drones that deliver disaster relief packages or capture images of villages for planning purposes; robotics and analytics technology that mines sewers for health data; a braille e-reader for the blind; novel solar-powered desalination technology; apps that track personal carbon emissions or help dairy farmers track milk production; and medical devices that analyze nutritional content of breast milk or simplify medication dosing for illiterate caregivers.

The $15,000 prize went to Hey, Charlie, a team fighting the opioid-addiction epidemic in Massachusetts and across the nation with a behavioral modification app for people struggling with addiction.

Opioid-related deaths in Massachusetts quadrupled from 2000 to 2015; now at 25 deaths per 100,000 residents, they are more than double the national average, according to Massachusetts Health and Human Services. Nationally, opioid overdoses caused 33,000 deaths in 2015, according to the Centers for Disease Control and Prevention.

Hey, Charlie, which started as a project for the MIT Hacking Medicine hackathon last year, passively collects data from smartphones to help people struggling with addiction connect more with supportive people and distance themselves from unhealthy relationships. If a person who may not be an effective source of support contacts the patient, for example, the app sends a text alert. It will also send an alert if the patient hasn’t talked to a positive influence in a while. The app also provides data to therapists or social workers if, say, the patient has engaged in a certain number of risky communications recently.

The aim is to change the social networks and behavior of people struggling with addiction. “Pretty much anyone you talk to has someone close to them [struggling] with addiction,” team member and app co-developer Emily Lindemer, a PhD student in the Harvard-MIT Division of Health Sciences and Technology, told MIT News. “We have to look at [addiction] as a social disease that can’t be fixed simply with a pill.”

Using the money, the team will pilot the platform at the Boston Medical Center and start trials at treatment centers to scientifically validate patient outcomes. By providing funding and support to entrepreneurs at the crux of social change and health care, IDEAS provided the perfect commercial launch point for the team, Lindemer said: “The mission is so in line with what we want to do.”

IDEAS also provided a helpful development platform for the Okoa Project, which won a $10,000 award for engineering a custom ambulance cart that attaches to motorcycles in rural Tanzania, where ambulances are scarce but motorcycles are ubiquitous. The cart — a covered, two-wheeled trailer equipped with a stretcher — started as a D-Lab project but really took shape commercially while the team prepared for IDEAS, said team member Sade Nabahe, a mechanical engineering student.

“The most valuable thing we gained was the questions we had to answer in preparation for IDEAS: How do you plan on implementing it? What are your key challenges? Who are our customers?” Nabahe told MIT News, while a group of attendees examined the team’s prototype located nearby on the showcase floor. “It made us think more about the bigger picture.”

This year, more than 500 students participating in IDEAS attended dinners and other events, many sponsored the Bose Corporation, where they learned from past winners and entrepreneurial mentors, pitched ideas, and recruited team members. IDEAS also awarded 25 teams funding throughout the year to help them build prototypes.

Over its 16 years, IDEAS, organized annually by the Priscilla King Gray (PKG) Public Service Center, has awarded $850,000 to 140 teams that now reach more than 100,000 people in 44 countries. Winners have gone on to secure more than $42 million in additional funding. Some of last year’s winners have already taught 400 people to make bamboo bicycles in China, digitized artwork of more than 800 rural artists in Indonesia and India, and made online learning accessible for 4,000 students in Ghana.

Several past winners were on hand at the ceremony to present awards to newcomers and provide brief remarks about their startups’ progress and the long-lasting impact of IDEAS.

Harvard University graduate Jackie Stenson won a 2012 IDEAS prize with Essmart Global, an Indian technology-distribution startup she co-founded with MIT alumna Diana Jue Rajasingh ’09, SM ’12. Today, the startup has sold more than 25,000 products in the country. “The only reason we got started was IDEAS,” Stenson said. “This was our first validation and first real chunk of funding that basically told us, ‘You should get started.’”

About half of all winning IDEAS teams remain active in some way. But, even if teams disband, the positive influence of IDEAS stays with the members, said Brian Spatocco PhD ’15, who won an IDEAS prize in 2013 for GridForm, which developed software to optimize microgrid installations in rural India. The technology led to the construction of several microgrids in the country — which still service more than 1,000 people — before the startup broke up.

“We are no longer together, but the impact of IDEAS actually continues on in our team,” Spatocco said. One team member became a professor of social good at Carnegie Mellon University, while another stayed in India to build a new startup. Spatocco now works at an agriculture startup making fertilizer affordable throughout the world. “For us, the take-away has always been: It’s not just the idea, it’s always what [the IDEAS program] does to the people,” he said.

“The money is the topping on the sundae, for sure,” she said. “But the way this program is designed makes it a unique learning experience whether you win an award or don’t win an award. Preparing MIT students to change the world in positive ways is what IDEAS and the PKG Center are all about.”