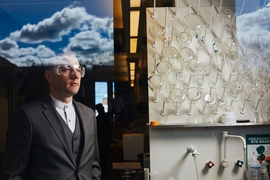 ↓ Download Image
Caption: Since joining the MIT faculty in 2011, Brad Pentelute has continued working on anthrax, hoping to develop it as a possible vehicle for delivering drugs across not only cell membranes but also the blood-brain barrier.
Credits: Image: Jared Charney 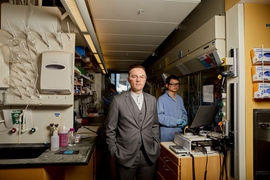 ↓ Download Image
Caption: Since joining the MIT faculty in 2011, Brad Pentelute has continued working on anthrax, hoping to develop it as a possible vehicle for delivering drugs across not only cell membranes but also the blood-brain barrier.
Credits: Image: Jared Charney

Caption:
Since joining the MIT faculty in 2011, Brad Pentelute has continued working on anthrax, hoping to develop it as a possible vehicle for delivering drugs across not only cell membranes but also the blood-brain barrier.
Credits:
Image: Jared Charney

Scientists who want to treat disease by delivering large proteins such as antibodies or enzymes to cells have struggled to overcome one major bottleneck: getting the proteins to cross cell membranes so they can enter the target cells. In the search for new ways to deliver such drugs, MIT associate professor of chemistry Brad Pentelute has turned to an unlikely ally — the anthrax toxin.

The bacterium Bacillus anthracis has very efficient machinery for penetrating cell membranes and injecting toxic proteins into cells. Pentelute, who has studied this process since his years as a postdoc at Harvard Medical School, decided to enlist this toxin, which he renders harmless by modifying two of the three proteins that form the toxin.

“We disarm it and remove all of its toxic functionality, but still maintain the delivery mechanism. Then we hijack that system to deliver proteins, peptides, and other molecules into specific cell types,” Pentelute says.

Using this and other innovative approaches to crossing cell membranes, Pentelute hopes to devise new ways to deliver not only large proteins but also nucleic acids such as RNA and DNA, which could be used to correct genetic mutations or reduce expression of a disease-causing gene. His lab also designs novel proteins that could be utilized to treat disease, using a variety of chemical modifications.

“We’re a lab that really tries to use chemistry to solve problems in biotechnology,” he says. “We can use a variety of techniques to change the chemistry of these proteins so they have different structures and functionalities.”

A native of San Diego, Pentelute began his undergraduate career at the University of Southern California as a psychology major. However, after taking some chemistry courses, he decided to add a chemistry major and began working in an organometallic chemistry lab. After graduating from USC, he went to the University of Chicago to study bioorganic chemistry, a field that employs chemical methods to study biological phenomena.

As a graduate student, Pentelute studied a subset of proteins called antifreeze proteins, which inhibit ice formation and help organisms such as the snow flea survive in subfreezing temperatures. At the time, no one had discovered the structure of these proteins, but Pentelute found a way to crystallize them so that he could use X-ray crystallography to analyze their structure.

In doing so, he made an unexpected discovery. Amino acids, the building blocks of proteins, can exist in two different configurations, known as L and D. The L and D versions of a particular amino acid have the same chemical composition but are mirror images of each other. Cells use only proteins made from L amino acids, but Pentelute found that if he synthesized the L and D configurations of the antifreeze protein, the resulting mixture was much more likely to crystallize.

“In some cases, proteins are difficult to crystallize, so we found a little bit of a trick: If you could chemically synthesize the mirror image form, then you’re more likely to get crystal formation than if you have the pure L form alone, just because of the packing considerations of how the crystal can form,” Pentelute says. “That turned out to be a fun, unexpected path of the research program.”

After finishing his PhD, Pentelute joined a startup company that was designing new peptides for treating diabetes. During the nine months he spent there, he decided that academic research was a better fit for him. “I realized I had a passion for academic-based research, where you have the freedom to do basic science, and when unexpected discoveries come up you can pursue them,” he says.

Pentelute returned to the academic world as a postdoc at Harvard Medical School, where he first began working on the anthrax toxin. Working with John Collier, Pentelute helped to discover how the anthrax toxin is able to penetrate cell membranes.

Since joining the MIT faculty in 2011, Pentelute has continued working on anthrax, hoping to develop it as a possible vehicle for delivering drugs across not only cell membranes but also the blood-brain barrier. This barrier, which separates circulating blood from the brain, makes it very difficult to deliver drugs to the brain.

Pentelute’s lab is also developing novel proteins not found in nature, by stringing together amino acids of the D configuration, including some novel amino acids not used by cells. Using this approach, Pentelute and his students can create libraries of millions of proteins that they then screen for effectiveness against a range of diseases.

To help with the large-scale protein production needed for all of these projects, Pentelute’s lab has also invented a new tabletop machine that can string together amino acids using chemistry, to synthesize the desired proteins within minutes. He recently launched a company called Amide Technologies, located in Kendall Square, that is working toward commercializing the peptide synthesis technology.

Being in such close proximity to the biotechnology and pharmaceutical companies surrounding MIT is one of the major features that drew Pentelute to the Institute.

Yo-yos offer a first foray into manufacturing at scale

Students in 2.008 (Design and Manufacturing II) learn about manufacturing processes for everyday products, and work in teams to design their own yo-yos.

Tough as plastic wrap but elastic like a balloon, the lining could be a target for therapies to limit cancer cells from spreading.