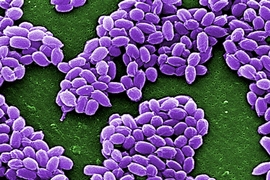 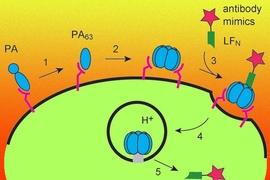 ↓ Download Image
Caption: This schematic shows the assembly of anthrax PA proteins into a pore on the surface of a target cell. Scientists at MIT have commandeered these pores to deliver drugs called antibody mimics into cells, where they can interfere with disease-causing proteins.
Credits: Image courtesy of the researchers

Caption:
This schematic shows the assembly of anthrax PA proteins into a pore on the surface of a target cell. Scientists at MIT have commandeered these pores to deliver drugs called antibody mimics into cells, where they can interfere with disease-causing proteins.
Credits:
Image courtesy of the researchers

Bacillus anthracis bacteria have very efficient machinery for injecting toxic proteins into cells, leading to the potentially deadly infection known as anthrax. A team of MIT researchers has now hijacked that delivery system for a different purpose: administering cancer drugs.

“Anthrax toxin is a professional at delivering large enzymes into cells,” says Bradley Pentelute, the Pfizer-Laubauch Career Development Assistant Professor of Chemistry at MIT. “We wondered if we could render anthrax toxin nontoxic, and use it as a platform to deliver antibody drugs into cells.”

In a paper appearing in the journal ChemBioChem, Pentelute and colleagues showed that they could use this disarmed version of the anthrax toxin to deliver two proteins known as antibody mimics, which can kill cancer cells by disrupting specific proteins inside the cells. This is the first demonstration of effective delivery of antibody mimics into cells, which could allow researchers to develop new drugs for cancer and many other diseases, says Pentelute, the senior author of the paper.

Antibodies — natural proteins the body produces to bind to foreign invaders — are a rapidly growing area of pharmaceutical development. Inspired by natural protein interactions, scientists have designed new antibodies that can disrupt proteins such as the HER2 receptor, found on the surfaces of some cancer cells. The resulting drug, Herceptin, has been successfully used to treat breast tumors that overexpress the HER2 receptor.

Several antibody drugs have been developed to target other receptors found on cancer-cell surfaces. However, the potential usefulness of this approach has been limited by the fact that it is very difficult to get proteins inside cells. This means that many potential targets have been “undruggable,” Pentelute says.

“Crossing the cell membrane is really challenging,” he says. “One of the major bottlenecks in biotechnology is that there really doesn’t exist a universal technology to deliver antibodies into cells.”

For inspiration to solve this problem, Pentelute and his colleagues turned to nature. Scientists have been working for decades to understand how anthrax toxins get into cells; recently researchers have started exploring the possibility of mimicking this system to deliver small protein molecules as vaccines.

The anthrax toxin has three major components. One is a protein called protective antigen (PA), which binds to receptors called TEM8 and CMG2 that are found on most mammalian cells. Once PA attaches to the cell, it forms a docking site for two anthrax proteins called lethal factor (LF) and edema factor (EF). These proteins are pumped into the cell through a narrow pore and disrupt cellular processes, often resulting in the cell’s death.

However, this system can be made harmless by removing the sections of the LF and EF proteins that are responsible for their toxic activities, leaving behind the sections that allow the proteins to penetrate cells. The MIT team then replaced the toxic regions with antibody mimics, allowing these cargo proteins to catch a ride into cells through the PA channel.

The antibody mimics are based on protein scaffolds that are smaller than antibodies but still maintain structural diversity and can be designed to target different proteins inside a cell. In this study, the researchers successfully targeted several proteins, including Bcr-Abl, which causes chronic myeloid leukemia; cancer cells in which that protein was disrupted underwent programmed cell suicide. The researchers also successfully blocked hRaf-1, a protein that is overactive in many cancers.

“This work represents a prominent advance in the drug-delivery field,” says Jennifer Cochran, an associate professor of bioengineering at Stanford University. “Given the efficient protein delivery Pentelute and colleagues achieved with this technology compared to a traditional cell-penetrating peptide, studies to translate these findings to in vivo disease models will be highly anticipated.”

The MIT team is now testing this approach to treat tumors in mice and is also working on ways to deliver the antibodies to specific types of cells.

Lead authors of the paper are postdoc Xiaoli Liao and graduate student Amy Rabideau. The research was funded by the MIT Reed Fund, the Damon Runyon Cancer Research Foundation, and the National Science Foundation.