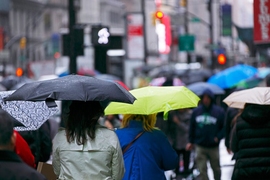 ↓ Download Image
Caption: “The observations are telling us there will be increases [in extreme rainfall] at almost all latitudes, but if you want to know what’s going to happen at the scale of a continent or smaller, it’s a much more difficult question,” Paul O’Gorman says.

Caption:
“The observations are telling us there will be increases [in extreme rainfall] at almost all latitudes, but if you want to know what’s going to happen at the scale of a continent or smaller, it’s a much more difficult question,” Paul O’Gorman says.

A new study by researchers from MIT and the Swiss Federal Institute of Technology in Zurich shows that the most extreme rain events in most regions of the world will increase in intensity by 3 to 15 percent, depending on region, for every degree Celsius that the planet warms.

If global average temperatures rise by 4 degrees Celsius over the next hundred years, as many climate models predict given relatively high CO2 emissions, much of North America and Europe would experience increases in the intensity of extreme rainfall of roughly 25 percent. Some places such as parts of the Asian monsoon region would experience greater increases, while there will be smaller increases in the Mediterranean, South Africa and Australia.

There are a few regions that are projected to experience a decrease in extreme rainfall as the world warms, mostly located over subtropical oceans that lie just outside the tropical, equatorial belt.

The study, published today in Nature Climate Change, finds that the varied changes in extreme precipitation from region to region can be explained by different changes in the strength of local wind patterns: As a region warms due to human-induced emissions of carbon dioxide, winds loft that warm, moisture-laden air up through the atmosphere, where it condenses and rains back down to the surface. But changes in strength of the local winds also influence the intensity of a region’s most extreme rainstorms.

Paul O’Gorman, a co-author on the paper and associate professor of atmospheric science in MIT’s Department of Earth, Atmospheric and Planetary Sciences, says being able to predict the severity of the strongest rain events, on a region-by-region basis, could help local planners prepare for potentially more devastating storms.

“There is interest around the world in the question of whether to adjust codes to adapt to a changing climate and precipitation, particularly for flooding,” O’Gorman says. “We found there are regional variations in the projected precipitation response because of changes in winds, and of course if you’re interested in the impacts of precipitation extremes, you’d want to know what’s happening in your region.”

Since the 1990s, scientists have predicted based on climate models that the intensity of extreme rain events around the world should increase with rising global temperatures. Current observations have so far verified this trend on a broad, global scale. But knowing how extreme storms will change on a more specific, regional scale has been a trickier picture to resolve, as climate data is not equally available in all countries, or even continents, and the signal of climate change is masked by weather noise to a greater extent on the regional scale.

“The observations are telling us there will be increases [in extreme rainfall] at almost all latitudes, but if you want to know what’s going to happen at the scale of a continent or smaller, it’s a much more difficult question,” O’Gorman says.

He and his colleagues began their study by taking a global perspective. They first looked through a massive archive of global simulation runs, known as the Coupled Model Intercomparison Project Phase 5 (CMIP5), which aggregates outputs, or predictions, made by different climate models, for everything from local air pressure to the thickness of sea ice in response to changing climate.

For this study, the researchers culled the CMIP5 archive for specific outputs, including daily accumulated surface precipitation and temperature, vertical wind velocity and pressure, and daily atmospheric humidity. These outputs were simulated by 22 climate models, for the years 1950 to 2100, under a scenario in which there are relatively high emissions of CO2.

The team looked at each of the 22 models’ outputs on a regional, grid-by-grid basis. Each model simulates climate conditions by dividing the globe up into a grid, with each grid cell’s side measuring 100 to 200 kilometers. For each cell in each model, the researchers identified the maximum daily rainfall per year and compared this to the average global temperature for that year.

O’Gorman says that while the spatial pattern of change was robust across the models, the magnitude of the change was much more uncertain in tropical regions, and higher-resolution modeling is needed to narrow down this uncertainty.

To see what was influencing the region-to-region variability in rainfall increases, the team plugged the outputs into a physics-based formula that relates the amount of surface precipitation to the vertical winds and the amount of water vapor in the atmosphere. They found that, overall, it was the changes in winds, and not water vapor, that determined the region-to-region variations in the change in extreme rain intensity.

“It’s kind of striking,” O’Gorman says. “Almost everywhere, there’s an increase in precipitation extremes, except for these ocean regions.”

He suggests this may be partly due to the ongoing expansion of the tropics, and the associated changes to a atmospheric circulation system known as the Hadley cell, in which air rises near the equator and descends farther poleward. As the climate has warmed in past decades, researchers have noted that the climate at the equator has spread towards the poles, creating a much wider tropical belt. As the tropics and the Hadley cell continue to expand, this would affect the pattern of extreme precipitation, especially in the subtropics.

“The subtropics are generally dry, and if you move the region of descending air poleward, you would get some regions with increases, and others with decreases [in extreme rainfall],” O’Gorman says. “However we found that this only explained half of the decreases from changes in winds, so it’s still something of a mystery as to why you get a decrease in precipitation extremes there.”

O’Gorman is currently investigating whether the duration of extreme rainfall events changes with increasing temperatures, which could have practical implications for determining the resilience of buildings and infrastructure.

“Given an extreme precipitation event, how long does it last, say in hours, and does that time change with climate warming?” O’Gorman says. “We think the intensity of an event changes, and if the duration also changes, that could be significant too.”