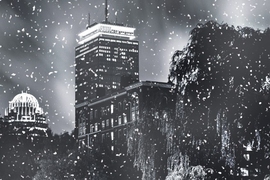 If ever there were a silver lining to global warming, it might be the prospect of milder winters. After all, it stands to reason that a warmer climate would generate less snow.

But a new MIT study suggests that you shouldn’t put your shovels away just yet. While most areas in the Northern Hemisphere will likely experience less snowfall throughout a season, the study concludes that extreme snow events will still occur, even in a future with significant warming. That means that, for example, places like Boston may see less snowy winters overall, punctuated in some years by blizzards that drop a foot or two of snow.

“Many studies have looked at average snowfall over a season in climate models, but there’s less known about these very heavy snowfalls,” says study author Paul O’Gorman, an associate professor in MIT’s Department of Earth, Atmospheric and Planetary Sciences. “In some regions, it is possible for average snowfall to decrease, but the snowfall extremes actually intensify.”

O’Gorman studied daily snowfall across the Northern Hemisphere using 20 different climate models, each of which projected climate change over a 100-year period, given certain levels of greenhouse gas emissions. He looked at both average seasonal snowfall and extreme snowfall events under current climate conditions, and also following projected future warming.

“You might expect with a warmer climate there should be major changes in snowfall in general,” O’Gorman says. “But that seems to be true to a greater extent for average snowfall than for the intensities of the heaviest snowfall events.”

O’Gorman has published the results of his study this week in the journal Nature.

For the most part, researchers have only been able to analyze snowfall on a seasonal scale, estimating a winter’s average snow amounts with climate change. Such analyses, while useful, only paint a broad picture of snowfall’s response to global warming, and may miss specific events, like a large blizzard that may occur over a day or two.

Daily snowfall in a range of climate model simulations has recently been made available through the Coupled Model Intercomparison Project — a growing archive of climate modeling output, including snowfall, that modeling centers and researchers around the world contribute to and analyze.

Over this 100-year period, O’Gorman found that average snowfall decreased substantially in many Northern Hemisphere regions in warm-climate scenarios compared with the milder control climates, but that snowfall amounts in the largest snowstorms did not decrease to the same extent.

From the simulations, O’Gorman found that it takes greater climate warming to reduce the intensity of extreme snowstorms than to reduce average seasonal snowfall. Specifically, a region would experience less seasonal snow if average winter temperatures were initially above minus 14 degrees Celsius (7 degrees Fahrenheit). But the heaviest snowstorms would become less intense only above minus 9 C (16 F).

A sweet spot for extreme snowfall

What’s more, O’Gorman found that there’s a narrow daily temperature range, just below the freezing point, in which extreme snow events tend to occur — a sweet spot that does not change with global warming. This is in contrast to average snow events, which may occur over a broader temperature range.

“People may know the expression, ‘It’s too cold to snow’ — if it’s very cold, there is too little water vapor in the air to support a very heavy snowfall, and if it’s too warm, most of the precipitation will fall as rain,” O’Gorman says. “Snowfall extremes still occur in the same narrow temperature range with climate change, and so they respond differently to climate change compared to rainfall extremes or average snowfall.”

Anthony Broccoli, professor of environmental sciences at Rutgers University, notes that the study’s results may have implications for the public perception of climate change. For example, while people may be tempted to think that a winter with several extreme snowstorms calls global warming into question, that may not be the case.

“We often hear people claim that a big snowstorm is evidence that the climate is not warming, but these results make it clear that such storms do not provide much evidence about a changing climate,” says Broccoli, who did not contribute to the study. “Those of us who live in the Northeast will likely continue to see occasional heavy snowstorms, especially in midwinter when temperatures are at their lowest.”

Professor Paul O’Gorman speaks with Boston Globe reporter Carolyn Johnson about his recent research showing that despite climate change, massive snowstorms could still occur. “In some regions, fairly cold regions, you could have a decrease in the average snowfall in a year, but actually an intensification of the snowfall extremes,” explains O’Gorman.

In an article for Scientific American about a blizzard hitting the East Coast of the Unites States, Andrea Thompson cites an MIT study that found that while overall snowfall may decrease due to climate change, extreme snowstorms will still occur.

Doyle Rice of USA Today writes about the new MIT study showing that despite warming brought about by climate change, extreme snowfall will still occur in the Northern Hemisphere. Researchers found that while “yearly average snowfall declines due to climate change in most regions, it actually increases in regions with very low surface temperatures,” writes Rice.