Credits:
Image: NOAA
For the past 40 years — as far back as satellite records show — the frequency and intensity of tropical cyclones has remained relatively stable: About 90 of these storms spin through the world each year, and over the decades, cyclones’ average intensity and maximum wind speed have also remained consistent.

But according to a report by MIT’s Kerry Emanuel, the coming century may whip up stronger and more frequent storms as the planet warms. Emanuel found that rising greenhouse-gas emissions may contribute to a 10 to 40 percent increase in the frequency of tropical cyclones by the year 2100. These storms may produce 45 percent more power, Emanuel predicts, generating stronger winds, rain and storm surges around the world. This ramped-up storm activity will likely be felt most acutely in the North Pacific, as well as the North Atlantic and the southern Indian Ocean. 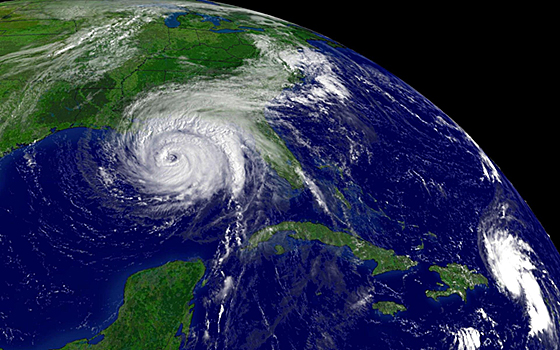 Emanuel, the Cecil and Ida Green Professor of Atmospheric Science in MIT’s Department of Earth, Atmospheric and Planetary Sciences, says that increases of this magnitude might pose significant risks to some coastal locations around the world.

A paper detailing the results is published this week in the Proceedings of the National Academy of Sciences.

More tropical cyclones in the next century

Although the process by which tropical cyclones form is not well understood, scientists generally agree that such storms tend to brew in environments where warm, deep waters underlie cool, humid air. As winds blow across an ocean, warm water evaporates from the surface, heating the overlying atmosphere. As this exchange of thermal energy continues, the warming air begins to whirl, an effect of the Earth’s rotation. As warm air circles toward the center of this convection, it creates a drop in pressure, generating stronger winds. These conditions, if they persist, can spiral into a tropical cyclone.

Attempts to predict tropical cyclone activity in a warming climate have met with mixed success. Climate models adopted by the Intergovernmental Panel on Climate Change (IPCC) are considered the most advanced tools for predicting the global response to rising greenhouse-gas concentrations. But while these models can simulate large-scale weather patterns, their detail is relatively coarse, modeling at a resolution of 100 to 300 kilometers. A tropical cyclone, by contrast, can be as small as 100 kilometers in diameter.

To simulate tropical cyclones at both the global and local scales, Emanuel embedded a high-resolution, local storm model within six global climate models from the IPCC. The local storm model, developed by Emanuel, simulates the development of tropical cyclones, based on regional temperatures and large-scale atmospheric flow, at a resolution that increases as a storm intensifies. One key advantage over other models is the simulation’s ability to resolve a storm’s eyewall — a ring of thunderstorms circling the eye of a storm, where the most severe weather occurs.

For each of the six models, Emanuel simulated 600 storms every year from 1950 to 2005, using weather data from historical records. He also ran the models forward in time, simulating tropical cyclone development through 2100, using an IPCC forecast that today’s carbon dioxide emissions will essentially triple by 2100.

A stormy forecast for the North Pacific

The simulations indicate that the frequency of tropical cyclones will increase by 10 to 40 percent by 2100, given a rise in greenhouse-gas emissions. They predict that this more frequent storm activity will be felt most strongly in the North Pacific, with substantial increases in the North Atlantic and southern Indian Ocean as well.

Emanuel adds that while it seems likely that storms will become more intense in the future, these predictions are far from definitive: Other global and regional models have had mixed results in simulating storm scenarios with global warming.

Kevin Trenberth, a distinguished senior scientist at the National Center for Atmospheric Research, says that while Emanuel’s modeling technique may provide more reliable predictions of the frequency and intensity of future storms, it’s unclear how big these storms will be, or how long they will last. These factors are determined partly by the heating effects of carbon dioxide, and partly by the mixing of ocean layers — which the model, as Trenberth points out, does not consider.

However, he notes, if Emanuel’s predictions are correct, regions such as the South Pacific may also experience more monsoons and El Niño events.

“Having a warmer tropical Pacific, especially in the central Pacific, makes the overall atmosphere more like those in El Niño events,” says Trenberth, who did not contribute to the research. “Places like Hawaii and Tahiti and Fiji would likely be more in jeopardy under these scenarios.”