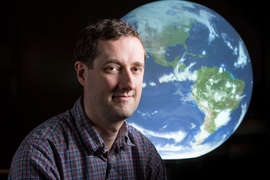 Several winters back, while shoveling out his driveway after a particularly heavy snowstorm, Paul O’Gorman couldn’t help but wonder: How is climate change affecting the Boston region’s biggest snow events?

The question wasn’t an idle one for O’Gorman: For the past decade, he’s been investigating how a warming climate may change the intensity and frequency of the world’s most extreme storms and precipitation events.

In 2014, O’Gorman decided to look into how increased warming may affect daily snowfall around the world. In a Nature study that has since been widely quoted, he reported that while most of the Northern Hemisphere will see less total snowfall in a warmer climate, regions where the average winter temperature is near a “sweet spot” will still experience severe blizzards that dump over a foot of snow in a single day.

As it happened, the following winter in Boston produced consecutive blizzards that covered the city in a record-breaking 110 inches of snow, with much of it falling in a single month.

O’Gorman was on sabbatical in Australia at the time, and missed the towering snowbanks, damaging ice dams, and citywide gridlock. But Boston’s extreme winter has spurred a follow-on project for O’Gorman, who recently was awarded tenure as associate professor in MIT’s Department of Earth, Atmospheric and Planetary Sciences (EAPS).

“While I have previously studied daily snowfall, it would definitely be interesting to study these extreme monthly snowfalls,” O’Gorman says. “They obviously can have a big impact in an urban environment, as we saw in Boston.”

O’Gorman grew up in Tullamore, a small town in the midlands of Ireland that, like the rest of the country, receives frequent rainfall throughout the year, but seldom experiences very heavy rainfall or snowfall.

Extreme precipitation was far from O’Gorman’s focus when he enrolled at Trinity College in Dublin. There, he chose to study theoretical physics, and later fluid dynamics, which gave him the opportunity to work with supercomputers to simulate fluid flow — work that earned him a master’s degree in high-performance computing.

At the time, O’Gorman was interested in applying his work in fluid dynamics to problems related to turbulence generated by aircraft. In 1999, he headed to the United States, where he pursued a PhD in aeronautics at Caltech.

“That was a bit of a jump culturally, for sure,” O’Gorman recalls. “One of the nice things is, Caltech is kind of a small place where, like MIT, there’s a lot of cross-fertilization of ideas.”

In fact, O’Gorman’s interest in atmospheric science grew out of just such an opportunity. As part of his studies in aeronautical engineering, he took an elective on turbulence in the atmosphere and ocean, taught by climate scientist Tapio Schneider.

“[The class] totally changed the course of my career and interests,” O’Gorman says.

“I had been studying turbulence on small scales, and now I was learning about turbulence at the planetary scale. What struck me about the fluid flow of the atmosphere was that there are different layers, as well as the rotation of the planet, clouds, precipitation, and radiation all interacting at the same time, and there were a lot of unanswered questions that, to me, were all pretty fascinating.”

After earning a PhD in aeronautics, O’Gorman switched career paths, and worked with Schneider as a postdoc, investigating turbulence in the atmosphere — and in particular, the atmosphere’s response to global warming. When Schneider was invited to a scientific meeting on extreme events, O’Gorman began a research project that ultimately set his course on the study of extreme precipitation.

In 2008, O’Gorman joined the EAPS faculty as an assistant professor, and has since been exploring the relationship between atmospheric warming and the atmospheric circulation and extreme events.

Part of his research continues the work he did as a postdoc with Schneider, in which the two studied climate change’s effect on water vapor: As the climate warms, there is more water vapor in the atmosphere, which in turn acts to further heat the atmosphere. The effect of water vapor and latent heat release has not yet been fully incorporated in existing theories of the atmosphere. O’Gorman says understanding water vapor’s role could help explain how climate change affects rapidly deepening storms at mid-latitude locations, such as the United States and Europe.

While much of his work is based on theoretical modeling, O’Gorman occasionally works with actual weather observations. In 2013, he looked to data collected by weather balloons around the world to see how the atmosphere’s temperature varies with altitude in recent decades. There exists a temperature gradient in the lowest layer of the atmosphere, in which temperatures get colder with altitude. O’Gorman and his student Martin Singh had predicted that as the climate warms, this gradient will essentially shift upward. However, the theory hadn’t been tested with observations.

O’Gorman and Singh analyzed data from weather balloons around the world, each of which took temperature measurements as it rose up through the atmosphere. They found that, based on the measurements, the atmosphere’s temperature profile did indeed seem to be shifting upward over time, consistent with the theory.

“We found if you look at the temperature profile in the current climate, you can predict what it will do in a warmer climate,” O’Gorman says. “This is one of the factors that affects how much radiation is emitted to space, which affects how much the planet warms.”

In the next few years, he hopes to take advantage of the increasing computing power of climate models to track the intensity of rain and snowstorms in response to influences such as greenhouse gases.

“Computers have gotten powerful enough now that we can do simulations of the whole globe, while resolving clouds to some extent,” O’Gorman says. “We can study how convection organizes itself on all sorts of different scales, all the way up to planetary scales. So I think this is a very exciting moment.”