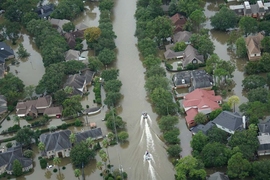 ↓ Download Image
Caption: “You’re rolling the dice every year,” says professor Kerry Emanuel. “And we believe the odds of a flood like Harvey are changing.” Pictured is an aerial view of Houston during the Hurricane Harvey flooding.

Caption:
“You’re rolling the dice every year,” says professor Kerry Emanuel. “And we believe the odds of a flood like Harvey are changing.” Pictured is an aerial view of Houston during the Hurricane Harvey flooding.

As the city of Houston continues to recover and rebuild following the historic flooding unleashed by Hurricane Harvey, the region will also have to prepare for a future in which storms of Harvey’s magnitude are more likely to occur.

A new MIT study, published online this week in the Proceedings of the National Academy of Sciences, reports that as climate change progresses, the city of Houston, and Texas in general, will face an increasing risk of devastating, Harvey-scale rainfall.

According to the study, the state of Texas had a 1 percent chance of experiencing rainfall of Harvey’s magnitude for any given year between 1981 and 2000. By the end of this century, the annual probability of Hurricane Harvey’s record rainfall returning to Texas will rise to 18 percent, if the growth of greenhouse gas emissions to the atmosphere continues unmitigated.

If the risk for such an event during this century increased in a steady, linear fashion, it would mean that there was a 6 percent chance of having Harvey’s magnitude of rainfall in Texas this year.

“You’re rolling the dice every year,” says study author Kerry Emanuel, the Cecil and Ida Green Professor of Atmospheric Science and co-director of the Lorenz Center at MIT. “And we believe the odds of a flood like Harvey are changing.”

When the past isn’t a guide

In the wake of a large disaster, Emanuel says it is natural, and in some cases essential, to ask whether and how soon such an event will occur again.

“Suppose you’re the mayor of Houston, and you’ve just had a terrible disaster that cost you an unbelievable fortune, and you’re going to try over the next few years to put things back in order in your city,” Emanuel says. “Should you be putting in a more advanced storm-sewer system that may cost billions of dollars, or not? The answer to that question depends upon whether you think Harvey was a one-off — very unlikely to happen any time in the next 100 years — or whether it may be more common than you thought.”

Looking at historical records of extreme rainfall will not provide much insight into the future, Emanuel says. That’s because past measurements have been spotty and difficult to extrapolate across larger regions, and the period over which rainfall data have been recorded is relatively short. What’s more, climate change is shifting the odds in terms of the frequency of high-intensity storms around the world.

“If the underlying statistics are changing, the past may not be a good guide to the future,” Emanuel notes in the paper.

Instead, scientists are turning to climate models to try and forecast the future of storms like Harvey. But there, challenges also arise, as models that simulate changing climate at a global scale do so at relatively coarse resolution, of around hundreds of kilometers, while hurricanes require resolutions of a few kilometers.

Emanuel and his colleagues had previously devised a technique to simulate hurricane development in a changing climate, using a specialized computational model they developed that simulates hurricanes at high spatial resolutions. The model is designed so that they can embed it within coarser global climate models — a combination that results in precise simulations of hurricanes in the context of a globally changing climate.

Emanuel used the team’s technique to model past and future hurricane activity for both the city of Houston and the state of Texas. To do so, he first embedded the hurricane model in three gridded climate analyses — simulations of global climate, based on actual data from the past — to simulate hurricane activity near Houston between 1980 and 2016.

He randomly seeded each climate model with hundreds of thousands of “proto-hurricanes,” or early-stage storms, the majority of which naturally peter out and don’t grow to become full-fledged hurricanes. Of the remaining storms, he focused on the 3,700 storms that passed within 300 kilometers of Houston between 1980 and 2016. He then noted the frequency of storms that produced 500 millimeters of rainfall or more — the amount of rain that was initially estimated immediately following Hurricane Harvey.

During this historical period, he calculated that the probability of a Harvey-like storm producing at least 500 millimeters of rain in Houston was around once in 2,000 years. Such an event, he writes, was “‘biblical’ in the sense that it likely occurred around once since the Old Testament was written.”

To get a sense for how this probability, or risk of such a storm, will change in the future, he performed the same analysis, this time embedding the hurricane model within six global climate models, and running each model from the years 2081 to 2100, under a future scenario in which the world’s climate changes as a result of unmitigated growth of greenhouse gas emissions.

While Houston’s yearly risk of experiencing a 500-millimeter rainfall event was around 1 in 2,000 at the end of the last century, Emanuel found the city’s annual odds will increase significantly, to one in 100 by the end of this century.

When he performed the same set of analyses for Texas as a whole, he found that, at the end of the 20th century, the state faced a 1 percent risk each year of experiencing a Harvey-scale storm. By the end of this century, that annual risk will increase to 18 percent. If this increase happens linearly, he calculates that this year, the state’s odds were at about 6 percent — a sixfold increase since the late 20th century.

“When you take a very, very rare, extreme rainfall event like Hurricane Harvey, and you shift the distribution of rain toward heavier amounts because of climate change, you get really big changes in the probability of those rare events,” Emanuel says. “People have to understand that damage is usually caused by extreme events.”

Emanuel hopes that the study’s results will help city planners and government officials to decide where and how to rebuild and fortify infrastructure, as well as whether to recode building standards to stand up to stronger storms and more damaging floods.

“We’re seeing for Texas an event whose annual probability was 1 percent at the end of the last century, and it might be 18 percent by the end of this century,” Emanuel says. “That’s a huge increase in the probability of that event. So people had better plan for that.”

Prof. Kerry Emanuel released a new paper that analyzes the impact of Hurricane Harvey, writes  Bloomberg’s Eric Roston. Emanuel found that “Harvey’s rainfall in Houston was ‘biblical’ in the sense that it likely occurred around once since the Old Testament was written.”

Seth Borenstein of the Associated Press reports on a new study by Prof. Kerry Emanuel, which finds that hurricanes with extreme rainfall could become common as a result of global warming. Borenstein explains that the odds of 20 inches of rain occurring over a large area of Texas is “6 in 100 and by 2081, those odds will be 18 in 100.”

A recent study from Prof. Kerry Emanuel suggests that, due to climate change, “massive hurricanes like Harvey are expected to strike Houston and Texas with much greater frequency in the future than they do now,” writes Deborah Netburn for the Los Angeles Times.

In an article for The Wall Street Journal, Christopher Matthews highlights a new study by Prof. Kerry Emanuel that shows Texas faces an increased risk of devastating rainfall due to climate change. The study demonstrated how greenhouse gas emissions, “help warm offshore waters—a phenomenon that can magnify the severity of storms and generate more rain, creating bigger floods.”

A study by Prof. Kerry Emanuel finds that climate change will triple the likelihood of storms with 20 inches of rainfall hitting Texas, writes Doyle Rice for USA Today. Using computer models of past, present, and future storms, Emanuel “hurried the study to help Houston officials think about what conditions they should consider when they rebuild,” Rice explains.

Chris Mooney at The Washington Post writes about a new study from Prof. Kerry Emanuel, which suggests that the extreme rains during Hurricane Harvey were made more likely by climate change, and “such extreme flooding events will only become more frequent as the globe continues to warm.”

A study by Prof. Kerry Emanuel finds that storms like Hurricane Harvey, which produced 20 inches of rain, are six times more likely to occur as a result of global warming, reports Robinson Meyers of The Atlantic. Rainfall will worsen because “storms of all types—not just hurricanes—will retain more moisture in a warmer climate,” explains Meyers.