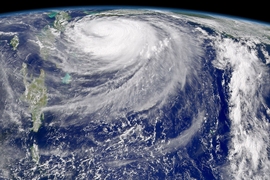 ↓ Download Image
Caption: Hurricane Frances on Sept. 3, 2004. Florida is just barely visible at the top center of the image, while Cuba, Jamaica, and Hispaniola line up vertically along the left.
Credits: Image: SeaWiFS Project, NASA/Goddard Space Flight Center and ORBIMAGE

Caption:
Hurricane Frances on Sept. 3, 2004. Florida is just barely visible at the top center of the image, while Cuba, Jamaica, and Hispaniola line up vertically along the left.
Credits:
Image: SeaWiFS Project, NASA/Goddard Space Flight Center and ORBIMAGE

“Grey swan” cyclones — extremely rare tropical storms that are impossible to anticipate from the historical record alone — will become more frequent in the next century for parts of Florida, Australia, and cities along the Persian Gulf, according to a study published today in the journal Nature Climate Change.

In contrast with events known as “black swans” — wholly unprecedented and unexpected occurrences, such as the 9/11 attacks and the 2008 financial collapse — grey swans may be anticipated by combining physical knowledge with historical data.

In the case of extreme tropical cyclones, grey swans are storms that can whip up devastating storm surges, beyond what can be foreseen from the weather record alone — but which may be anticipated using global simulations, along with historical data.

In the current paper, authors Kerry Emanuel, the Cecil and Ida Green Professor in Earth and Planetary Sciences at MIT, and Ning Lin of Princeton University simulated the risk of grey swan cyclones, and their resulting storm surges, for three vulnerable coastal regions. They found a risk of such storms for regions such as Dubai, United Arab Emirates, where tropical storms have never been recorded. In Tampa, Florida, and Cairns, Australia — places that experience fairly frequent storms — storms of unprecedented magnitude will be more likely in the next century.

“These are all locations where either no one’s anticipated a hurricane at all, such as in the Persian Gulf, or they’re simply not aware of the magnitude of disaster that could occur,” Emanuel says.

To date, the world has yet to see a black swan or grey swan cyclone: Every hurricane that has ever occurred in recorded history could, in retrospect, have been predicted, given the previous pattern of storm activity.

“In the realm of storms, I can’t really think of an example in the last five or six decades that anybody could call a black swan,” Emanuel says. “For example, Hurricane Katrina was anticipated on the timescale of many years. Everybody knew New Orleans was going to get hammered. Katrina was not meteorologically unusual at all.”

However, as global warming is expected to significantly alter the Earth’s atmosphere and oceans in the coming decades, the track and magnitude of hurricanes may skew widely from historical patterns.

To get a sense of the frequency of grey swan cyclones in the next century, Emanuel and Lin employed a technique that Emanuel’s team developed 10 years ago, in which they embed a detailed hurricane model into a global climate model.

For this paper, the team embedded the hurricane model into six separate climate models, each of which is based on environmental data from the past, or projections for the future. For each simulation, they generated, or “seeded,” thousands of randomly distributed nascent storms, and observed which storms produced unprecedented storm surges, given environmental factors such as temperature and location.

From their simulations, the researchers observed that storm surges from grey swan cyclones could reach as high as 6 meters, 5.7 meters, and 4 meters in Tampa, Cairns, and Dubai, respectively in the current climate. By the end of the century, surges of 11 meters and 7 meters could strike Tampa and Dubai, respectively.

To put this in perspective, the last big hurricane to hit Tampa, in 1921, produced a devastating storm surge that measured 3 meters, or about 9 feet high.

“A storm surge of 5 meters is about 17 feet, which would put most of Tampa underwater, even before the sea level rises there,” Emanuel says. “Tampa needs to have a good evacuation plan, and I don’t know if they’re really that aware of the risks they actually face.”

Emanuel says that Dubai, and the rest of the Persian Gulf, has never experienced a hurricane in recorded history. Therefore, any hurricane, of any magnitude, would be an unprecedented event.

“Dubai is a city that’s undergone a really rapid expansion in recent years, and people who have been building it up have been completely unaware that that city might someday have a severe hurricane,” Emanuel says. “Now they may want to think about elevating buildings or houses, or building a seawall to somehow protect them, just in case.”

The team also found that as storms grow more powerful in the coming century, with climate change, the most extreme storms will become more frequent.

The team’s results show that the expected frequency for a grey swan cyclone with a 6-meter storm surge in Tampa would fall from 10,000 years today to as little as 700 years by the end of the century. Put another way, today Tampa has a one in 10,000 chance of being struck by a devastating grey swan cyclone in any given year — odds that will remain the same next week, or next year.

“Hurricanes, unlike earthquakes, are like a roll of the die,” Emanuel says. “Just because you had a big hurricane last year doesn’t make it more or less likely that you’d have a big hurricane next year.”

But in 100 years, Tampa’s odds of a 6-meter storm surge will be 14 times higher, as the world’s climate shifts.

“What that really translates to is, you’re going to see an increased frequency of the most extreme events,” Emanuel says. “Whereas the upper limit of hurricane wind speeds today might be 200 mph, 100 years from now it might be 220 mph. That means you’re going to start seeing hurricanes that you’ve never seen before.”

The group’s estimates of extreme storm intensity, while high, are not unrealistic for the coming century, says Greg Holland, senior scientist at the National Center for Atmospheric Research.

“This is an excellent example of the type of study needed to fill out our knowledge of what is possible with damaging events such as storm surge,” says Holland, who was not involved in the study. “Although the events listed are … rare, a knowledge of their possibility helps considerably with assessing more likely events in planning.”

Writing for The Guardian, Jeff Nesbit highlights Prof. Kerry Emanuel’s research showing that climate change is increasing the risk of extreme storms. Nesbit explains that Emanuel found that the risk for extreme storms in Tampa, Cairns, and the Persian Gulf increased by up to a factor of 14 over time as Earth’s climate changed.

A new study by Prof. Kerry Emanuel found an increased probability of major storms over the coming century, writes Andrea Thompson for Scientific American. “The increase in odds of extreme storms found in the study stems both from a shift toward more intense hurricanes as well as an overall increase in hurricane frequency,” Thompson explains.

According to a new study co-authored by Prof. Kerry Emanual, “cities such as Tampa and Dubai will become increasingly vulnerable to rare, global-warming-fueled superstorms in the future,” writes Doyle Rice for USA Today. The study found that warmer seawaters will increase the probability of major storms.

Prof. Kerry Emanuel's new research indicates that the risk of catastrophic hurricane disasters could increase ten-fold this century due to climate change, writes Eric Holthaus for Slate. Holthaus explains that the researchers embedded a “high-quality hurricane model into a broader scale climate change model” to examine the impact of future extreme storms.

Chris Mooney writes for The Washington Post about how in a new study Prof. Kerry Emanuel used computer models to demonstrate the effects of catastrophic hurricanes on a number of coastal cities. The study is meant “to raise awareness of what a very low probability, very high impact hurricane event might look like,” says Emanuel.

New research by Prof. Kerry Emanuel shows that climate change is increasing the risk of tropical cyclones forming in the Persian Gulf, reports Alister Doyle for Reuters. The study also predicts that the frequency of extreme storms will increase in hurricane-prone areas.

The cost of tropical cyclones