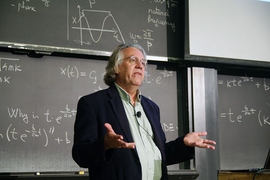 In a detailed talk about the history and the underlying physics of hurricanes and tropical cyclones, MIT Professor Kerry Emanuel yesterday explained why climate change will cause such storms to become much stronger and reach peak intensity further north, heightening their potential impacts on human lives in coming years.

“Climate change, if unimpeded, will greatly increase the probability of extreme events,” such as the three record-breaking hurricanes of recent weeks, he said.

In Houston, Hurricane Harvey, which devastated parts of the Texas coastline and produced more total rainfall than any U.S. hurricane on record, would have been considered a one-in-2,000-years event during the 20th century, according to the best available reconstructions of the past record of such storms, Emanuel said. But in the 21st century, that probability could drop to one in 100 years, given the likely trajectory of climate change conditions. Hurricane Irma, with its record-breaking duration as a Category 5 storm, will go from being a one-in-800-years event in the area of the Caribbean that suffered a direct hit, to a one-in-80-years event by the end of this century, he said.

Emanuel, the Cecil and Ida Green Professor of Atmospheric Science and co-director of the Lorenz Center at MIT, has long been considered one of the leading researchers on tropical storms including hurricanes and cyclones (which is the name for such storms in the Pacific Ocean), the physical mechanisms that generate them, and the reconstruction of their past frequency and intensity. Ron Prinn, the TEPCO Professor of Atmospheric Science and director of the Center for Global Change Science, said in introducing Emanuel’s talk, “I can’t think of a better person in the world to address this issue of hurricanes,” including what he called the “2017 hurricane train” with its succession of huge storms.

In fact, although his talk had been titled “What Do Hurricanes Harvey and Irma Portend?” Emanuel pointed out that now there was “a tragic irony in presenting this lecture just hours after another hurricane [Maria] has devastated Puerto Rico.” At such a time, he said, “it is natural to ask if these are just natural events.” Referring to Environmental Protection Agency Administrator Scott Pruitt’s recent comments that it was inappropriate to talk about climate change in relation to hurricanes Harvey and Irma, Emanuel wondered aloud “if after 9/11 he would have said that now is not a good time to talk about terrorism?”

Already, over the last four decades, he said, hurricanes and cyclones globally have caused an average of $700 billion in damages annually since 1971. Meanwhile, thanks to population growth and the development of oceanfront property, “the global population exposed to hurricanes has tripled since 1970,” he said.

While hurricanes, like earthquakes and volcanoes, “are part of nature,” Emanuel said, “what we’re talking about are unnatural disasters — disasters we cause by building structures” in places that are inherently vulnerable to such devastating forces.

Because of policies, including the current system of federally provided flood insurance that gives private insurers little motivation to study countermeasures, he said, “we’re going to be having Harveys, Irmas, and Marias as far as the eye can see.”

While much of the news coverage of hurricanes focuses on the powerful winds, which have indeed been a major cause of damage and loss of life in the islands pummeled by Irma and Maria, Emanuel said that overall it is water, not wind, that causes the vast majority of damage from such storms, though most people underestimate the severity of the water impact. To illustrate the point, he showed a short, dramatic video of a hurricane-produced storm surge striking a building. “It is hydrodynamically the same thing as a tsunami,” he explained, as the clip showed water rushing steadily in and quickly engulfing an entire house.

“I wish everyone who lives in zones subject to these storms could see films like this,” he said, adding that the scene depicted was clearly not survivable. “Water is the big killer.”

Part of the difficulty in providing strong, clear documentation of the increasing intensity of hurricanes is the sparsity of the historical records. “Prior to 1943, everything we know about hurricanes on the planet comes from anecdotal accounts,” he said, especially those provided by ships’ logs and news accounts in coastal cities. Still, Emanuel and others have devised a variety of ingenious ways of deducing the hurricane record over much longer periods, using techniques such as taking cores from coastal lagoons to reveal periods when storm surges drove quantities of beach sand far inland, and analyzing the annual rates of shipwrecks over a period of centuries.

Meanwhile, the use of new methods, including a technique for deriving wind speed information from the radio signals from GPS navigational satellites, are starting to provide an unprecedented degree of detail of the internal dynamics of these storms, which should enable researchers to continue to refine their models and may ultimately allow for more accurate forecasting of hurricanes. While projecting of hurricane tracks has already improved greatly, he said, the ability to predict the strength of coming storms is not yet as good.

Emanuel said his calculations of the physics behind the formation and growth of hurricanes indicate that the storms’ strength will continue to increase as the climate warms, but that there are inherent limits to that growth. At some point the maximum size of such storms will begin to level off, he said.

But those limits are still far off. For the near term, Emanuel said that U.S. rainfall events as intense as that produced by hurricane Harvey, which had about a 1 percent annual likelihood in the 1990s, has already increased in likelihood to about 6 percent annually, and by 2090 could be about 18 percent.

NBC Mach’s Denise Chow discusses the upcoming hurricane season with Prof. Kerry Emanuel. “The sea level is going up, and it's almost certainly going to continue to go up,” explains Emanuel. “Even if the storms themselves don’t change, the surges are riding on an elevated sea level, and that makes them more dangerous.”