Exploring the tug-of-war over metals during infection 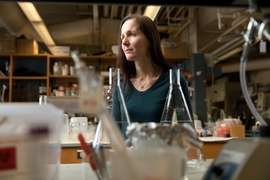 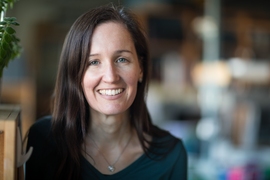 Caption:
“Understanding how our innate immune system works is important for thinking about the development of new ways to treat infectious disease,” says MIT associate professor of chemistry Elizabeth Nolan.

During bacterial infections, microbes and their hosts engage in a tug-of-war over essential metals. Microbes, which need metals such as iron to survive, try to scavenge them from the host, while the host tries to lock them up so microbes can’t get them.

Both sides deploy many proteins and other molecules in this struggle, and by studying these complex interactions, MIT associate professor of chemistry Elizabeth Nolan hopes to glean information that could be useful in helping scientists design new drugs to fight bacterial infections.

“Understanding how our innate immune system works is important for thinking about the development of new ways to treat infectious disease,” says Nolan, who recently earned tenure in MIT’s Department of Chemistry.

Nolan first got interested in the study of metals in biological systems, known as bioinorganic chemistry, when she took an advanced inorganic chemistry course during her junior year at Smith College. She applied to graduate school at MIT and ended up working in the lab of Stephen Lippard, the Arthur Amos Noyes Professor of Chemistry at MIT, who studies the roles of metals in cancer treatment and synaptic transmission.

At that time, Lippard’s lab was beginning to work on designing molecules that could be used as sensors for zinc. These sensors can be used in living cells, and when they encounter their target metal, they light up, allowing the metal’s location to be visualized. Nolan worked on the zinc sensors and later, sensors for mercury.

After doing a postdoctoral fellowship in protein biochemistry and antimicrobial peptide biosynthesis at Harvard Medical School with Professor Christopher T. Walsh, Nolan returned to MIT to start her own lab, where she began a research program focusing on the battle for metals between hosts and microbes.

“We’re interested in mammalian proteins that modulate metal ion availability and also the machinery that microbes use to acquire metals that they need from the host,” she says.

Many bacteria produce molecules called siderophores to help them obtain metals such as iron from their hosts. Once secreted into their environment, siderophores grab onto the metal and then re-enter bacterial cells along with their iron haul.

One area of Nolan’s research focuses on not only unraveling this process, but also exploiting it for possible therapeutic benefit. In one project, researchers in her lab are working on using siderophores to deliver antibiotics. Most antibiotics in clinical use are very broad-spectrum, killing not only harmful microbes but also beneficial species. However, Nolan has shown that when antibiotics are attached to siderophores specific to certain strains of bacteria, they only kill those microbes.

In another recent study, Nolan’s lab and researchers at the University of California at Irvine used modified siderophores from Salmonella to immunize mice against infection with that pathogen, and they are now working on expanding that approach to other microbes.

Nolan also studies proteins that mammals, including humans, use to defend themselves from bacterial infection. One such protein is calprotectin, which scavenges metals so that bacteria can’t grab them, effectively starving the microbes. In 2015, Nolan and her colleagues discovered that calprotectin can sequester iron, depriving microbes of the critical nutrient and strongly inhibiting their growth.

Nolan, who was awarded the 2016 MIT School of Science Teaching Prize for Graduate Education, says some of her favorite things about teaching are sharing her excitement about science and helping her students learn to think critically.

“In my advanced classes something I enjoy doing is drawing examples from the literature — thinking about how we test a hypothesis and asking, what are some of the experiments and data that led to the model we currently have for some complex biochemical system?” she says.

She also tries to stoke her students’ excitement about science, which she says is one of the things she likes best about being at MIT.

“I like the willingness of people to collaborate and be excited about new ideas,” she says. “There’s an open-mindedness in terms of trying something new and high-risk. I enjoy being surrounded by really smart, talented, and creative students and colleagues, and I think that just makes everyone better.”

A new approach against Salmonella and other pathogens