A new approach against Salmonella and other pathogens 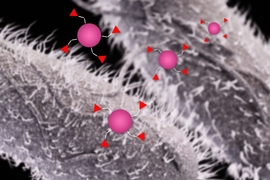 ↓ Download Image
Caption: A new immunization strategy against microbes that invade the gastrointestinal tract may someday offer an alternative to antibiotics.

Researchers from MIT and the University of California at Irvine have developed a new strategy to immunize against microbes that invade the gastrointestinal tract, including Salmonella, which causes more foodborne illness in the United States than any other bacteria.

The researchers targeted a molecule that Salmonella and other bacteria secrete to scavenge iron, which is essential to many cellular functions. Immunization against this molecule led to the production of antibodies that reduced Salmonella growth, and to much lower levels of the bacteria.

This approach could offer an alternative to antibiotics, which can cause side effects because they also kill beneficial bacteria. Using too many antibiotics can also lead to drug resistance.

“We have a huge problem in terms of infectious disease and antibiotic resistance,” says Elizabeth Nolan, an associate professor in MIT’s Department of Chemistry. “One aspect we like about our strategy is that it’s narrow-spectrum, in contrast to many small-molecule antibiotics that are broad-spectrum and can disrupt the commensal [beneficial] microbiota, which can then have secondary negative consequences for the patient.”

Nolan and Manuela Raffatellu, a professor at UC Irvine, are the senior authors of the study, which appears in the Proceedings of the National Academy of Sciences the week of Nov. 7. The paper’s lead authors are Phoom Chairatana, a recent MIT PhD in Chemistry, and Martina Sassone-Corsi, a postdoc at UC Irvine. The team initiated this project in 2011 when Chairatana and Sassone-Corsi were both first-year graduate students.

Most bacteria, as well as some fungi, use molecules known as siderophores to obtain iron, a metal that is critical for cellular processes including metabolism and DNA synthesis. Bacteria that live in the intestinal tract secrete siderophores into the gut and then reabsorb them after they have grabbed onto iron.

There are hundreds of different types of siderophores, and in this study, the researchers focused on a subset of siderophores that are produced by Salmonella and a few other types of pathogenic bacteria that can live in the gut.

The researchers were inspired by the way that some organisms naturally combat microbes by blocking their iron uptake. Humans have a defense protein known as lipocalin 2, which can capture some siderophores and prevent these molecules from carrying iron into bacterial cells. However, lipocalin 2 is not effective against certain types of siderophores, including one type used by Salmonella.

“There’s no identified human defense mechanism against some of these molecules. That’s how we got thinking about how we could boost this metal-withholding response via an immunization,” Nolan says.

The researchers gave mice the immunization twice, two weeks apart, and then infected them with Salmonella 36 to 51 days after the first immunization. They found that antibodies against the siderophores peaked around 21 days after the first immunization and then remained at high levels. The immunized mice also had much smaller numbers of Salmonella in their gut and did not experience the weight loss seen in mice that were infected but not immunized.

In a paper appearing in the same issue of PNAS, researchers at the University of Michigan used a similar approach to generate an immune response against Escherichia coli that can cause urinary tract infections.

The researchers also found that immunization not only reduced the Salmonella population but also led to the expansion of the population of a beneficial bacteria known as Lactobacillus — the probiotic bacteria found in yogurt, which help to inhibit the growth of pathogenic microbes. “We think that the expansion of Lactobacillus may be conferring additional benefit to the host,” Nolan says.

This immunization strategy could be useful to protect people at high risk for certain kinds of infections, such as people who have compromised immune systems or cancer patients receiving chemotherapy, Nolan says.

This approach could also be used to generate antibodies to treat people after they become infected with certain pathogens, such as Salmonella. The researchers are now working to isolate and analyze the antibodies that the mice produced in this study, and they are developing immunization strategies against other types of siderophores found in other organisms.