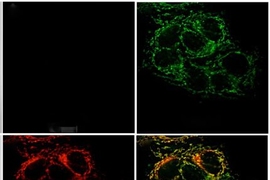 Caption:
Fluorescence microscopy images of live cervical cancer cells pretreated with the sensor: (Top left) minimal fluorescence, reflecting low levels of mobile zinc ions; (top right) a bright green signal appears once zinc ions are taken into the cell; (bottom left) the red fluorescence signal indicating the location of mitochondria; (bottom right) an overlay of the zinc sensor signal and mitochondrial dye shows the zinc sensor accumulating in mitochondria.
Credits:
Image: National Cancer Institute
Zinc, an essential nutrient, is found in every tissue in the body. The vast majority of the metal ion is tightly bound to proteins, helping them to perform biological reactions. Tiny amounts of zinc, however, are only loosely bound, or “mobile,” and thought to be critical for proper function in organs such as the brain, pancreas, and prostate gland. Yet the exact roles the ion plays in biological systems are unknown.

A new optical sensor created at MIT tracks zinc within cells and should help researchers learn more about its functions. The sensor, which can be targeted to a specific organelle within the cell, fluoresces when it binds to zinc, allowing scientists to determine where the metal is concentrated.

The MIT chemists who designed the sensor have already used it to shed light on why zinc levels, normally high in the prostate, drop dramatically in cancerous prostate cells.

“We can use these tools to study zinc trafficking within prostate cells, both healthy and diseased. By doing so we’re trying to gain insight into how zinc levels within the cell change during the progression of prostate cancer,” says Robert Radford, an MIT postdoc who led the project and who is an author of the paper describing the sensors, which appears in the Dec. 9 issue of the Proceedings of the National Academy of Sciences.

Radford works in the lab of Stephen Lippard, the Arthur Amos Noyes Professor of Chemistry, a member of MIT's Koch Institute for Integrative Cancer Research, and senior author of the paper. The paper’s lead author is Wen Chyan, a 2013 MIT graduate.

Researchers in Lippard’s lab are now working on exploiting similar fluorescent sensors to develop a diagnostic test for early detection of prostate cancer, which is the second leading cause of cancer death in American men, but is considered very treatable if caught early enough.

Among its known roles, zinc helps to stabilize protein structure and catalyzes some cellular reactions. In the prostate, zinc is believed to help with reproductive functions by aiding in the accumulation of citrate, a component of semen. Within mitochondria of epithelial prostate cells, zinc has been shown to inhibit the metabolic enzyme aconitase. By blocking the activity of aconitase, zinc truncates the citric acid cycle, the series of reactions that produce ATP, the cells’ major energy currency.

Scientists have theorized that when prostate cells become cancerous, they banish zinc from mitochondria (the cell structures where most ATP production occurs). This allows the cancer cell to produce the extra energy it needs to grow and divide.

“If a cell is dividing uncontrollably and it needs a lot of chemical energy, then it definitely wouldn’t want zinc interfering with aconitase and preventing production of more ATP,” Radford says.

The new MIT study supports this theory by showing that, although cancerous prostate cells can absorb zinc, the metal does not accumulate in the mitochondria, as it does in normal prostate cells.

This finding suggests that, in normal cells, zinc is probably transported into mitochondria by a specialized transport protein, but such a protein has not been identified, Radford says. In cancer cells, this protein might be inactivated.

The new zinc sensor relies on a molecule that Lippard’s lab first developed more than 10 years ago, known as Zinpyr1 (ZP1). ZP1 is based on a dye known as fluorescein, but it is modified to fluoresce only when it binds to zinc.

The ZP1 sensor can simply be added to a dish of cells grown in the lab, where it will diffuse into the cells. Until now, a major drawback of the sensor was the difficulty in targeting specific structures within a cell. “We have had some success using proteins and peptides to target small molecule zinc sensors,” Radford says, “but most of the time the sensors get captured in acidic vesicles within the cell and become inactive.”

Lippard’s team overcame that obstacle by making two changes: First, they installed a zinc-reactive protecting group, which altered the physical properties of the sensor and made it easier to target. Second, they attached an “address tag” that directs ZP1 into mitochondria. This tag, which is a derivative of triphenylphosphonium, is tailored to enter the mitochondria because it is both positively charged and hydrophobic. The resulting sensor readily entered cells and allowed the researchers to visualize pools of mobile zinc within mitochondria.

“This is an exciting new concept for sensing using a combination of reaction- and recognition-based approaches, which has potential applications for diagnostics involving zinc misregulation,” says Christopher Chang, a professor of chemistry and molecular and cell biology at the University of California at Berkeley who was not part of the research team.

In future studies, the researchers plan to expand their strategy to create a palette of sensors that target many other organelles in the cell.

“The identification of intracellular targets for mobile zinc is an important step in understanding its true function in biological signaling. The next steps will involve discovery of the specific biochemical pathways that are affected by zinc binding to receptors in the organelles, such as proteins, and elucidating the structural and attendant functional changes that occur in the process,” Lippard says.

The lab’s immediate interest is study of zinc in the brain, where it is believed to act as a neurotransmitter. By understanding mobile zinc in the auditory cortex, optic nerve, and olfactory bulb, the researchers hope to figure out its role in the senses of hearing, sight, and smell.

The research was funded by the National Institute of General Medical Sciences.