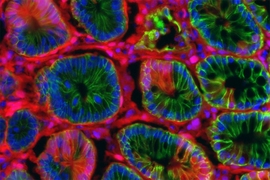 Caption:
MIT researchers created this colon tumor by delivering RNA encapsulated in lipid nanoparticles to the colon. The RNA can activate or delete specific genes, leading to tumor growth.

Using the gene-editing system known as CRISPR, MIT researchers have shown in mice that they can generate colon tumors that very closely resemble human tumors. This advance should help scientists learn more about how the disease progresses and allow them to test new therapies.

Once formed, many of these experimental tumors spread to the liver, just like human colon cancers often do. These metastases are the most common cause of death from colon cancer.

“That’s been a missing piece in the study of colon cancer. There is really no reliable method for recapitulating the metastatic progression from a primary tumor in the colon to the liver,” says Omer Yilmaz, an MIT assistant professor of biology, a member of MIT’s Koch Institute for Integrative Cancer Research, and the lead senior author of the study, which appears in the May 1 issue of Nature Biotechnology.

The study builds on recent work by Tyler Jacks, the director of the Koch Institute, who has also used CRISPR to generate lung and liver tumors in mice.

"CRISPR-based technologies have begun to revolutionize many aspects of cancer research, including building mouse models of the disease with greater speed and greater precision. This study is a good example of both,” says Jacks, who is also an author of the Nature Biotechnology paper.

For many years, cancer biologists have taken two distinct approaches to modeling cancer. One is to grow immortalized human cancer cells known as cancer cell lines in a lab dish. “We’ve learned a lot by studying these two-dimensional cell lines, but they have limitations,” Yilmaz says. “They don’t really reproduce the complex in vivo environment of a tumor.”

Another widely used technique is genetically engineering mice with mutations that predispose them to develop cancer. However, it can take years to breed such mice, especially if they have more than one cancer-linked mutation.

Recently, researchers have begun using CRISPR to generate cancer models. CRISPR, originally discovered by biologists studying the bacterial immune system, consists of a DNA-cutting enzyme called Cas9 and short RNA guide strands that target specific sequences of the genome, telling Cas9 where to make its cuts. Using this process, scientists can make targeted mutations in the genomes of living animals, either deleting genes or inserting new ones.

To induce cancer mutations, the investigators package the genes for Cas9 and the RNA guide strand into viruses called lentiviruses, which are then injected into the target organs of adult mice.

Yilmaz, who studies colon cancer and how it is influenced by genes, diet, and aging, decided to adapt this approach to generate colon tumors in mice. He and members of his lab were already working on a technique for growing miniature tissues known as organoids — three-dimensional growths that, in this case, accurately replicate the structure of the colon.

In the new paper, the researchers used CRISPR to introduce cancer-causing mutations into the organoids and then delivered them via colonoscopy to the colon, where they attached to the lining and formed tumors.

“We were able to transplant these 3-D mini-intestinal tumors into the colon of recipient mice and recapitulate many aspects of human disease,” Yilmaz says.

Once the tumors are established in the mice, the researchers can introduce additional mutations at any time, allowing them to study the influence of each mutation on tumor initiation, progression, and metastasis.

Almost 30 years ago, scientists discovered that colon tumors in humans usually acquire cancerous mutations in a particular order, but they haven’t been able to accurately model this in mice until now.

“In human patients, mutations never occur all at once,” Tammela says. “Mutations are acquired over time as the tumor progresses and becomes more aggressive, more invasive, and more metastatic. Now we can model this in mice.”

To demonstrate that ability, the MIT team delivered organoids with a mutated form of the APC gene, which is the cancer-initiating mutation in 80 percent of colon cancer patients. Once the tumors were established, they introduced a mutated form of KRAS, which is commonly found in colon and many other cancers.

The scientists also delivered components of the CRISPR system directly into the colon wall to quickly model colon cancer by editing the APC gene. They then added CRISPR components to also edit the gene for P53, which is commonly mutated in colon and other cancers.

“These new approaches reduce the time frame to develop genetically engineered mice from two years to just a few months, and involve very basic gene engineering with CRISPR,” Roper says. “We used P53 and KRAS to demonstrate the principle that the CRISPR editing approach and the organoid transplantation approach can be used to very quickly model any possible cancer-associated gene.”

In this study, the researchers also showed that they could grow tumor cells from patients into organoids that could be transplanted into mice. This could give doctors a way to perform “personalized medicine” in which they test various treatment options against a patient’s own tumor cells.

“It allows investigators to have a very flexible model to look at multiple aspects of colorectal cancer, from basic biology of the genes involved in progression and metastasis, to testing potential drugs,” says Camargo, who was not involved in the research.

Yilmaz’ lab is now using these techniques to study how other factors such as metabolism, diet, and aging affect colon cancer development. The researchers are also using this approach to test potential new colon cancer drugs.