Targeting genes by the thousands 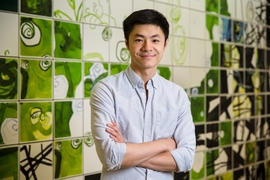 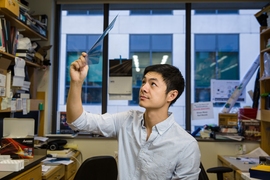 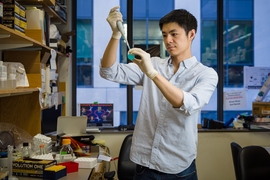 Tim Wang came to MIT six years ago with a simple plan: He wanted to take a genetic approach to studying cancer.

A PhD candidate in biology, Wang was drawn to the Institute partly by the prospect of working with some of the field’s most cutting-edge and revolutionary tools. One such opportunity, perhaps more significant than he could have anticipated upon arriving at MIT, arose with the recent advent of the genome-editing method known as CRISPR. Using this system, Wang has developed a research technique with broad applications for studying a myriad of diseases.

Wang spent most of his childhood in California. After watching his dad work on computers around the house when he was growing up, he decided to pursue an undergraduate degree in computer science at the University of California at Berkeley. However, between his sophomore and junior year of college, Wang’s grandfather was diagnosed with non-Hodgkin’s lymphoma.

“At the time I didn't really even know what that meant or what that was,” says Wang. “I became more interested in learning about cancer, and became more interested in biomedical research in general. What struck me was that the things you do in a lab might have a meaningful impact on people's lives. That the research can lead to a better understanding of disease and more effective treatments.”

Wang shifted his major to bioengineering, which allowed him to combine computational biology, with its focus on analyzing large, genome-wide datasets, and fine-scale, molecular biology. By the end of his undergraduate degree, Wang knew he wanted to continue this type of work in graduate school at MIT.

Wang’s research at MIT — which is co-advised by biology professors David Sabatini, a member of Whitehead Institute for Biomedical Research, and Eric Lander, director of the Broad Institute of MIT and Harvard — was set in motion long before he arrived on campus.

For decades, even before researchers understood the chemical nature of genes, they have been manipulating them in model organisms such as fruit flies and bacteria. More recently, a few years before Wang came to MIT, large-scale research efforts at MIT and elsewhere took aim at human genes using a process called RNA interference. This approach harnesses the molecular machinery that human cells use to turn off genes, and directs it against specific genes of interest. With this approach, the system generally hit the intended gene target, but it also hit many other genes, a major problem with the technology.

When Wang first started at MIT, he began working on an alternative strategy for manipulating human genes that had recently been developed at the Whitehead Institute. The strategy relies on an unusual human leukemia cell line that, for unknown reasons, has roughly half the genetic material of normal human cells  — one copy of every gene instead of two. These cells are much easier and more straightforward to manipulate because inactivating that single gene copy is enough to produce an observable change. However, working with such an odd cell line in research isn’t exactly practical.

“The key limitation of the method was the cell line,” says Wang. “It couldn't be applied to study different types of cancer or to look at different mutations.”

A search for cancer’s Achilles' heel

During Wang’s third year at MIT, a groundbreaking study described a rapid way to edit human genes using the CRISPR system (pronounced “crisper”). The research was led by Feng Zhang, the W. M. Keck Career Development Associate Professor in Biomedical Engineering and a member of the Broad Institute and the McGovern Institute for Brain Research. In bacteria, CRISPR acts as a primitive immune system to provide protection against invading viruses by cutting up their DNA, like a pair of molecular scissors. Zhang and his team quickly realized that this system could be used in human cells as well.

“Compared to previous methods used to edit the genome, CRISPR was so much easier to program,” says Wang. “I immediately thought about how CRISPR could be applied to my research.” Luckily for Wang, Zhang’s lab at the time was just one floor below at the Broad Institute. “So I began chatting with Feng and members of his lab and, together, we began trying to see how we could make it all work,” he says.

Scientists all over the world began using CRISPR to target their favorite genes, one by one. Wang had a different idea. He wanted to use CRISPR to target all of the genes at once, so that he could assess the function of every gene in the entire genome and see which ones were important for the growth of cancer cells. Working in close collaboration with the Zhang lab, Wang set off on a series of experiments to put this idea into practice.

The plan was deceptively simple: Grow millions of cells and use CRISPR to knock out one gene in each cell (gene A in some, gene B in others, and so on). During this process, each cell is marked with a genetic “barcode” that allows Wang to determine which gene has been knocked out. Then Wang grows these barcoded cells in a dish and sees which ones survive and which ones die, telling him which genes are essential for cancer cell growth.

Of course, it’s not quite that straightforward. Most of the essential genes in cancer cells are essential for healthy cells, too. The trick is to compare across a large collection of cancer cell lines and identify genes that are essential only in a specific context (for instance, a specific type of cancer or cancers which have a particular mutation). These context-specific essential genes — or “the Achilles’ heels of cancer” — could serve as targets for new, personalized cancer therapies.

The new technique immediately created quite a buzz, as other research groups began adopting it to study everything from Huntington's disease to aging, a testament to its broad applicability. And the buzz hadn’t been confined to academia.

“After we co-published our papers, it spurred a lot of interest from many pharmaceutical companies,” says Wang. “I think they've engaged us because a lot of what we find is directly relevant to what they're doing. And that's very exciting to me, because they can take our findings to the next step and develop drugs for patients.”

However, Wang himself is intent on staying in academia and hopes to someday become a professor running his own lab.

“I love to work on new ideas and develop new kinds of tools to tackle basic questions,” says Wang.

For the immediate future, Wang has his sights on something else entirely — a postdoctoral research position in neuroscience, an unfamiliar field that will surely challenge him and push him in new ways as he tackles an entirely different set of questions.

“There are many fascinating questions about the brain that are unanswered,” says Wang. “In many cases, even the fundamental organizing principles remain to be discovered. Unlike much of the work with CRISPR and cancer that we're doing now, there's still that foundation to be built in neuroscience, and the prospect of doing that is very appealing to me.”