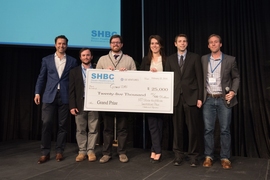 Sepsis is a surprisingly common life-threatening illness in U.S. hospitals, contributing to as many as half of all deaths there, according to a 2014 study by the Journal of the American Medical Association. Around 250,000 Americans die each year from the condition, the Centers for Disease Control and Prevention has reported.

“With our filter set, we now have a way to selectively modulate the immune system [during sepsis],” GoodSIRS teammate Brian McAlvin, an intensive care unit (ICU) physician at Boston Children’s Hospital, said during his winning pitch in the MIT Media Lab.

GoodSIRS was one of eight finalist teams — winnowed down from 60 applicants — to pitch healthcare innovation ideas to a panel of judges and the audience at the competition, which aims to promote innovation and entrepreneurship in the healthcare space. The contest was held as part of the 13th annual MIT Sloan Healthcare and BioInnovations Conference (being held today in the Media Lab) and organized by the student-run MIT Sloan Healthcare Club.

A second-place prize of $4,000 went to NoUV, a team from the Harvard-MIT Health Sciences and Technology program (HST) that is developing tanning beds that don’t use ultraviolet rays. Astraeus Technologies, a team from MIT and Harvard University, earned the $1,000 audience-choice prize for a chip, called the L-Card, that can detect lung cancer through a single breath and display results on an app. Earlier this month, Astraeus won the $10,000 Danny Lewin Grand Prize and the $3,000 Founders.org Audience Choice Prize at the MIT $100K Accelerate contest.

MIT Sloan student Matija Dreze, who co-chaired the conference and contest with classmate Rosanna Lim, said the MIT Sloan Healthcare Club introduced the prize this year to cater to a growing number of health care startups in Cambridge who need support. All teams were required to have at least one MIT or Harvard University student. Although MIT offers numerous business-pitch competitions, Dreze said, health care-based teams historically haven’t won as much as other tech companies. “We thought there was a white space [for health care teams],” he said. “They often shine, but they rarely win.”

In his pitch for GoodSIRS, McAlvin said traditional treatments for sepsis, such as dialysis, may adequately filter the blood, “but those technologies can’t discriminate between harmful and beneficial molecules in the blood.” This is inefficient and can lead to further complications such as kidney failure.

To address that issue, the GoodSIRS team engineered chemical agents called antibody maytansinoid conjugates (AMCs) to modify antibodies to bind to a single cytokine. Their device — which has gone through preclinical trials — is a cartridge containing these AMCs that can be added to existing blood-filtering equipment and modified to attack any cytokine associated with sepsis.

“The patient’s blood is filtered when that patient overexpresses a particular cytokine,” said GoodSIRS teammate Brian Timko, a postdoc in the Langer Lab at MIT and an instructor in anesthesia at Boston Children’s Hospital. “When blood flows through, only that cytokine is removed from the flow. … The AMC is removed when the cytokine returns to basal concentrations.”

AMCs are composed of FDA-approved materials and can clear superfluous cytokines from the blood in less than an hour, Timko said. “Moreover,” he added, “our AMC technology is compatible with equipment that’s already used in every intensive care unit across the country.”

Apart from saving lives, the team said their device could cut the high costs of prolonged ICU stays and expensive therapies associated with sepsis treatment. According to the Agency for Healthcare Research and Quality, sepsis is one of the most expensive conditions treated in U.S. hospitals, costing more than $20 billion in 2011. By making treatments more effective and drastically cutting length of hospital stays, the team estimates they can shave about $3.3 billion off that cost. The other GoodSIRS team member was Anne-Marie Schoonbeek, a first-year Harvard Business School student.

Organizers and the speakers at last night’s contest emphasized that the competition process itself was valuable in learning entrepreneurship. In the weeks leading up to the pitch competition, teams were offered mentorship, networking opportunities, and a one-day workshop on developing business pitches.

Hosting the event was Bill Aulet, managing director of the Martin Trust Center for MIT Entrepreneurship and a veteran organizer for other MIT business-pitch contests, such as the MIT $100K Entrepreneurship Competition.

Aulet said the process of starting a commercial venture and building a team is, in some ways, more valuable than winning. “As you go through this, you’re going to face many challenges,” he said. “If you lose, you went through a great process. How’s your team taking this? What have you learned? That will be infinitely more valuable than $25,000 dollars.”

The guest speaker was Zen Chu, a senior lecturer at the MIT Sloan School of Management, tech entrepreneur, and co-founder of MIT's Hacking Medicine initiative.

Entrepreneurial novice Melis Anahtar, a student in HST and a member of finalist team Day Zero Diagnosis (DZD), learned how to develop a presentation for venture capitalists, for example by adding PowerPoint slides that concisely summarize how their technology differs from the rest.

Although DZD didn’t place, such lessons will be important down the road for growing their business, Anahtar said. “It was very helpful in knowing what people want to hear about: things that I wouldn’t necessarily include in a five-minute pitch, but that are higher in priority than I previously thought,” she said.

DZD is developing a diagnostic tool that makes the detection of bacterial infection in hospitals faster and more cost-effective.

For McAlvin, a first-time entrepreneur but long-time researcher, the contest shifted his focus from technology to customer service and other important startup skills. “This process is remarkably instructive to me to get my head out of the science world and get it into the more practical nuts and bolts of the business world,” he said.