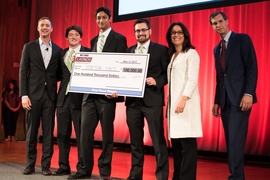 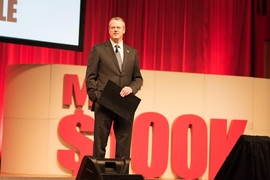 Drones are positioned to change people’s lives, with tech giants building unpiloted aerial vehicles to deliver packages to homes or provide Internet access across the globe.

“We are making drones to feed the world,” team member Forrest Meyen, a PhD student in aeronautics and astronautics, told a capacity crowd gathered in MIT’s Kresge Auditorium.

RaptorMaps, which beat out seven other finalists, is building “crop-mapping” drones that fly across farmland, collecting multispectral images that, when combined with data analytics, pinpoint damaged crops. White blotches or curved streaks in fields, for instance, may signify damage by insects, weeds, or disease; dark, straight lines may signify healthy crops. That data is pushed to the cloud, where farmers can see areas to care for before pests or disease continue to spread.

Each year, about one-third of the 1.4 trillion agricultural plantings globally succumb to some form of damage, Meyen said. Monitoring crops is usually conducted manually, covering only a fraction of a field per day; RaptorMaps’ drones can scan entire fields in that time. The drones, Meyen added, also offer higher resolution than satellite images.

By helping farmers zero in on damage rapidly to, for instance, spray pesticides in specific areas, Meyen said RaptorMaps “reduces the impact on the environment and improves crop yields.”

Meyen told MIT News after the competition that RaptorMaps plans, with the Robert P. Goldberg Grand Prize money, to build out its data-analytics engine and start monitoring fields this summer. “Basically we’re going to use [the money] to take our product to market,” he said.

Over 25 years, the MIT $100K has awarded millions of dollars to more than 160 entrants that have formed companies responsible for over 4,600 jobs and with market values totaling more than $16 billion. Major companies have acquired more than 30 startups launched by the competition.

In honoring the competition’s long history of churning out startups, Baker, in his talk, officially announced May 14 as Entrepreneurship Day in Massachusetts. Noting MIT’s innovation and entrepreneurial ecosystem, Baker added, to thunderous applause, “[MIT] may, in fact, be the single most important institution in the commonwealth of Massachusetts.”

In closing, Baker thanked the competition entrants and the entire MIT community for being “triers and dreamers” that improve the world through practical innovation. “You are, in many respects, what makes this state great,” he said.

Keynote speakers included Robert Langer, the David H. Koch Institute Professor at MIT, who has co-founded more than 20 companies, and Langer’s former student Jason Fuller, a former organizer of the MIT $100K who is now a venture capitalist.

Last night’s eight finalists pitched their business plans to the crowd and a panel of six judges that included tech entrepreneurs, venture capitalists, and industry experts. Each finalist received $15,000, and a few earned additional awards.

RaptorMaps shared last night’s $10,000 Thomson Reuters Data Prize, awarded to a data-centric business, with Quorum, which is building a data-driven webpage with interactive visualizations and constantly updated statistics on politicians’ voting habits and the status of bills, among other things.

Another team, Emerald, which is creating a household device that uses wireless signals to detect when an elderly person falls, took home two awards: the $5,000 AARP Prize, given to teams with technologies that assist the elderly, and the $1,000 Audience Choice Award, determined by a live audience poll.

The other finalists were: CurrencyDoc, which is creating prepaid debit cards that hold multiple currencies and can be used at stores and ATMs globally for a small exchange fee; InvoPlace, whose platform allows small and medium enterprises to gain access to working capital financing by selling invoices to institutional investors; Microswarms, which is inventing swarms of handheld, autonomous underwater robots that can locate underwater mines and find new sources of oil; PanTher Therapeutics, which is developing a treatment to penetrate and release drugs inside inoperable solid tumors; and Suono Bio, which created a device that enables rapid absorption of drugs in the gastrointestinal tract to treat inflammatory bowel disease.

Before last night’s finale, a contest in September asked the nearly 200 teams in this year’s competition to pitch business ideas in 60 seconds. In February, the contestants presented demos they’d built over the winter. These smaller contests — which award a few thousand dollars in prizes — help teams develop business-founding skills, refine their pitches, and connect to a support network that includes mentorship from venture capitalists and seasoned entrepreneurs; media exposure; educational guidance; and networking.

Among other things, this process helped RaptorMaps “set real deadlines” for sorting out legal issues, finding customers, and having a market strategy, Meyen said. But the market research conducted for the competition led to a very important pivot for RaptorMaps, from selling drones to focusing on providing farmers with data. “We learned farmers don’t want to mess around with owning and operating drones,” Meyen said. “The real value is the information that we’re providing.”

Host and former MIT $100K winner Krisztina Holly, the founding executive director of the MIT Deshpande Center for Technological Innovation, praised the competition for offering an “educational journey” for entrepreneurs.

Now a professor at the University of Southern California, Holly won the competition (then the MIT $10K) back in 1991 with her startup Stylus Innovation, which was acquired in 1996. The competition, Holly said, provides fledgling entrepreneurs with the skills, confidence, and network to thrive.

“There may be only one grand prize winner tonight,” she said, “but the $100K inspires and pushes more than 1,000 students every year.”