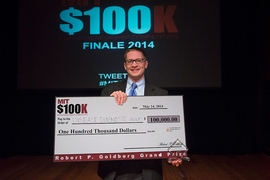 Talk about resourcefulness: An MIT team that has leveraged two novelty items to more rapidly and accurately diagnose one of the world’s most deadly diseases — malaria — captured the grand prize at last night’s MIT $100K Entrepreneurship Competition.

“What if I told you I could save 1 million lives, every year, with just refrigerator magnets and a laser pointer?” John Lewandowski, a PhD student in mechanical engineering, posited during his winning pitch for Disease Diagnostics Group (DDG).

DDG’s device — called “RAM,” for Rapid Assessment of Malaria — uses these magnets to align, and lasers to illuminate, the iron-based crystals left behind by malarial parasites; this approach can determine infection level using a single drop of blood, in one minute, with 94 percent accuracy. This offers drastic improvement over traditional methods, where clinicians manually detect parasites using a microscope, offering results in about an hour with around 50 percent accuracy.

The startup was one of eight finalists that pitched business plans to a near-capacity crowd and panel of judges — including entrepreneurs, venture capitalists, scientists, and industry professionals — in MIT’s Kresge Auditorium. But while only one team walked away with the Robert P. Goldberg Grand Prize, the seven finalists — which each demonstrated a fair share of ingenuity — received additional startup funds totaling $112,000.

Six finalists received $15,000 apiece for winning their respective tracks: life sciences, products and services, mobile, Web/IT, energy, and the Segal Family Foundation’s emerging markets track. A $10,000 Thomson Reuters Data Prize went to an innovative data-centric business, and a $10,000 Creative Arts Prize went to a team with an innovative use of art for enterprise. A $2,000 Audience Choice Award was determined by a live audience poll.

Since the competition’s 1990 founding, 160 entrants have gone on to form companies generating more than 4,600 jobs and earning roughly $1.3 billion in additional funding.

Before last night’s finale, a contest in September asked participants to pitch business ideas in 60 seconds; then, in February, contestants presented demos they’d built over the winter. The contests help teams — a total of 330 originally entered this year’s competition — develop business-founding skills, refine their pitches, and connect to a support network that includes mentorship from venture capitalists and seasoned entrepreneurs; media exposure; educational guidance; and networking.

Last night’s keynote speaker was Max Krohn, co-founder of OKCupid and one of the panel judges.

The handheld RAM device works because malarial parasites consume red blood cells and leave rod-shaped, iron-based crystals called hemozoin in the bloodstream — which then become useful biomarkers for the disease.

To use RAM, people place a drop of blood and water into the device. A magnetic field surrounds the sample, while a low-powered laser light shines through it. If a person is infected — meaning that hemozoin is present in his or her blood — the magnetic field will align the crystals into an orderly pattern, partially blocking the laser.

A sensor captures the light and transmits the results to a small screen with a number score indicating the amount of hemozoin: The less light detected, the greater the infection. It also detects malaria in people who don’t yet show symptoms.

“That score is so important because it eliminates the need for a physician. It tells us what, when, and for how long to prescribe the medication and ties it directly to that patient,” Lewandowski said.

Because it’s a purely mechanical device, with no chemical components, RAM can be delivered to schools and homes for personal use. DDG is now trialing the product in Peru, supported by a $100,000 grant from the U.S. Navy, and may provide as many as 10 million units to nine partner organizations — including malaria foundations, nonprofits, and companies — in 2015. With the MIT $100K prize money, DDG aims to develop 1,000 prototypes.

But last night’s competition was fierce, as the other finalists showcased innovative ideas that, among other things, improved upon medical equipment design, emergency services, and data management.

A team of MIT engineers created the THOR Tourniquet, a closed belt that loops around a limb, with a strap that pulls tight and a tightening crank. As mechanical engineering PhD student Anton Hunt demonstrated on stage, the process can be executed easily, using only one hand, in a matter of seconds. By contrast, traditional tourniquets require straps fed through buckles, which are slower to apply and effective only 75 percent of the time.

The life sciences winner, Agile Devices, developed a microcatheter that has alternating flexible and stiff segments so doctors can more easily feed the tube through the body. This reduces procedure time, which is especially crucial in responding to time-critical emergencies such as strokes or acute arterial bleeding.

The winner of both the Audience Choice Award and the mobile track, RapidSOS, aims to bring mobile technology to our nation’s telephone-based emergency services with a push-button mobile app that connects people instantly with 911. When activated, the app quickly collects and sends the nearest dispatcher personal data, such as location and medical information. In case of public emergencies, it can also pull public camera feeds and send alerts to everyone with a smartphone.

“We live in the 21st century. It’s about time we had a 21st-century solution to this problem,” said Harvard Business School student Michael Martin, a RapidSOS team member.

The winner for Web/IT, Definitive Drone Data (D3), developed a data-management and analytics platform that pulls the massive data collected by commercial drones and plugs it into the cloud.

Unified Solar, which won both top prizes at the Clean Energy Prize competition two weeks ago, was automatically entered into the MIT $100K as the winner of the energy track. Unified Solar’s technology, for the first time, assimilates an entire power-balance circuit onto a low-cost chip that can be integrated into individual solar cells to recapture solar energy blocked by clouds or trees.

Barnacle, a finalist in the mobile category, developed a business model that connects people who want packages shipped with trustworthy drivers who’ll carry the packages in their own cars. Anfirno Water, a finalist in the products and services track, modified a membrane to desalinate salt water by shrinking the membrane’s pores to accept water molecules, and nothing else.

The $10,000 Thomson Reuters Data Prize went to Nodespan, which uses machine learning on customer-support interactions to understand questions asked, and to then allocate them to the person most able to help. The $10,000 Creative Arts Prize went to SoundSpark, a crowdsourcing website that lets users discover independent musicians and co-invest in their record deals.