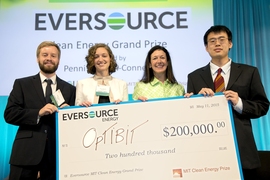 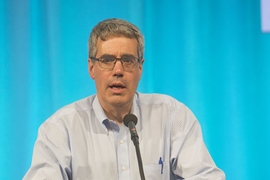 A team that aims to drastically boost the efficiency of computing with silicon chips that move data using light — not electricity — took home both grand prizes at Monday night’s MIT Clean Energy Prize (CEP) competition, earning a total of $275,000.

The team has developed a way to integrate fiber optics — glass or plastic components that can transmit data using light waves — into computer chips, replacing copper wires that rely on electricity.

Using light instead of electricity can drop energy usage by about 95 percent in chip-to-chip communications and increase bandwidth tenfold, team member Alex Wright, a graduate student in the MIT Sloan School of Management, said. Incorporating the technology into massive data centers, run by tech giants like Facebook, she added, could help cut energy usage in these centers by up to 10 percent. “We’re replacing electricity with light and, with it, we’re ushering in a new era of energy efficiency,” Wright said.

The CEP money will fund research and development for Optibit when the team relocates to the Bay Area this summer, Wright told MIT News after the competition. “We’re going to be able to keep … designing new chips, as we go through the fundraising process, which will be really great — we won’t have to lose momentum on the way,” she said.

As the nation’s largest energy-innovation competition for students, the CEP has dished out more than $2.5 million to help launch clean-energy startups since its founding in 2008. Past participants have collectively raised more than $250 million in venture capital and government funding.

This year’s contest kicked off over the weekend, with 21 semifinalists showcasing their ideas to interested parties and judges. That number was winnowed to six finalists, who competed Monday night for a total of $400,000 in three tracks: infrastructure, renewable energy, and energy efficiency.

Four finalist teams were composed entirely of MIT students, with two winning their track prizes for $35,000: Coolflux, which is developing an additive to extract and release heat from insulation to keep rooms cool, won the infrastructure and resource track; and NaviChem, which is making reactors that use microbes to convert solid waste into high-value chemicals, won the renewable energy track. The energy-efficiency prize went to Nextint, a Stanford University team making tinting that tunes the amount of light and heat coming through windows.

Two audience-choice awards went to Safire, an MIT team developing methods to break down and treat biomass to use for renewable energy, and Emreso, a startup developing a method for monitoring gas and fluids through pipelines. For the first time, the contest included a $15,000 development prize for teams operating in emerging markets, which was also awarded to Safire.

In Optibit’s pitch, Wright discussed the benefits of optical chips over their copper-based counterparts.

Data passing through copper wires, for instance, generates small amounts of waste heat, which is an unavoidable loss of efficiency. With individual chips, this is an inconvenience. But it becomes a bigger issue inside data centers — where copper wires run inside and between servers — that drink up energy to keep data stored in the cloud.

To keep its billion users online, for instance, Facebook’s data centers use about 89 megawatt hours per year, equivalent to running the entire city of Palo Alto, Calif., while losing some of that efficiency to waste heat. “The root problem is copper,” Wright said.

For years, Optibit’s two other team members — Chen Sun, a PhD student in electrical engineering and computer science at MIT, and Mark Wade, a PhD student at the University of Colorado — “hacked” traditional software used to design silicon chips.

They built their own software layers that enabled them to design chips that include fiber optics more tightly configured than ever inside a chip’s structure. Those designs are then easily and cost-effectively made by commercial chip manufacturers.

While Optibit’s focus is currently on designing chips and licensing the technology to data centers, Wright said the goal is to bring optical chips to every electronic device, from cellphones to electric cars. “The technology has a huge potential for impact,” she said.

The CEP is open to students from any U.S. university, and aims to promote clean energy innovation and entrepreneurship across the globe. For the competition, all teams are put through multiple rounds of legal and technical mentoring, and rigorous judging.

“A lot of work has gone into getting these teams here today, and they really are some of the brightest minds in the energy space,” Scott Burger, a graduate research assistant at MIT who co-directed this year’s CEP, said in his welcoming remarks. The other co-director was Molly Bales, a student at MIT Sloan.

The mentorship and feedback Optibit received through the CEP, Wright said, was valuable in helping the team refine a business plan and flesh out a go-to-market strategy. “And also just having a deadline was important,” Wright added. “There’s a date when you’ll be pitching your business plan and it needs to be rock solid at that point, or bust.”

Keynote speakers at the competition were Jon B. Wellinghoff, a partner at the Stoel Rives law firm and former chairman of the Federal Energy Regulatory Commission; Jigar Shah, co-founder of Generate Capital and founding CEO of SunEdison, a solar company; and Alex Laskey, president and founder of Opower, which provides software to utilities companies to better monitor energy usage.