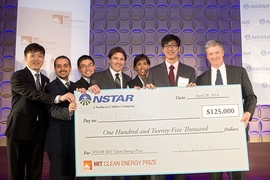 Solar panels on residential rooftops that are partially shaded by clouds or trees sacrifice as much as 30 percent of their energy potential over a year. Unified Solar’s technology, for the first time, integrates an entire power balance circuit onto a low-cost chip that can be integrated into a solar panel to regain that lost energy.

“In the real world, shade happens,” said Bessma Aljarbou, a graduate student at the MIT Sloan School of Management, during Unified Solar’s winning pitch last night to a capacity crowd. “Shade brings energy loss, reliability concerns, and a constrained market. And we have a solution.”

“Compared to our competitors at the panel level, we can recover twice as much energy under partial shading conditions, at a fraction of existing costs,” added Arthur Chang, an MIT PhD student in electrical engineering and computer science (EECS) who invented the technology.

With the prize money, the team — including students from MIT, the California Institute of Technology, and Stanford University — aims to further develop the technology and launch the company. By 2015, the team aims to complete in-lab testing and pilot their technology in outdoor solar systems.

Unified Solar now becomes the finalist in the energy category in the MIT $100K Entrepreneurship Competition, whose winner will be announced May 14.

The CEP, the nation’s leading student-run energy business-plan competition, awarded a total of $320,000 last night to six teams that have developed clean-energy startups and innovations. More than 60 teams entered this year’s contest; 19 semifinalists made it to Monday’s grand finale.

One finalist team was selected in each of three categories — renewable energy (ThermoVolt), energy efficiency (MF Fire), and infrastructure and resources (uLink) — with each receiving $25,000. Four winners of the Audience Choice Awards — including one from MIT — earned $10,000 each.

Since its 2008 founding at MIT, the CEP — co-sponsored by Massachusetts utility NSTAR and the U.S. Department of Energy — has awarded more than $2 million to help launch clean-energy startups. Past participants have gone on to raise more than $250 million in capital, said Thomas Baade-Mathiesen, a graduate student at MIT Sloan and co-managing director of the CEP. “And that’s even counting conservatively,” he said.

Open to students at any U.S. university and now partnered with Cleantech Open, the competition aims to promote clean energy innovation and entrepreneurship across the nation and the globe, said CEP co-founder Bill Aulet, managing director of the Martin Trust Center for MIT Entrepreneurship. “Sustainability is not just a problem for Cambridge,” Aulet said. “It’s a problem for the world.”

Innovation at the cell level

Existing solutions for partially shaded solar panels optimize power at the panel level. But these bulky “boxes” rely on costly energy-storage components, such as capacitors and inductors. Failing to account for the strength or weakness of each individual PV cell, these also only restore roughly half of lost power. But Unified Solar innovates “at the cell level,” Chang said.

The idea is that providing power balance for individual PV cells — instead of for an entire panel — allows for finer tuning of power optimization. “When you’re at the cell level, the improvement in energy capture under partial shading is basically two times better compared to panel level solutions,” Chang said.

By using intrinsic parasitic components, specifically “diffusion capacitances” — unwanted electrical charges between two components — Chang was able to eliminate the need for external energy storage and integrate all other necessary components for power balance onto a single chip that can be manufactured at high volume and low cost.

“We took a bottom-up approach,” Chang told MIT News after the competition. “When you take into account the fundamental device physics, you learn a lot about properties of solar cells that people often ignored as parasitic components. People wanted to get rid of them, but we found a way to leverage them.”

“No one has ever thought of using the solar cell as an energy storage itself, and that’s what we’re effectively doing,” added team member Albert Chan, a graduate student in MIT’s Leaders for Global Operations program.

So far, the team has built a prototype, which was trialed successfully, and earned a best technical presentation award at the 2014 Applied Power Electronics Conference and Exposition, co-sponsored by IEEE and the Power Sources Manufacturers Association.

Taking home the infrastructure and resources prize was another MIT team, uLink, which developed a low-cost power conversion and routing device that plugs into solar panels to power electronic devices, enabling a pay-as-you-go electricity system for people off the grid.

But the true novelty is in its connectivity: The uLink units can be linked to one another, effectively creating a “peer-to-peer” electricity network, Wardah Inam, an EECS PhD student studying power electronics, said during the team’s pitch. “It empowers users to build their own grid, from the ground up,” she said.

The top prize for energy efficiency (and an Audience Choice Award) went to a University of Maryland team, MF Fire, and its Mulciber Stove — a woodstove equipped with sensors and a control system that automates burning. The stove adjusts its intensity to address problems with too little or too much wood, or bad wood or wet wood — and provides real-time feedback.

Winning in renewable energy (and also an Audience Choice Award) was ThermoVolt, which turns solar cells into cogeneration systems. Sun exposure to solar panels produces about 0.5 percent of wasted heat per degree Celsius increase. ThermoVolt’s modified solar cell captures that wasted energy and uses it to heat water for homes.

The two other audience choice awards went to REEcycle, which reclaims rare earth elements from recycled electronics to create other resources, and MIT team BelLEDs Technologies, which is developing smart LED lights that can wirelessly connect to the Internet and change colors to match people’s moods.

“Instead of trying to balance output at the panel level, the students looked to balance at the individual cell level,” writes Sami Grover of The Huffington Post about a team of MIT students who developed an integrated chip to solve the problem caused by shade on solar panels. “The result was both better performance and considerably lower cost.”

Writing for Scientific American, Melissa Lott reports on how a team from MIT has developed an integrated circuit design that doubles the capacity of existing solar arrays.