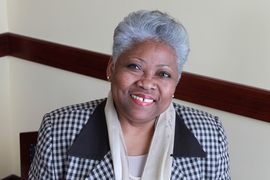 Judy “JJ” Jackson has been named as MIT’s diversity and inclusion officer, as part of the Institute’s ongoing effort to address recent recommendations for making MIT a more welcoming and inclusive place for all members of its community.

The appointment marks a return to MIT for Jackson, who served in multiple roles at the Institute from 1989-2000. Most recently she has been vice president for institutional diversity and associate professor at the University of Kentucky.

“I'm excited to be back in the place where I first experienced a wide-armed embrace of creativity and wholesome support for great ideas,” Jackson says. “I greatly appreciate the thoughtfulness of the recommendations from across the campus and the spirit of community that I have seen expressed here already.”

“I’m delighted to welcome Dr. Jackson back to MIT and look forward to working with her. Her leadership will help advance the recommendations put forward by the community,” says Institute Community and Equity Officer Edmund Bertschinger.

During her time at MIT, Jackson was the associate dean of undergraduate education and student affairs, director of the Office of Minority Education, ombudsperson in the President’s Office, and special advisor to the provost on faculty diversity. After leaving the Institute in 2000, she held appointments in the administrations of Babson College, New York University, and Vassar College, before joining the University of Kentucky in 2008. Jackson also served as an education professor at NYU, Vassar, and the University of Kentucky.

Jackson holds an EdD from Harvard University and an MA from Bucknell University. She has published and presented widely on topics relating to diversity in higher education, and served in leadership positions at many education-related civic and community organizations.

“JJ is coming home to many of us who worked closely with her.  We are delighted that she’s back,” says Vice President Kirk Kolenbrander.

In her new role, beginning this week, Jackson will work closely with a group of the Academic Council, convened by Kolenbrander, as well as a dedicated group of staff, that together have been responding to recommendations put forth by the Black Students’ Union, the Black Graduate Student Association, and many others across campus, to make MIT a more welcoming and inclusive for all. A 2015 report by Bertschinger also laid a groundwork for cultivating a diverse culture of respect and caring. In creating the position of diversity and inclusion Officer, the administration now seeks to move more actively into an implementation stage.

“There’s an excitement in terms of a new resource that we’re applying to this problem. We’ve got such a thoughtful set of recommendations from our students, from Ed Bertschinger, from our alumni. With JJ, we have someone dedicated to helping us make these real,” Kolenbrander says.