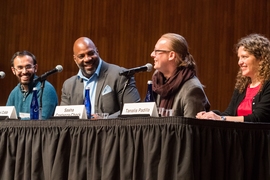 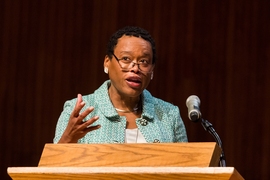 ↓ Download Image
Caption: Melissa Nobles, dean of the School of Humanities, Arts, and Social Sciences, noted in her remarks that many people have been watching the ongoing election with “amazement” due to the charged statements about ethnicity and religion being deployed in the presidential campaign.
Credits: Photo: Justin Knight 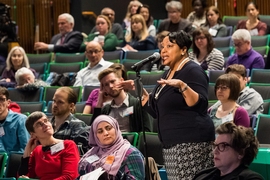 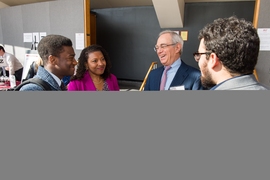 ↓ Download Image
Caption: “This year, in many ways, our students have become our teachers,” MIT President L. Rafael Reif said in his opening remarks at the event.
Credits: Photo: Justin Knight

Caption:
Melissa Nobles, dean of the School of Humanities, Arts, and Social Sciences, noted in her remarks that many people have been watching the ongoing election with “amazement” due to the charged statements about ethnicity and religion being deployed in the presidential campaign.

Caption:
The forum’s afternoon session included workshops and a town hall meeting, which addressed concrete policy changes, among other subjects.

Caption:
“This year, in many ways, our students have become our teachers,” MIT President L. Rafael Reif said in his opening remarks at the event.

Pieces of tangible progress and reminders of ongoing challenges blended together on Friday at the All-MIT Diversity Forum, a day-long Institute conference where participants addressed the many facets of sustaining an inclusive educational community.

“This year, in many ways, our students have become our teachers,” said MIT President L. Rafael Reif, in his opening remarks at the event.

Reif was referring to actions the Institute has taken in recent months, partly prompted by requests made by MIT’s Black Students’ Union (BSU) and its Black Graduate Student Association (BGSA).

Overall, Reif said, MIT aspires to sustain an ethos of “decency, humility, respect, and kindness” on its campus, especially with regard to matters of ethnicity, religious pluralism, gender, sexual orientation, and physical disability.

“I believe that in our best moments, we are that kind of community,” Reif added.

The forum also provided a public platform for speakers to emphasize the many benefits of diversity in institutions of all kinds.

Over 425 members of the MIT community attended the event, which was held in Kresge Auditorium and the Samberg Center.

“A matter of justice”

The forum’s morning session featured a forthright panel discussion, with extensive audience participation, covering topics from campus-specific diversity issues to the politics of resentment that have become a part of the current U.S. election campaign.

Melissa Nobles, dean of the School of Humanities, Arts, and Social Sciences, noted in her remarks that many people have been watching the ongoing election with “amazement” due to the charged statements about ethnicity and religion being deployed in the presidential campaign.

At the same time, plenty of people find it easy to ignore the possibility that discrimination and prejudice may be widespread in society, observed Abubakar Abid, a graduate student in electrical engineering and computer science at MIT.

“There are many people who don’t believe it’s a problem,” said Abid. “I know, because I used to be one of them.”

By his own account, Abid became more sensitized to the presence of prejudicial attitudes by taking MIT’s course 9.75 (Psychology of Gender and Race), which helped him perceive how deeply embedded social attitudes may be.

“Multicultural education is key to solving problems,” said Abid. “It challenges us.”

As such, Abid added, he is now more keenly aware of developments that highlight a lack of tolerance in society — such as the recent episode in which a town in Georgia, near the place where he attended high school, blocked the building of a new mosque.

Ed Bertschinger, professor of physics and the Institute community and equity officer at MIT, added that those who rarely encounter prejudice have a responsibility to be mindful of its existence.

“I’m privileged to belong on campus,” Bertschinger observed. Referring to a recent incident in the news, he said: “I’m privileged to board an airplane speaking a language that the other passengers consider natural to them, and not to be removed from the airplane for speaking my native tongue.” Such events, he noted, “are uncomfortable experiences, and our response to them must not be to ignore them.”

Other panelists attested to the transformative personal effects of becoming involved in efforts to establish social rights and equity.

“Participation in social movements has a profound impact on us as people,” said Sasha Costanza-Chock, an associate professor in MIT’s Comparative Media Studies/Writing program, who has studied social activism extensively — and holds the view that a career in academia does not prevent scholars from actively supporting civic causes.

Tanalis Padilla, a panelist and professor of history at MIT, emphasized that inclusiveness is not just a political stance or civic attitude, but a moral imperative that stems from taking equality seriously. We should “act on diversity not as a mere question of respect for difference, but as a matter of justice,” Padilla said.

Today’s activists, of course, are also striving to sustain the advances made by other advocates, politicians, or family members in decades past, many of whom, as some panelists pointed out, fought for change in seemingly more difficult circumstances.

In the morning panel, Jelani Cobb, the director of Africana Studies, an associate professor of history at the University of Connecticut, and a staff writer at The New Yorker magazine, pointed out that his father had left Georgia for New York City, sight unseen, in hopes of building a better life for himself and his family.

As a result, said Cobb, at times “it makes me feel ashamed if I feel pessimistic” about the possibility of further racial progress in the U.S., no matter how contentious or regressive political debate may appear at any given moment.

Cobb also gave a keynote address at the forum, emphasizing that social progress and political discord often accompany each other in American society, during repeated episodes in which “people are concerned that their country has been infiltrated by people who don’t look like them.” At stake, Cobb emphasized is the question, “Who is included in this idea of ‘We the People?’”

Whatever advances in civil rights have been earned over time, Cobb added, progress is something that has to be guarded and actively preserved.

“Vigilance matters,” Cobb contended, adding: “James Baldwin said that the world is held together by the love of a shockingly few people.”

And while politics and policy in the U.S. have often been justified on the basis of American “exceptionalism” in democratic, economic, or military terms, Cobb suggested the concept should be given another meaning: “I would like to live in a country that is exceptional in confronting its shortcomings.”

The forum’s afternoon session included workshops and a town hall meeting, which addressed concrete policy changes, among other subjects.

MIT Vice President Kirk Kolenbrander has been leading a working group of MIT’s Academic Council, which is implementing a series of BSU and BGSA recommendations to promote diversity and tolerance at the Institute. The student proposals were submitted in December 2015.

As Kolenbrander noted during the town hall meeting, MIT has already budgeted in a 10.4 percent increase in undergraduate financial aid for the 2016-17 academic year, and is in the process of implementing a series of other major student recommendations.

MIT Medical has also expanded its counseling capacity to assist students who are dealing with race-based traumatic stress — a BGSA proposal — and, in response to a BSU recommendation, has hired a psychologist who specializes in issues relating to the African diaspora.

That specialist will be one of two new psychologists starting in the summer of 2016, along with a new internal medicine specialist who has experience directly relevant to the concerns of diverse student populations. In the meantime, psychologist Stephanie Pinder-Amaker, director of the college mental health program at McLean Hospital, has been holding on-campus meetings to address salient issues with members of the community.

The working group is also implementing student recommendations concerning the collection and release of data about ethnicity and MIT. This project will include data about why students of color turn down offers of undergraduate admission to MIT; the addition of new questions about diversity and inclusion, to be added to the MIT Quality of Life and Undergraduate Enrolled Student Survey; the release of data (with appropriate levels of privacy) about those questions; and annual, updated data about undergraduate academic pathways for underrepresented minority students,  including major retentions rates and enrollment statistics by course.

Kolenbrander lauded the student groups for their constructive proposals and ongoing engagement with the MIT administration.

“It’s exactly this kind of example that creates change in our community,” Kolenbrander said.

In further remarks at the town hall, MIT Chancellor Cynthia Barnhart emphasized that the Institute’s leadership group had “worked closely” with the student groups. And Bertschinger noted that the student-administration dialogue had expanded beyond the two initial groups to include other student organizations.

“There are many [additional] groups whose recommendations have been received,” Bertschinger said.

The town hall discussion also included remarks from a group of MIT administrators who have been active leaders in matters of diversity and inclusion on campus, and who outlined continuing challenges and new directions for the Institute to consider in these areas. The panelists were DiOnetta Jones Crayton, associate dean for undergraduate education, and director of the Office of Minority Education; Eboney Hearn, assistant dean, diversity initiatives, in the Office of the Dean for Graduate Education; Abigail Francis, director of LGBTQ services; Deborah Friscino, interim executive director of MIT Medical; and Kathleen Monagle, associate dean, Student Disability Services.

Kolenbrander also announced that Judy “JJ” Jackson will be rejoining MIT as the diversity and inclusion officer, to help accelerate diversity initiatives on campus.

The administration is continuing to work with MIT departments and programs individually to address recommendations of the student groups, which have called for increases in underrepresented minority faculty and students within the next decade, and have asked departments to craft statements affirming their commitment to diversity.

The MIT history faculty, for one, has already released its statement on diversity — which the administration has termed a “compelling” example while acknowledging that collaborating with every department on these matters will be an ongoing process.

“The work continues and needs to advance,” Kolenbrander said.