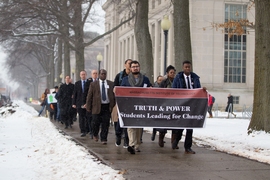 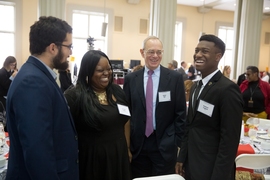 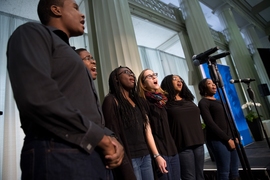 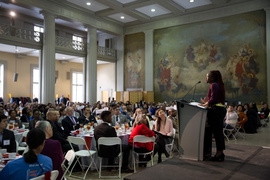 ↓ Download Image
Caption: “We have to be proactive in helping each other to understand,” Itoro Atakpa, a junior in mechanical engineering, said.
Credits: Photo: Bryce Vickmark 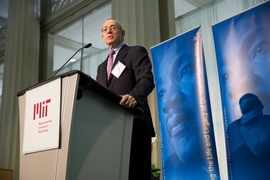 ↓ Download Image
Caption: “I am confident that we are on a path to sustained and meaningful change,” President Reif said.
Credits: Photo: Bryce Vickmark 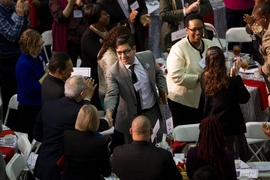 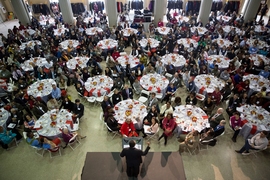 ↓ Download Image
Caption: The keynote speaker, Freeman A. Hrabowski, III, president of University of Maryland, Baltimore County, speaks to the large audience. “I challenge MIT,” he said. “Be the best, not just for STEM but for humankind.”
Credits: Photo: Bryce Vickmark 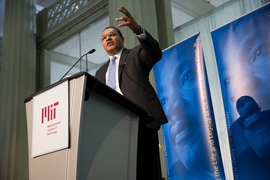 ↓ Download Image
Caption: Hrabowski recalled a time when he was 12, sitting in the back of a church, and he heard an inspirational talk from Dr. Martin Luther King himself. “I was absolutely transformed” by King’s words, Hrabowski said.
Credits: Photo: Bryce Vickmark

Caption:
“We have to be proactive in helping each other to understand,” Itoro Atakpa, a junior in mechanical engineering, said.
Credits:
Photo: Bryce Vickmark

Caption:
“I am confident that we are on a path to sustained and meaningful change,” President Reif said.
Credits:
Photo: Bryce Vickmark

Caption:
The keynote speaker, Freeman A. Hrabowski, III, president of University of Maryland, Baltimore County, speaks to the large audience. “I challenge MIT,” he said. “Be the best, not just for STEM but for humankind.”
Credits:
Photo: Bryce Vickmark

Caption:
Hrabowski recalled a time when he was 12, sitting in the back of a church, and he heard an inspirational talk from Dr. Martin Luther King himself. “I was absolutely transformed” by King’s words, Hrabowski said.
Credits:
Photo: Bryce Vickmark

Reviving a tradition that was dormant for more than two decades, this year’s 42nd annual Martin Luther King Jr. celebration at MIT began with a silent march by several dozen students, faculty, staff, and administrators solemnly making their way from Lobby 7 to the annual luncheon at Walker Memorial Hall.

There, MIT President L. Rafael Reif began his introduction of the speakers by reminding the assembled crowd that here on campus, “this has been quite a year – an extraordinary year. On topics from race, inclusion and social justice, to climate change, this year our students have, in many ways, become our teachers.”

Citing one example of such teaching, Reif recalled a meeting with leaders of two associations of black students, who he said “were thoughtful, creative, persistent, specific, collaborative, constructive, and serious. … They set the tone for mutual respect — and they earned tremendous respect in return.” The groups came with a series of very specific recommendations — and then continued by getting deeply involved in the process of figuring out how to implement those recommendations. They will produce a progress report this spring, he said, which will be made public.

“I am confident that we are on a path to sustained and meaningful change,” Reif said. “As one of our student leaders put it recently, ‘It is wonderful to see the gears of MIT go to work on a problem,’ and I could not agree more.”

Reif said that student leaders “are making a powerful case that a more welcoming, more inclusive MIT would be better for absolutely everyone. They are right! And I look forward to working with them to make this vision real.”

Keynote speaker Freeman Hrabowski has for 24 years been president of the University of Maryland at Baltimore County, which was named by U.S. News and World Report as one of the nation’s most innovative universities. His innovations there, Reif said, included a mentorship program for minority scholars which has resulted in an extraordinary success rate in getting students into advanced degree programs in science, math, and technology — so much so that MIT four years ago adopted its own version of the program.

Bringing about these kinds of profound institutional changes, Hrabowski said, involves the entire university community looking inward at its basic values and saying “all of us must be involved if we are to pull people in who have not been historically represented. … We must hear their voices, we must think about who we are and who we want to become.”

Hrabowski recalled a time when he was 12, sitting in the back of a church, and he heard an inspirational talk from Martin Luther King Jr. himself, which led him to want to take part in demonstrations that he knew might lead to his arrest. His parents, who had urged him to go to the talk, were fearful about the possible consequences of that action, especially spending time in jail at his young age, but they reluctantly allowed him to go. He was indeed arrested and spent five days in jail.

“I was absolutely transformed” by King’s words, Hrabowski said, “because his message was this: That the world of tomorrow could be better than the world of today, and that I, a child, could be part of bringing about that transformation. It wasn’t just about what he would do or what my parents would do.”

Even after his horrible experience in jail, he said, he came out feeling empowered, knowing that even as a child, his actions could be part of making a real difference. Speaking to the students in the audience, he said “you do have the right and the ability to speak truth to power” — the theme of this year’s MLK lunch.

Real change has taken place, he said — the diversity represented there in the room, he said, would have been hard to find in Boston in the 1960s. Voting rights and other important legislation have made a difference, and rates of college graduation for minorities, for example, have increased about tenfold since then. “Every group has gotten better off as a result of that,” he said.

Quoting the poet Guillaume Apollinaire, Hrabowski said “the joy always comes after the struggle.” Anybody who is trying to achieve anything substantive in the world is struggling, he said. “We have to keep working at it. … Nothing takes the place of hard work and attitude.”

Itoro Atakpa, a junior in mechanical engineering, talked about her own experiences as an African-American student at MIT and urged her fellow students to be involved in improving the feeling of inclusiveness for everyone on campus. “We have to be proactive in helping each other to understand. This is the only way to identify and address the resources that are missing here,” she said.

Atakpa said that students should spread the message of inclusiveness like a kind of benign contagion. “I challenge you to infect others with your voice,” she said. “The voices in your head don’t have to be a silent and personal affliction; they should be an epidemic on the grounds of our campus. Because you are the revolutionary, you are the difference. And I know from experience that once someone catches wind of your emotion and listens to your thoughts and ideas, the virus of your voice is chronic and incurable.”

And graduate student Sergio Hiram Cantu said, “we need to help empower others.” Being accepted to MIT, coming from one of the nation’s poorest cities, “felt like winning the lottery,” he said. And when he arrived here, “to my surprise, MIT felt like a family to me.”

But he added that “even though MIT has come a long way, we still have a long way to go” in making everyone feel welcomed, included, and supported. “You have a lot more power than you realize,” he implored. Quoting from Martin Luther King, he said, “if you can’t fly, then run. If you can’t run, then walk. Whatever you do, keep moving forward.”

The luncheon also honored this year's recipients of the annual MLK Jr. Leadership Awards, which are given to students, alumni, staff, groups and faculty who embody the spirit of King’s work, including contributions in academic, research, and religious work that show integrity, leadership, and creativity. This year's award recipients were Ethan Zuckerman, Barbara A. Johnson, Rasheed Auguste, George Chao, La-Tarri M. Canty, and the organizations Fossil Free MIT and MIT Black Graduate Student Union.

“Our judgments are shaped by biases”