“Our judgments are shaped by biases” 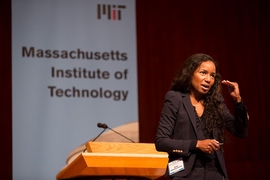 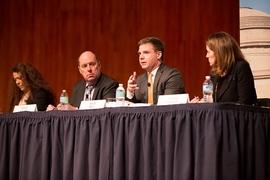 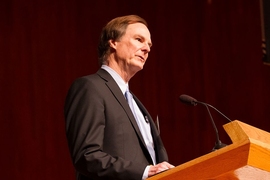 ↓ Download Image
Caption: The Institute Diversity Summit occurred the same day as the release of a report on building inclusiveness at MIT. The report was authored by Edmund Bertschinger, Institute Community and Equity Officer, who spoke at the event.
Credits: Bryce Vickmark 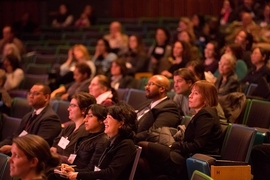 ↓ Download Image
Caption: Members of the audience at the Institute Diversity Summit, which was held in Kresge Auditorium.
Credits: Bryce Vickmark

Caption:
The Institute Diversity Summit occurred the same day as the release of a report on building inclusiveness at MIT. The report was authored by Edmund Bertschinger, Institute Community and Equity Officer, who spoke at the event.
Credits:
Bryce Vickmark

Caption:
Members of the audience at the Institute Diversity Summit, which was held in Kresge Auditorium.
Credits:
Bryce Vickmark

When children ages 3 to 4, of various races, are shown similar dolls, one white and one black, and asked to pick out the one they think is “good,” “smart,” “pretty,” or that “you want to be friends with,” they overwhelmingly pick the white doll. This is true even of African-American children.

“Our judgments are shaped by biases,” Gosline said — and those preconceptions can be remarkably persistent even when they are clearly and demonstrably false. The persistence of these biases makes it difficult to achieve a more fair and inclusive workplace and society, she said, even for well-meaning people who are sincerely trying to do so.

In another example of how biases affect perceptions — one that resonated with the members of the MIT community who gathered at Kresge Auditorium for the summit — Gosline showed examples from her own research, which asked people to evaluate “brain-training” software designed to boost reasoning skills. In the test, people used the exact same software, but for some of them it carried a label identifying it as coming from MIT, while for others it was identified as coming from the University of Phoenix.

And in research that bears more directly on workplace decisions, people asked to evaluate the performance of otherwise identical employees were more likely to describe the person as “bossy” and “selfish” if the name assigned to the employee was “Heidi” rather than “Howard.”

These internalized reactions can have a significant effect on efforts to boost the numbers of women and underrepresented minorities within a school or a company, Gosline said. Even if recruitment efforts succeed in attracting these groups, those people may not stay if they find themselves intimidated in subtle and even unconscious ways.

“You may find a higher attrition rate,” Gosline said. To counter that, “you really need to think about inclusion,” in every aspect of daily behavior and decision-making.

Gosline outlined a series of specific actions and approaches that people can take to try to counter their own biases. These include, for example, “active listening,” in which people try to understand another’s perspective.

The panelists discussed a new report by Edmund Bertschinger, the Institute Community and Equity Officer, released yesterday, which outlines a series of 17 recommendations to help make MIT a more inclusive, fair, and caring place for all members of its community.

“The key, as I observe it, is to genuinely care for each other,” Barnhart said. She added that despite the intensity of life at MIT, people should take even a few minutes to check on those around them who may be having difficulties. “Conversations matter,” Barnhart said. “In addition to caring, you’ve got to be willing to commit the time.”

Ruiz commented on the new report’s call for representatives of all groups in the MIT community to work together on drafting a succinct “MIT Compact,” a clear statement of the Institute’s values and objectives. Such a document would reflect “the core values, and what we expect from each other,” Ruiz said.

Schmidt addressed the question of what may be needed to implement the new report’s many recommendations. “The recommendations are impressive both in scope and depth,” he said. “The challenge now is to gather feedback from the community, so that we make sure everybody’s on board. Time resources are what’s needed. … We need to really make this happen.”