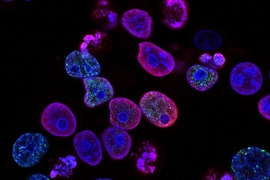 Nanoparticles offer a promising way to deliver cancer drugs in a targeted fashion, helping to kill tumors while sparing healthy tissue. However, most nanoparticles that have been developed so far are limited to carrying only one or two drugs.

MIT chemists have now shown that they can package three or more drugs into a novel type of nanoparticle, allowing them to design custom combination therapies for cancer. In tests in mice, the researchers showed that the particles could successfully deliver three chemotherapy drugs and shrink tumors.

In the same study, which appears in the Sept. 14 issue of the Journal of the American Chemical Society, the researchers also showed that when drugs are delivered by nanoparticles, they don’t necessarily work by the same DNA-damaging mechanism as when delivered in their traditional form.

That is significant because most scientists usually assume that nanoparticle drugs are working the same way as the original drugs, says Jeremiah Johnson, the Firmenich Career Development Associate Professor of Chemistry and the senior author of the paper. Even if the nanoparticle version of the drug still kills cancer cells, it’s important to know the underlying mechanism of action when choosing combination therapies and seeking regulatory approval of new drugs, he says.

“People tend to take it as a given that when you put a drug into a nanoparticle it’s the same drug, just in a nanoparticle,” Johnson says. “Here, in collaboration with Mike Hemann, we conducted detailed characterization using an RNA interference assay that Mike developed to make sure the drug is still hitting the same target in the cell and doing everything that it would if it weren’t in a nanoparticle.”

The new nanoparticle production technique, which Johnson’s lab first reported in 2014, differs from other methods that encapsulate drugs or chemically attach them to a particle. Instead, the MIT team creates particles from building blocks that already contain drug molecules. They can join the building blocks together in a specific structure and precisely control how much of each drug is incorporated.

“We can take any drug, as long as it has a functional group [a group of atoms that allows a molecule to participate in chemical reactions], and we can load it into our particles in exactly the ratio that we want, and have it release under exactly the conditions that we want it to,” Johnson says. “It’s very modular.”

A key advantage is that this approach can be used to deliver drugs that normally can’t be encapsulated by traditional methods.

Using the new particles, the researchers delivered doses of three chemotherapy drugs — cisplatin, doxorubicin, and camptothecin — at concentrations that would be toxic if delivered by injection throughout the body, as chemotherapy drugs usually are. In mice that received this treatment, ovarian tumors shrank and the mice survived much longer than untreated mice, with few side effects.

“Performing combination chemotherapy using these new designer polymer nanoparticles is an exciting new approach to chemotherapeutics, and this polymer platform is particularly promising for its ability to carry a large load of drugs and deliver them in a triggered, controlled manner,” says Todd Emrick, a professor of polymer science and engineering at the University of Massachusetts at Amherst who was not involved in the study.

Using a method developed by Hemann’s lab, the researchers then investigated how their nanoparticle drugs affect cells. The technique measures cancer drugs’ effects on eight genes that are involved in the programmed cell death often triggered by cancer drugs. This allows scientists to classify the drugs based on which clusters of genes they affect.

“Drugs that damage DNA get clustered into DNA damage-inducing agents, and drugs that inhibit topoisomerases cluster together in another region,” Johnson says. “If you have a drug that you don’t know the mechanism of, you can do this test and see if the drug clusters with other drugs whose actions are known. That lets you make a hypothesis about what the unknown drug is doing.”

The researchers found that nanoparticle-delivered camptothecin and doxorubicin worked just as expected. However, cisplatin did not. Cisplatin normally acts by linking adjacent strands of DNA, causing damage that is nearly impossible for the cell to repair. When delivered in nanoparticle form, the researchers found that cisplatin acts more like a different platinum-based drug known as oxaliplatin. This drug also kills cells, but by a different mechanism: It binds to DNA but induces a different pattern of DNA damage.

The researchers hypothesize that after cisplatin is released from the nanoparticle, via a reaction that kicks off a group known as a carboxylate, the carboxylate group then reattaches in a way that makes the drug act more like oxaliplatin. Many other researchers attach cisplatin to nanoparticles the same way, so Johnson suspects this could be a more widespread issue.

His lab is now working on a new version of the cisplatin nanoparticle that operates according to the same mechanism as regular cisplatin. The team is also developing nanoparticles with different combinations of drugs to test against pancreatic and other types of cancers.