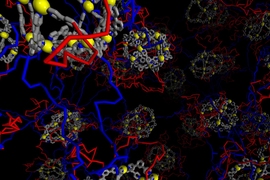 ↓ Download Image
Caption: MIT chemists have created a new type of gel by linking metal organic cages with long polymer strands (blue). The red polymer strands, which loop back to the cages, can be used to further customize the gels by adding other molecules.
Credits: Image courtesy of the researchers.

Caption:
MIT chemists have created a new type of gel by linking metal organic cages with long polymer strands (blue). The red polymer strands, which loop back to the cages, can be used to further customize the gels by adding other molecules.
Credits:
Image courtesy of the researchers.

MIT chemists have created a new material that combines the flexibility of polymer gels with the rigid structure provided by metal-based clusters. The new gels could be well-suited for a range of possible functions, including drug release, gas storage, or water filtration, the researchers say.

These new gels, known as polyMOCs, are a hybrid of two materials called metallogels and metal organic cages. Metallogels, which consist of metals bound to polymer chains, are similar to regular polymer gels in that they are soft and viscoelastic. Metal organic cages (MOCs), on the other hand, have a rigid structure and tend to form crystalline materials.

“One can imagine a class of materials that borrows from both of those, and so has the well-defined, self-assembled structures of the MOCs, but also has the viscoelastic properties of a polymer gel. That’s what we’ve tried to make,” says Jeremiah Johnson, the Roger and Georges Firmenich Assistant Professor of Natural Product Chemistry and the senior author of a paper describing the gels in Nature Chemistry.

The paper’s lead author is Aleksandr Zhukhovitskiy, a graduate student in MIT’s Department of Chemistry.

To create these gels, Johnson and colleagues built on a technique known as metallo-supramolecular assembly. This strategy allows chemists to generate three-dimensional shapes, such as spheres, paddlewheels, or pyramids, by mixing polymers that are attached to molecules called ligands. These ligands are organic compounds that can bind to a metal atom.

In this case, the researchers used a ligand containing two pyridine groups that each can bind to the metal palladium. Each atom of palladium can form bonds with four other ligand molecules, creating a rigid, cage-like structure with 12 palladium centers and 24 ligands. These centers then connect with other metallic cages by flexible polymer linkers, forming a large, self-assembled gel.

While each metal cage can have up to 24 polymer chains attached to it, only four or five of those connect to other metal cages. These extra, unattached chains loop back and attach to their own metal cage. These loops are commonly referred to as “defects,” but the MIT team saw them as an opportunity to enhance the material by replacing some of the ligands on those chains with new functional molecules.

“We can take the ligands that aren’t connected to another cage and swap those out, while keeping the same net number of chains connecting junctions,” Johnson says. “This allows us to make completely different materials in terms of their composition, but they can have the same mechanical properties.”

“By using these clusters of metallic organic cages, they’ve been able to increase the functionality, and this gives the materials very different properties and mechanical behavior,” says Stuart Rowan, a professor of macromolecular science and engineering at Case Western Reserve University who was not involved in the work. “It’s very elegant, fundamental science that opens the door to a whole range of directions.”

In this study, the researchers added a fluorescent molecule called pyrene in place of some of the looped ligands. “When we look at this material under a UV light it’s fluorescent, but mechanically it’s identical to a material without the pyrene ligand. The modulus is the same, the swelling behavior is the same, but now this gel is intensely fluorescent,” Johnson says.

This technique is general enough that the researchers should be able to add many other types of molecules with different functions, Johnson says. Such gels could be used for drug delivery by designing them to store drug molecules within the metal cages. They could also be used for storing gases such as hydrogen, which would be useful in cars that run on fuel cells. By adding ligands that can grab and isolate heavy metals, these gels could also be adapted for water purification.

“You could imagine attaching all kinds of things onto those extra ligands to adapt the material for applications of interest,” Johnson says. “Currently we’re working on making ligands that can not only put something outside of the cage, but also inside the cage, so we could do controlled uptake or release of molecules from the inside of these cages.”

The researchers are also experimenting with creating similar gels with different cage shapes, and developing materials that use metals other than palladium. These metals, including zinc, iron, and titanium, are cheaper and potentially less toxic than palladium.

Prof. Jeremiah Johnson has been named one of STAT's people to watch in Kendall Square in 2016. "The focus in Kendall square tends to be on commercializing discoveries, but Johnson is one of many scientists whose work shows basic research still has a home in the neighborhood," writes reporter Andrew Joseph.