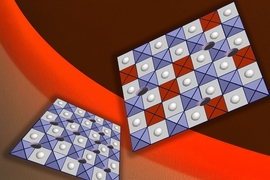 ↓ Download Image
Caption: This diagram depicts the way a new surface treatment can improve the efficiency and longevity of perovskite materials for use in applications such as fuel-cell electrodes. Within the bulk of the material (bottom left) oxygen vacancies shown as “holes” are distributed throughout the material, and cause intense chemical reactivity. But on the surface, many of those vacancies get filled by oxygen when atoms of another element (shown in red) are added to the surface, which significantly slows down the rate of reactions that could degrade the surface and impair its performance.
Credits: Courtesy of Felice Frankel

Caption:
This diagram depicts the way a new surface treatment can improve the efficiency and longevity of perovskite materials for use in applications such as fuel-cell electrodes. Within the bulk of the material (bottom left) oxygen vacancies shown as “holes” are distributed throughout the material, and cause intense chemical reactivity. But on the surface, many of those vacancies get filled by oxygen when atoms of another element (shown in red) are added to the surface, which significantly slows down the rate of reactions that could degrade the surface and impair its performance.
Credits:
Courtesy of Felice Frankel

Researchers at MIT have developed a practical and physically-based way of treating the surface of materials called perovskite oxides, to make them more durable and improve their performance. These materials are promising candidates to serve as electrodes in energy-conversion devices such as fuel cells and electrolyzers. This surface treatment could solve one of the major challenges that has hindered widespread deployment of fuel cell technology that, when operated reversibly, can present a promising alternative to batteries for renewable-energy storage.

The new findings are being reported today in the journal Nature Materials, in a paper by MIT Associate Professor Bilge Yildiz of the departments of Nuclear Science and Engineering and Materials Science and Engineering, former MIT postdoc Nikolai Tsvetkov, graduate students Qiyang Lu and Lixin Sun, and Ethan Crumlin of the Lawrence Berkeley National Laboratory.

Perovskites have become a bustling area of research in recent years, with potential applications in areas ranging from fuel cell electrodes, to nonvolatile memory chips for computers, to solar thermochemical fuel production through the splitting of water and carbon dioxide. They are a broad class of oxide materials, and many teams are exploring variations of perovskite composition in search of the most promising candidates for different uses. But the relative instability of the material’s surface over time has been one of the major limitations to use of perovskites.

The surfaces of these materials, when exposed to water or gases such as oxygen or carbon dioxide at elevated temperatures, as they often are in actual applications, “suffer from degradation because of chemical segregation and phase separation,” Yildiz explains. She says “we, as well as others in the field, have discovered in the past several years that the surfaces of these perovskites get covered up by a strontium-oxide related layer, and this layer is insulating against oxygen reduction and oxygen evolution reactions, which are critical for the performance of fuel cells, electrolyzers, and thermochemical fuel production. This layer on the electrode surface is detrimental to the efficiency and durability of the device, causing the surface reactions to slow down by more than an order of magnitude.”

In earlier work, Yildiz and her team uncovered the reasons behind such detrimental surface segregation of strontium. “We have found it to be governed by enrichment of oxygen vacancies at the surface,” she says. Oxygen vacancies are atomic defects in the lattice where oxygen atoms are missing. “Then the solution was to kill some of those oxygen vacancies.” This idea is contrary to the conventional understanding that oxygen vacancies assist reactions with oxygen molecules at the perovskite oxide surface and improve the rate of oxygen reduction reaction in fuel cells.

So, simply adding a small fraction of more oxidizable elements at the perovskite surface “annihilates some of the oxygen vacancies, makes the surface more oxidized, and prevents the formation of insulating phases that block oxygen exchange reactions at the surface of the material,” Yildiz says. In this way, the surface retains the intrinsically good electronic, ionic, and catalytic properties of the perovskite oxide and enables fast oxygen exchange reactions.

The team’s analysis shows that there is a sweet spot in the addition of more oxidizable elements to the surface, both in terms of the composition and the concentration. In these initial experiments, they tried several different elements to provide the protective effect. The improvement increases up to a certain concentration, and then adding more of the surface additives starts to make things worse again. So for any given material, there will be an optimum amount that should be added, they found. Using hafnium, the new treatment has been shown to reduce the rate of degradation, and increase by 30 times the rate of oxygen exchange reactions at the surface.

The result was quite unexpected, Yildiz says. “Nobody would have planned to use hafnium to improve anything in this field,” she says, as that element or its oxide shows almost no reactivity by itself. But as a surface treatment for the perovskite, it caused the greatest improvement of all the elements tested, “because it provides a good balance between the stability of the surface and the availability of oxygen vacancies,” she explains.

Importantly, Yildiz adds: “We believe the value of the work is not only in having found a potential improvement to fuel cell electrode durability, but also in fundamentally proving the mechanism behind this improvement. For that, our in situ X-ray spectroscopy experiments enabled by the Advanced Light Source have been critical.”

The findings could be quite significant in making perovskite oxide electrocatalysts for some applications, she says, including solid oxide fuel cells. “The bulk electronic and ionic properties of perovskite oxides are really good, as they have been optimized over several decades for use in fuel cells,” she explains, but “the bottleneck now was to improve the oxygen reduction reaction kinetics at the surface,” and many teams have been stymied because the behavior of the material at its surface turned out to be “not nearly as good as hoped,” or as models predicted. Now, the researchers say they have a handle on why the problem occurs, and how to deal with it.

“The observations could be used to produce more robust fuel cells with lower degradation rates, which at the moment is a major target for solid oxide fuel cell developers,” says John Kilner, a professor of energy materials at Imperial College, London, who was not involved in this work.

“In many catalytic materials, stability and performance do not come hand-in-hand — the most active catalysts are also the least stable ones,” says William Chueh, an assistant professor of materials science and engineering at Stanford University, who also was not connected with the research. “In this work, Yildiz and co-workers identified a new way to substantially improve the stability of cobalt-based electrocatalysts simply by adding a small amount of dopants on the surface.”

Chueh adds, “The most promising application of this work is to substantially improve the stability of solid-oxide fuel cells. This is the key issue that controls the cost, and limits the widespread adoption of this technology. The work is excellent in both fundamental insights and technological implications.”

The work received support from the National Science Foundation, Division of Materials Research, Ceramics Program with a CAREER Award, and from the NASA Jet Propulsion Laboratory, and made use of the Advanced Light Source facility at the Lawrence Berkeley National Laboratory, supported by the Department of Energy.

How to make metal alloys that stand up to hydrogen