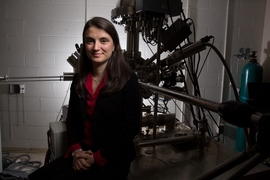 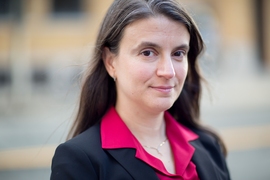 Academics were always important for Bilge Yildiz, the daughter of two math teachers, as she was growing up in and around Izmir, Turkey. Her parents, Yildiz says, were her inspiration for appreciating “the importance of education and hard work.”

But they never wanted to teach her math at home — instead expecting her to go figure out, for herself, whatever she needed to know. This, Yildiz says, was perhaps one of the most important things she learned from her parents — a lesson that has helped her greatly in her career.

There was an early inclination toward engineering as well, she says: “I got involved a lot with my father in exploring things at home, with repairing things — radios, heaters, lighting, photocopiers, building stone and concrete walls. It felt like there was always something being repaired at home. It was interesting, and made me curious about how things work.”

By the time Yildiz was in secondary school, she says, “I had more fun with math and science than with history and geography” — so when it came time to choose a track for high school, as is typical in the Turkish educational system, “I chose the science high school in Izmir. It was clear to me that I would do something related to science or engineering.”

That did prove to be the case: Yildiz this year earned tenure at MIT as an associate professor in the Department of Nuclear Science and Engineering.

Even in high school, Yildiz says, she worked on research at a local university — specifically, a project related to cleaning up the waters in Izmir Bay, on the Aegean Sea. “It was an exciting and engaging experience for me,” she says, “and helped develop my appreciation for the scientific process and for my environment.”

Yildiz says her best childhood memories are of long summers spent along the Aegean coast — so much so that her son, now 2 1/2 years old, is named Ege — “Aegean” in Turkish.

While she was in high school, Yildiz also had her first experience in the U.S., spending a year as an exchange student in a Wisconsin farming town of just a few hundred people. There, for the first time, she was plunged into a curriculum that “was mainly humanities-related classes — literature, history, business, law — and much sports. It was very different than what I was exposed to before.”

Though it was just one year, Yildiz says, she returned to Turkey “focused and refreshed. That year was very important to me, a very different environment, it gave me a different perspective.” She also vividly recalls a trip to the Fermi Laboratory, in neighboring Illinois, during her high-school exchange year — which, she says, made her really look forward to coming back to the U.S. to work in science or engineering.

Later, as an undergraduate at Hacettepe University in Ankara, Turkey, Yildiz became interested in nuclear energy technology. “We had a really excellent curriculum in the department,” she says, “but there was no real career path for it” in Turkey.

So her professors encouraged her to go to MIT, which she did in 1999, earning her PhD in 2003. After a brief postdoctoral stint at MIT, she went on to work as a research scientist at Argonne National Laboratory in Illinois, where she spent three years.

As a postdoc and then at Argonne, Yildiz changed the focus of her research, becoming “deeply interested in electrochemistry and surface science of materials for energy.” Her current research combines experimentation and computational work on material surfaces — a topic, she says, very different from her PhD research, which used artificial intelligence and probabilistic methods to predict failures in nuclear reactors.

Yildiz’s work now focuses on understanding and controlling how surfaces respond to difficult conditions, such as high temperatures, reactive gases, electric fields, and mechanical stresses. Much of her research relates to energy technologies: for example, probing and tuning, in real time, exactly what goes on at the surfaces of electrodes in fuel cells, for producing electricity, and in electrolyzers, for producing clean fuels. “These devices are promising for sustainable energy, but we need to understand better how their surfaces behave, and tailor them for better performance and durability,” she says.

Studying the dynamic response of these material surfaces over long times, she says, makes it possible to learn “what properties we can improve, and then design surfaces that run faster and last longer.” For example, her work has shown that certain mechanical stresses, or dissimilar interfaces, can make electrode reactions faster, improving fuel cell efficiency.

Key to much of Yildiz’s contributions was her development of in situ scanning tunneling spectroscopy, in conjunction with first-principles calculations and novel atomistic simulations, and synchrotron X-ray spectroscopy. “It’s not easy to probe how the atoms at the very surface behave under harsh conditions, and the surface often ends up deviating significantly from the bulk composition,” Yildiz says. “So we cannot rely on only the information from the bulk of the material.”

Yildiz also studies corrosion of surfaces, a costly problem in energy and infrastructure, and one with huge potential to benefit from advances in surface science. An aspect of Yildiz’s research in corrosion is the study of how hydrogen interacts with oxide films that form on metal surfaces. In some applications, such as in nuclear reactors, safety-critical metal structures deteriorate due to hydrogen penetration. “We were able to discover, for the first time, the mechanism for entry of hydrogen through the passive oxide films into the metal, and this led us to identify alloy compositions that could stop the hydrogen entry from the surface,” Yildiz says. “This is useful to keep hydrogen from accelerating the failure of metals.”

Yildiz plans to continue her research on surfaces of materials in electrochemical energy and corrosion, and is also expanding into electrochemistry-based information storage materials. “Uncovering bridges between different disciplines through common scientific fundamentals is something that keeps me really driven about doing research,” she says.

In addition to her research, Yildiz teaches both undergraduate and graduate classes, and is in the process of planning a new class on surface science. “Part of the joy of this job is the teaching, and mentoring the new generation of scientists and engineers,” she says.