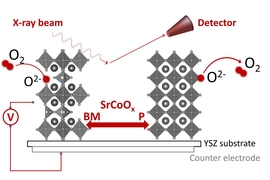 ↓ Download Image
Caption: This diagram shows how an electrical voltage can be used to modify the oxygen concentration, and therefore the phase and structure, of strontium cobaltites. Pumping oxygen in and out transforms the material from the brownmillerite form (left) to the perovskite form (right).

Caption:
This diagram shows how an electrical voltage can be used to modify the oxygen concentration, and therefore the phase and structure, of strontium cobaltites. Pumping oxygen in and out transforms the material from the brownmillerite form (left) to the perovskite form (right).
Credits:
Courtesy of the researchers

Two MIT researchers have developed a thin-film material whose phase and electrical properties can be switched between metallic and semiconducting simply by applying a small voltage. The material then stays in its new configuration until switched back by another voltage. The discovery could pave the way for a new kind of “nonvolatile” computer memory chip that retains information when the power is switched off, and for energy conversion and catalytic applications.

Usually, Yildiz says, the structural phase of a material is controlled by its composition, temperature, and pressure. “Here for the first time,” she says, “we demonstrate that electrical bias can induce a phase transition in the material. And in fact we achieved this by changing the oxygen content in SrCoOx.”

“It has two different structures that depend on how many oxygen atoms per unit cell it contains, and these two structures have quite different properties,” Lu explains.

The two forms have very different chemical, electrical, magnetic, and physical properties, and Lu and Yildiz found that the material can be flipped between the two forms with the application of a very tiny amount of voltage — just 30 millivolts (0.03 volts). And, once changed, the new configuration remains stable until it is flipped back by a second application of voltage.

Strontium cobaltites are just one example of a class of materials known as transition metal oxides, which is considered promising for a variety of applications including electrodes in fuel cells, membranes that allow oxygen to pass through for gas separation, and electronic devices such as memristors — a form of nonvolatile, ultrafast, and energy-efficient memory device. The ability to trigger such a phase change through the use of just a tiny voltage could open up many uses for these materials, the researchers say.

Previous work with strontium cobaltites relied on changes in the oxygen concentration in the surrounding gas atmosphere to control which of the two forms the material would take, but that is inherently a much slower and more difficult process to control, Lu says. “So our idea was, don’t change the atmosphere, just apply a voltage.”

“Voltage modifies the effective oxygen pressure that the material faces,” Yildiz adds. To make that possible, the researchers deposited a very thin film of the material (the brownmillerite phase) onto a substrate, for which they used yttrium-stabilized zirconia.

In that setup, applying a voltage drives oxygen atoms into the material. Applying the opposite voltage has the reverse effect. To observe and demonstrate that the material did indeed go through this phase transition when the voltage was applied, the team used a technique called in-situ X-ray diffraction at MIT’s Center for Materials Science and Engineering.

The basic principle of switching this material between the two phases by altering the gas pressure and temperature in the environment was developed within the last year by scientists at Oak Ridge National Laboratory. “While interesting, this is not a practical means for controlling device properties in use,” says Yildiz. With their current work, the MIT researchers have enabled the control of the phase and electrical properties of this class of materials in a practical way, by applying an electrical charge.

In addition to memory devices, the material could ultimately find applications in fuel cells and electrodes for lithium ion batteries, Lu says.

“Our work has fundamental contributions by introducing electrical bias as a way to control the phase of an active material, and by laying the basic scientific groundwork for such novel energy and information processing devices,” Yildiz adds.

In ongoing research, the team is working to better understand the electronic properties of the material in its different structures, and to extend this approach to other oxides of interest for memory and energy applications, in collaboration with MIT professor Harry Tuller.

José Santiso, the nanomaterials growth division leader at the Catalan Institute of Nanoscience and Nanotechnology in Barcelona, Spain, who was not involved in this research, calls it “a very significant contribution” to the study of this interesting class of materials, and says “it paves the way for the application of these materials both in solid state electrochemical devices for the efficient conversion of energy or oxygen storage, as well as in possible applications in a new kind of memory devices.”