Cracking the code for dormant bacteria 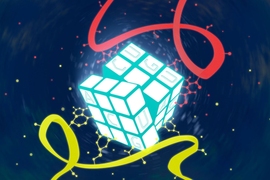 ↓ Download Image
Caption: Four nucleotides, abbreviated A, C, G, and T, spell out DNA sequences that code for all of the proteins cells need. MIT researchers have now discovered another layer of control, mediated by transfer RNA, that helps cells to rapidly divert resources in emergency situations.

Caption:
Four nucleotides, abbreviated A, C, G, and T, spell out DNA sequences that code for all of the proteins cells need. MIT researchers have now discovered another layer of control, mediated by transfer RNA, that helps cells to rapidly divert resources in emergency situations.

The genetic code that allows cells to store the information necessary for life is well-known. Four nucleotides, abbreviated A, C, G, and T, spell out DNA sequences that code for all of the proteins cells need.

MIT researchers have now discovered another layer of control that helps cells to rapidly divert resources in emergency situations. Many bacteria, including strains that cause tuberculosis, use this strategy to enter a dormancy-like state that allows them to survive in hostile environments when deprived of oxygen or nutrients. For tuberculosis, lung infections can last for years, before eventually “re-awakening” and causing disease again.

“What this study does is reveal a system that the bacteria use to shut themselves down and enter one of these persistent states when they get stressed,” says Peter Dedon, the Underwood-Prescott Professor of Biological Engineering at MIT.

Dedon and his colleagues studied a type of bacteria known as Mycobacterium bovis, one of several bacterial strains that can cause tuberculosis in humans. This strain causes a milder version of the disease than the more lethal Mycobacterium tuberculosis and is used in some countries to vaccinate against tuberculosis.

Targeting this newly identified genetic control system could help scientists develop new antibiotics against TB and other diseases, says Dedon, who is the senior author of a paper describing the findings in the Nov. 11 issue of Nature Communications. Yok Hian Chionh, a postdoc at the Singapore-MIT Alliance for Research and Technology (SMART), is the paper’s lead author.

Dedon and colleagues have previously shown that stresses such as radiation or toxic chemicals provoke yeast cells to turn on a system that makes chemical modifications to transfer RNA (tRNA), which diverts the cells’ protein-building machinery away from routine activities to emergency action.

In the new study, the researchers delved into how this switch influences the interactions between tRNA and messenger RNA (mRNA), which carries instructions for protein building from the nucleus to cell structures called ribosomes. The genetic code in mRNA is “read” on the ribosome as a series of three-letter sequences known as codons, each of which calls for a specific amino acid (the building blocks of proteins).

Those amino acids are delivered to the ribosome by tRNA. Like other types of RNA, tRNA consists of a sequence of four main ribonucleosides — A, G, C, and U. (U in RNA substitutes for the T found in DNA.) Each tRNA molecule has an anticodon that matches an mRNA codon, ensuring that the correct amino acid is inserted into the protein sequence. However, many amino acids can be encoded by more than one codon. For example, the amino acid threonine can be encoded by ACU, ACC, ACA, or ACG. In total, the genetic code has 61 codons that correspond to only 20 amino acids.

Once a tRNA molecule is manufactured, it is altered with dozens of different chemical modifications. These modifications are believed to influence how tightly the tRNA anticodon binds to the mRNA codon at the ribosome.

In this study, Dedon and colleagues found that certain tRNA modifications went up dramatically when the bacteria were deprived of oxygen and stopped growing.

One of these modifications was found on the ACG threonine anticodon, so the researchers analyzed the entire genome of Mycobacterium bovis in search of genes that contain high percentages of that ACG codon compared to the other threonine codons. They found that genes with high levels of ACG included a family known as the DosR regulon, which consists of 48 genes that are needed for a cells to stop growing and survive in a dormancy-like state.

When oxygen is lacking, these bacterial cells begin churning out large quantities of the DosR regulon proteins, while production of proteins from genes containing one of the other codons for threonine drops. The DosR regulon proteins guide the cell into a dormancy-like state by shutting down cell metabolism and halting cell division.

“The authors present an impressive example of the new, emerging deep biology of transfer RNAs, which translate the genetic code in all living organisms to create proteins,” says Paul Schimmel, a professor of cell and molecular biology at the Scripps Research Institute, who was not involved in the research. “This long-known function was viewed in a simple, straightforward way for decades. They present a powerful, comprehensive analysis to show there are layers and layers, ever deeper, to this function of translation.”

The researchers also showed that when they swapped different threonine codons into the genomic locations where ACG is usually found, the bacterial cells failed to enter a dormant state when oxygen levels were diminished. Because making this tRNA modification switch is critical to bacterial cells’ ability to respond to stress, the enzymes responsible for this switch could make good targets for new antibiotics, Dedon says.

Dedon suspects that other families of genes, such as those required to respond to starvation or to develop drug resistance, may be regulated in a similar way by other tRNA modifications.

“It is really an alternative genetic code, in which any gene family that is required to change a cell phenotype is enriched with specific codons” that correspond to specific modified tRNAs, he says.

The researchers have also seen this phenomenon in other species, including the parasite that causes malaria, and they are now studying it in humans.

Straits Times reporter Nadia Chevroulet writes that researchers from MIT and the Singapore-MIT Alliance for Research and Technology (SMART) have uncovered how certain bacteria evade the body’s defenses. The findings could provide “new ways to counter tuberculosis, and possibly a new generation of drugs to battle antibiotic resistance.”

The code for survival