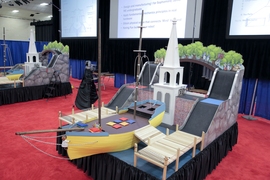 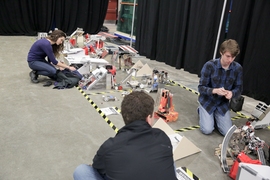 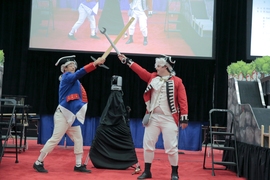 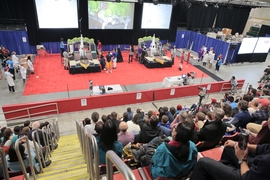 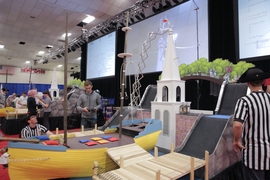 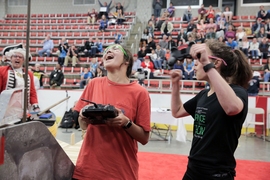 ↓ Download Image
Caption: “The really cool thing about this class is, they’re all starting from raw materials, from scratch,” instructor Sangbae Kim says. “And they always come up with something we never expected.” Pictured, participants rejoice as their robot accomplishes a task.
Credits: Photo: Tony Pulsone 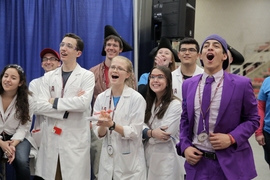 Caption:
In head-to-head battles, robots sought to outscore their opponent by completing various tasks on the course, including hanging small lanterns on the North Church steeple, pushing bags of tea off a wooden ship, scaling a steep hill to simulate Paul Revere’s ride, and hiding cannonballs under the Old North Bridge.

Caption:
“The really cool thing about this class is, they’re all starting from raw materials, from scratch,” instructor Sangbae Kim says. “And they always come up with something we never expected.” Pictured, participants rejoice as their robot accomplishes a task.

Caption:
A group of mentors cheer on the class.

On Thursday evening, just before nightfall, a revolution was afoot at MIT. The battleground was set, the munitions were stocked, the targets were marked, and the soldiers were … robots.

As hundreds of spectators crowded into Johnson Athletic Center, 32 student-built robots, winnowed down from a field of 153, squared off in the annual competition for Course 2.007 (Design and Manufacturing), MIT’s popular undergraduate course in mechanical engineering.

In head-to-head battles, robots sought to outscore their opponent by completing various tasks on the course, such as hanging small lanterns on the North Church steeple, pushing bags of tea off the wooden ship, scaling a steep hill to simulate Paul Revere’s ride, and hiding cannonballs under the Old North Bridge.

To accomplish these tasks, students designed their robots to deploy some ingenious and often complex mechanisms. A remote-controlled robot, for example, was designed to telescope several feet up in the air to place a flag on the church steeple. Other students relied on a strategy of aggression; one robot was programmed to autonomously drive over the bridge and block its opponent’s access — a confrontational strategy that worked, at least through the semifinals, as the robot received both cheers and jeers from the MIT crowd.

In the end, a simple, persistent, and powerful design won the day. Sophomore Austin Brown took home bragging rights, along with a laser-cut trophy of the MIT dome, for his autonomous robot, designed to launch from a custom-designed platform onto a rail bordering the Paul Revere hill. Two small motors powered the robot, racking up points each time it successfully scaled the hill. In the competition’s final round, the bot climbed the 60-degree slope every 1.5 seconds — a blistering rate that ultimately won the contest.

“My motors are smoky,” Brown proudly reported to the crowd. “I smell like a campfire.”

At the start of the night, the competition kicked off with a playful skirmish: Course instructor Amos Winter, assistant professor of mechanical engineering, dressed as a British redcoat and ringing a bell, called to the MIT crowd: “I’ve come to collect innovations, and I want no fabrication! Fabrication is a waste of time and a waste of money.”

In response, co-instructor Sangbae Kim, the Edgerton Career Development Assistant Professor of Mechanical Engineering, dressed as a Revolutionary soldier and brandishing a wrench, called out for a “design revolution.”

“There’s no way we can have innovation without fabrication,” Kim declared, as he chased and ultimately enlisted Winter to his side.

Indeed, 2.007 students spent all semester learning, then applying fabrication techniques to build their robots. At the beginning of the course, each student was given a kit containing materials such as pieces of plastic, metal, and wood, along with wheels, a small Arduino circuit board, and different types of motors with various levels of torque.

“The really cool thing about this class is, they’re all starting from raw materials, from scratch,” Kim says. “And they always come up with something we never expected.”

For instance, many students chose to design their robots to repeatedly scale the Paul Revere hill. Instead of directly tackling the very steep slope, they deployed their own ramps with much lower slopes. As sophomore Emily Young maneuvered her robot up its own ramp — a design that would eventually win her third place — Winter, giving a play-by-play, remarked, “She who makes her own road, makes her own success.”

Sophomore Andrea Gonzalez took a different tack, first tipping her robot against the hill, then launching it up with an Inspector Gadget-like scissor mechanism.

“I love 2.007 so much,” Gonzales said in a video played to the crowd. “I spend all my free time in the lab … trying new concepts, seeing them fail, seeing them succeed, and trying again.”

While most robots were focused on the tasks at hand, several were designed with a more confrontational strategy. Sophomore Will Harvey’s robot reached the quarterfinals with a forklift mechanism designed with multiple degrees of freedom to toss a cannonball under the Old North Bridge — or, as was the case, to flip an opponent’s robot onto its back. Of the 2.007 experience, Harvey said: “There’s a lot of guidance available to you, and it’s up to you to use it. That freedom is really cool.”

Sophomore Ty Ingram muscled his way to the semifinals with a two-robot team, which he aptly named “Wrathful Roombas.” As he remotely drove one robot up and down a custom-built ramp, a second robot, decorated with a pirate flag, drove autonomously across the Old North Bridge and blocked its opponent from accessing a stack of cannonballs. Despite a clever design, Ingram’s pirate bot was ultimately outmatched by Brown’s persistent and powerful climber, in a dramatic contest that drew whoops from the crowd.

In the final round, sophomore Jasmine Lennert challenged Brown’s robot with a design that first autonomously deployed her robot up a custom ramp, after which Lennert carefully drove the robot to pick up cannonballs and drop them down small holes in the Old North Bridge.

While Lennert’s driving skill helped her drop all of the balls in the holes, earning her 357 points, it was not enough to topple Brown, whose speedy hill-scaling robot earned him 1,178 points — and a victory march on the shoulders of Winter and Kim.

Tulle-like DefeXtiles can be 3D printed with no custom software or hardware.

Stressed on the job? An AI teammate may know how to help

Researchers are working toward intelligent machines that can sense cognitive fatigue and suggest interventions to help a human improve performance.

Award cites major contributions to statistical analysis of brain activity and advancing the neuroscience of anesthesia.

Autonomous boats could be your next ride

Five years in the making, MIT’s autonomous floating vessels get a size upgrade and learn a new way to communicate aboard the waters.