Caption:
An excited crowd cheers for students in 2.70 (the precursor of 2.007) as they compete in the final competition in 1979.
Credits:
Photo courtesy of the MIT Museum.

It's hard to ignore the fact that a worldwide maker movement is well underway. Over the past 10 or so years, community Maker Faires have become all the rage; fabrication shops have popped up around the world for both professionals and hobbyists; and websites, tools, and toys catering to do-it-yourselfers are on the rise.

It’s easy to appreciate how a love for making became wildly popular again, especially as STEAM (science, technology, engineering, art, and math) is increasingly and passionately promoted and embraced around the world.

Of course, at MIT — particularly in the Department of Mechanical Engineering (MechE) — it’s been this way since 1865.

It was around that time that MIT was founded by scientist and educator William Barton Rogers, who had a different idea about how to educate and learn. He founded MIT to teach not only the ability to think critically but also how to apply that thinking to real-world problems — to teach craftsmen and farmers as well as engineers and academics. From that moment on, it’s been in MechE DNA to upend traditional ways of teaching and to democratize science and technology for the betterment of all.

So the motto was coined (“mens et manus,” or “mind and hand”), the seal was drawn (the scholar and the smith), and by the 1970s, when Professor Emeritus Woodie Flowers was transforming course 2.70 — now 2.007 (Design and Manufacturing) — into a project-based, get-your-hands-dirty, build-competition experience, MechE’s reputation for innovative education was already solidified. Yet the magnitude of transforming a design and manufacturing class from a mostly pencil-and-paper experience to one of fun and hands-on building was a profound paradigm shift in engineering education. 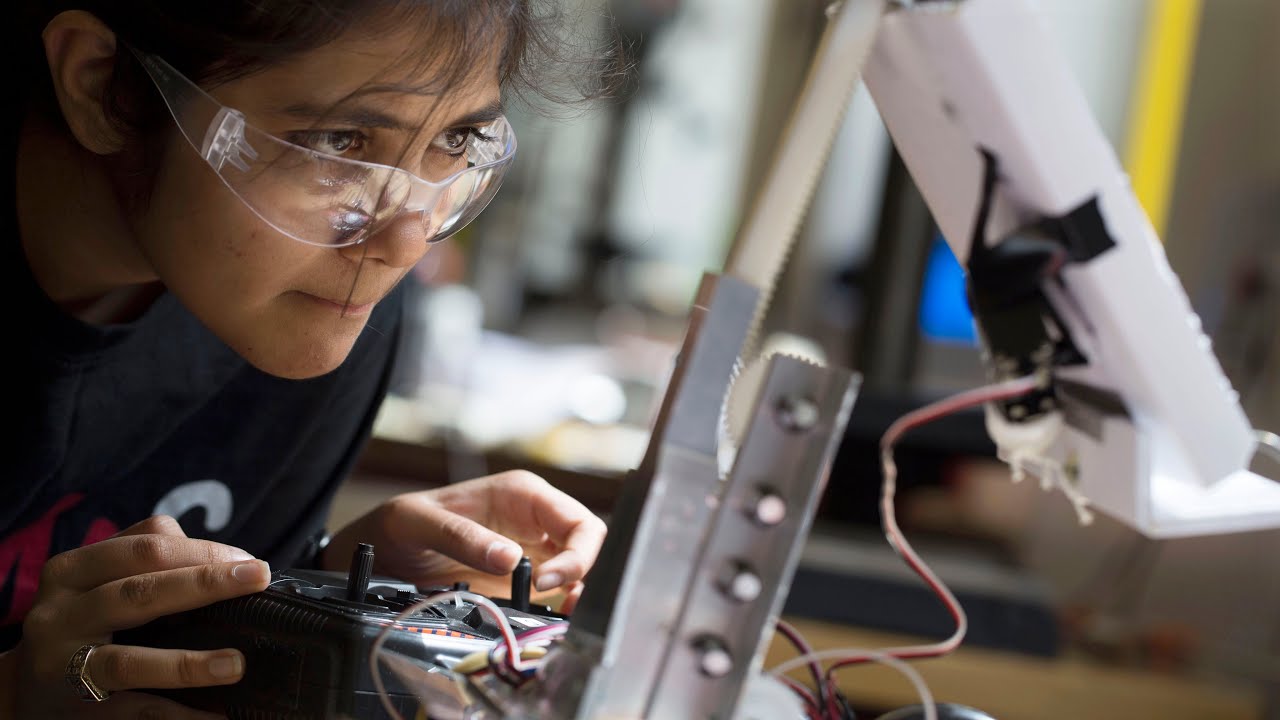 Play video
Coming to life in the 1970s with then-instructor Professor Emeritus Woodie Flowers at the lead, MIT Department of Mechanical Engineering course 2.007 (Design and Manufacturing) was at the forefront of a revolution in engineering education, as it was one of the first hands-on classes to teach students not only how to design an object but also how to build it. Today, it’s a fun celebration of making that ends in an annual head-to-head robot competition on the department's Innovation Day in May.

Knowledge is of course essential, Flowers says, because uninformed imagination can be quite dangerous, but at the same time, “nobody is getting hired to solve the multiple-choice problems at the end of the chapter.”

He created a class to prepare students not only to design an object but also to build it. From the beginning, 2.007 was meant to develop students’ competence and self-confidence as design engineers, while emphasizing the creative design process and the application of physical laws.

“I learned from my father that doing things in a different way was often fruitful, and the underpinnings of all my educational efforts is to allow people a path to change their self-image,” Flowers says. “Students might struggle with equations and other rigorous elements of an MIT education, but in 2.007 they can be superstars.”

The first challenges were purely mechanical traps and contraptions, using a universal set of materials pre-determined by Flowers, and the students loved it. Their creations went head-to-head at end-of-year competitions that became the most attended events at the Institute.

Since then, several faculty members have followed in Flowers’ footsteps as instructor of 2.70/2.007, including Professor Emeritus David Gordon Wilson; former Professor Harry West; Professor Alex Slocum; and Professor Dan Frey, each imbuing the class with a bit of their own style and personality. Along the way, the contraption competition became a robot competition, mechanical components became electromechanical ones, wires became remote controllers, and autonomous challenges were introduced.

And yet, says Assistant Professor Amos Winter, “The fundamental principles of 2.007 haven’t changed. Because core mechanical principles like forces, energy, bearings, and shafts work the same as they always have and haven’t gone out of style. Whether a car uses internal combustion or is a hybrid, it still comes down to transferring power to the road.”

In 2013, Professor Dan Frey passed the torch to Associate Professor Sangbae Kim and Winter, who are co-instructing the class. Kim is a renowned expert in biomimetics and robotics, and Winter is a leader in designing technologies for developing and emerging markets. Together the two have made several curriculum updates to the class, including eliminating exams and adding weekly written homework, weekly physical homework, and an oral design review.

As is the tradition now, the class ends in a final robot competition in which students compete against each other to see whose robot can win the most points. Each student is required to enter the competition, but only 32 finalists will enter the ring on competition day.

“The most exciting thing about 2.007 is that the students get to build their own personal robot and compete in front of an audience of more than 500 people,” Kim says. “We create a new theme every year, having in mind a particular physical task that will require the students to apply the theories they’ve learned to specific engineering functions and transfer their knowledge from paper to working robot."

This spring's competition was called “Hack to the Future,” a nod to the classic film “Back to the Future,” which had its 30th anniversary this fall. Using a universal kit of tools and materials, students were challenged to build a robot that could collect plutonium, climb the Clock Tower, slide Doc Brown down a cable, and open a DeLorean door. As always students each developed their own strategies for gaining points, and the student whose robot earned the most points at the end of each duel progressed to the next round until there was only one champion left standing: Alison Edwards, whose robot was efficient and reliable.

“I hope students in 2.007 walk away from the class with engineering intuition,” Winter says. “I want them to go out into the world around them and almost have a kind of superpower — to see what’s going on behind face value, like forces, and stresses, and energy transfer. It’s that kind of intuition that we try to build by bringing real-world examples into the classroom and showing them how to match theory with what actually happens.”