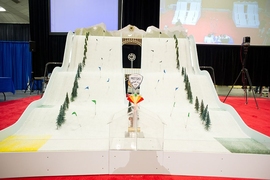 ↓ Download Image
Caption: The playing field for this year's 2.007 robotics class competition was based on the Winter Olympics. Contestants each started in one of the colored squares at the base of the slopes, in head-to-head matchups.
Credits: Photo: Tony Pulsone 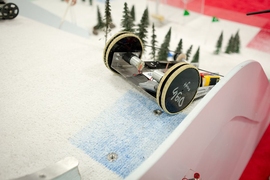 ↓ Download Image
Caption: A robot nears the crest of the ski slope in the final competition on Thursday night.
Credits: Photo: Tony Pulsone 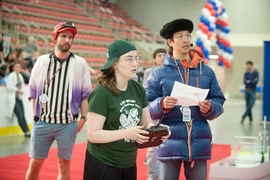 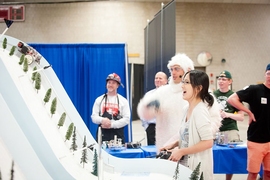 ↓ Download Image
Caption: Clare Zhang, a junior majoring in mechanical engineering, controls her robot on its way to final victory in the competition. She is watched by Amos Winter, assistant professor of mechanical engineering and co-teacher of the class, who wore a Yeti costume in keeping with the mountain theme.
Credits: Photo: Tony Pulsone 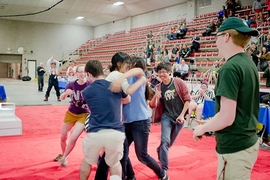 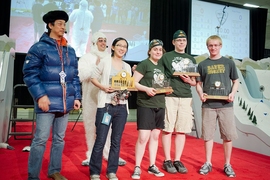 Caption:
The playing field for this year's 2.007 robotics class competition was based on the Winter Olympics. Contestants each started in one of the colored squares at the base of the slopes, in head-to-head matchups.
Credits:
Photo: Tony Pulsone

Caption:
A robot nears the crest of the ski slope in the final competition on Thursday night.
Credits:
Photo: Tony Pulsone

Caption:
Clare Zhang, a junior majoring in mechanical engineering, controls her robot on its way to final victory in the competition. She is watched by Amos Winter, assistant professor of mechanical engineering and co-teacher of the class, who wore a Yeti costume in keeping with the mountain theme.
Credits:
Photo: Tony Pulsone

This year’s arena for the annual robotics competition that caps the mechanical engineering class called 2.007 (Learning by Design) was based on a Winter Olympics theme, with dauntingly steep slopes for students’ miniature robots to ascend — and then try to descend without being flipped over.

The challenging field led, as usual, to a wide variety of designs and strategies, and even to accessories, including an elevator and a T-bar ski lift. But in the end, a no-frills robot with unflappably reliable performance took the equivalent of Olympic gold: the first-place trophy in a robotics competition that has become legendary at MIT.

Clare Zhang, a junior majoring in mechanical engineering, built that winning robot. While other students produced robots that performed added point-earning tasks — such as grabbing a gold medal, pushing a lever, or knocking over “trees” on the slope — Zhang’s approach was to zoom straight up the steepest (and highest-scoring) of three hills, and then back down again, as many times as possible, racking up points each time.

Many of the head-to-head, single-elimination matchups resulted in lopsided scores — often because robots were immobilized by flipping over, getting wedged in among the simulated trees lining the course, or suffering mechanical or electronic failures.

But the final round, pitting Zhang against a two-robot combo developed by sophomore Joshua Born, was a squeaker, with close scores throughout and frenzied cheering from the audience as the close match progressed. One of Born’s robots flipped over, but was eventually able to right itself, while the other got stuck in the trees; meanwhile, Zhang proceeded with her methodical strategy. She ultimately won, 312 to 244.

Winning is not really the point, although it makes for an exciting moment for the victors. (The top four finishers each receive trophies for their efforts.) As instructors Sangbae Kim, an associate professor of mechanical engineering, and Amos Winter, an assistant professor of mechanical engineering, explained, the most important goal is for students to learn the fundamentals of managing a complex project from end to end. Victory has no impact on a student’s grade; it merely conveys bragging rights — and a traditional victory lap in which the winner is carried around the stage by his or her professors.

At the beginning of the one-semester class, each student is issued an identical kit of parts — motors, pulleys, fasteners, and sheets and bars of metal and plastic. Over the course of the semester, participants learn to draw designs; use equipment such as water jets and lathes to shape parts; program onboard electronic controllers and remote-control systems; and test their evolving designs over and over, improving them as they go along. Only the materials provided in the kit can be used, and whatever students build has to fit within a 16-by-16 inch square on the playing field at the beginning of each round.

Not all of the 164 students in the class elect to take part in the competition; an alternative allows students to build a one-person electric vehicle instead. The 20 students who chose that option still had to compete, though: They raced their vehicles, which mostly resembled small go-carts, last weekend. During last night’s finale, held in the Johnson Ice Rink, those vehicles were on display, and were demonstrated in a parade preceding the robot matchups.

Meet the students and robots of this year's 2.007 robotics competition. (Click on Playlist to see more competitors.)

The 2.007 robotics competition, which has evolved in complexity over the years, has often been the subject of television and news stories, spawning a host of imitators ranging from similar university courses to the popular FIRST competitions for high school and middle school students. FIRST was co-founded by Woodie Flowers, the Pappalardo Professor Emeritus of Mechanical Engineering, who originated MIT’s robotics competition (then called 2.70) and ran it for many years.

In an article for El Mundo (written in Spanish), Carlos Betriu writes about the annual robotics competition that is the culmination of course 2.007. The goal of the course is to challenge students to solve problems with robots and to think creatively, Betriu reports.

Boston Globe reporter Carolyn Johnson writes about 2.007’s robotics competition. “Students competed at MITSKI, in which the robots they built from scratch had to climb ski slopes, descend them with grace, collect slalom flags, return flags to the ski chalet, and collect medals,” Johnson writes.