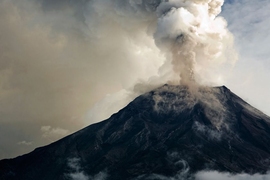 Around 252 million years ago, life on Earth collapsed in spectacular and unprecedented fashion, as more than 96 percent of marine species and 70 percent of land species disappeared in a geological instant. The so-called end-Permian mass extinction ­— or more commonly, the “Great Dying” — remains the most severe extinction event in Earth’s history.

Scientists suspect that massive volcanic activity, in a large igneous province called the Siberian Traps, may have had a role in the global die-off, raising air and sea temperatures and releasing toxic amounts of greenhouse gases into the atmosphere over a very short period of time. However, it’s unclear whether magmatism was the main culprit, or simply an accessory to the mass extinction.

MIT researchers have now pinned down the timing of the magmatism, and determined that the Siberian Traps erupted at the right time, and for the right duration, to have been a likely trigger for the end-Permian extinction.

According to the group’s timeline, explosive eruptions began around 300,000 years before the start of the end-Permian extinction. Enormous amounts of lava both erupted over land and flowed beneath the surface, creating immense sheets of igneous rock in the shallow crust. The total volume of eruptions and intrusions was enough to cover a region the size of the United States in kilometer-deep magma. About two-thirds of this magma likely erupted prior to and during the period of mass extinction; the last third erupted in the 500,000 years following the end of the extinction event. This new timeline, the researchers say, establishes the Siberian Traps as the main suspect in killing off a majority of the planet’s species.

“We now can say it’s plausible,” says Seth Burgess, who received his PhD last year from MIT’s Department of Earth, Atmospheric, and Planetary Sciences and is now a postdoc at the U.S. Geological Survey. “The connection is unavoidable, because it’s clear these two things were happening at the same time.”

Burgess and Sam Bowring, the Robert R. Shrock Professor of Earth and Planetary Science at MIT, have published their results in the journal Science Advances.

Learn how MIT researchers determined that volcanic eruptions from Siberian Traps are likely triggers for the end-Permian mass extinction.

Around the time of the end-Permian extinction, scientists have found that the Earth was likely experiencing a sudden and massive disruption to the carbon cycle, abnormally high air and sea temperatures, and an increasingly acidic ocean — all signs of a huge and rapid addition of greenhouse gases to the atmosphere. Whatever triggered the mass extinction, scientists reasoned, must have been powerful enough to generate enormous amounts of greenhouse gases in a short period of time.

The Siberian Traps have long been a likely contender: The large igneous province bears the remains of the largest continental volcanic event in Earth’s history.

“It’s literally a singular event in Earth history — it’s a monster,” Burgess says. “It makes Yellowstone … look like the head of a pin.”

It’s thought that as the region erupted, magma rose up through the Earth’s crust, essentially cooking sediments along the way and releasing enormous amounts of greenhouse gases like carbon dioxide and methane into the atmosphere.

“The question we tried to answer is, ‘Which came first, mass extinction or the Siberian Traps? What is their overall tempo, and does the timing permit magmatism to be a trigger for mass extinction?’” Burgess says.

For the answer, Burgess, Bowring, and colleagues traveled to Siberia on multiple occasions, beginning in 2008, to sample rocks from the Siberian Traps. For each expedition, the team traveled by boat or plane to a small Siberian village, then boarded a helicopter to the Siberian Traps. From there, they paddled on inflatable boats down a wide river, chiseling out samples of volcanic rock along the way.

“We’d have a couple of hundred kilos of rocks, and would go to the market in Moscow and buy 15 sport duffle bags, and in each we’d put 10 kilos of rocks … and hope we could get them all on the plane and back to the lab,” Burgess recalls.

Back at MIT, Burgess and Bowring dated select samples using uranium/lead geochronology, in which Bowring’s lab specializes. The team looked for tiny crystals of either zircon or perovskite, each of which contain uranium and lead, the ratios of which they can measure to calculate the rock’s age. The team dated various layers of rock to determine the beginning and end of the eruptions.

They then compared the timing of the Siberian Traps to that of the end-Permian extinction, which they had previously determined using identical techniques.

“That’s important, because we can compare green apples to green apples. If everything is done the same, there’s no bias,” Burgess says. “Now we’re able to say magmatism definitely preceded mass extinction, and we can resolve those two things outside of uncertainty.”

Richard Ernst, a scientist-in-residence at Carleton University in Ottawa, Ontario, says the new timeline establishes a definitive, causal link between the Siberian Traps and the end-Permian extinction.

“This paper nails it,” says Ernst, who was not involved in the study. “Given that they have dated a portion of the Siberian Traps occurring just before, during, and only for a short time after the extinction, this is the ‘smoking gun’ for this large igneous province being fully correlated with the extinction. At this point, additional dating and other studies will simply provide more details on the link.”

Now that the team has resolved the beginning and end of the Siberian Traps eruptions, Burgess hopes others will take an even finer lens to the event, to determine the tempo of magmatism in the 300,000 years prior to the mass extinction.

“We don’t know if a little erupted for 250,000 years, and right before the extinction, boom, a vast amount did, or if it was more slow and steady, where the atmosphere reaches a tipping point, and across that point you have mass extinction, but before that you just have critically stressed biospheres,” Burgess says. “Now we’ve pinned it down in time, and others can go in with other techniques to get a more fully fleshed out timeline. But we need it to start someplace, and that’s what we’ve got.”