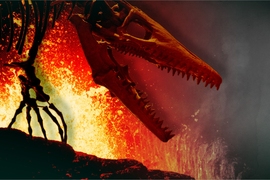 Sixty-six million years ago, an asteroid more than five miles wide smashed into the Earth at 70,000 miles per hour, instantly vaporizing upon impact. The strike obliterated most terrestrial life, including the dinosaurs, in a geological instant: Heavy dust blocked out the sun, setting off a cataclysmic chain of events from the bottom of the food chain to the top, killing off more than three-quarters of Earth’s species — or so the popular theory goes.

But now scientists at MIT and elsewhere have found evidence that a major volcanic eruption began just before the impact, possibly also playing a role in the extinction.

The team precisely dated rocks from the Deccan Traps — a region of west-central India that preserves remnants of one of the largest volcanic eruptions on Earth. Based on their analysis, the researchers determined that the eruption began 250,000 years before the asteroid strike and continued for 500,000 years after the giant impact, spewing a total of 1.5 million square kilometers of lava.

The immense and long-lasting volcanism may have released dangerous levels of volatile chemicals into the air, poisoning the atmosphere and oceans.

“If models of volatile release are correct, we’re talking about something similar to what’s happening today: lots of carbon dioxide being emitted into the atmosphere very rapidly,” says Michael Eddy, a graduate student in MIT’s Department of Earth, Atmospheric and Planetary Sciences (EAPS). “Ultimately what that can do is lead to ocean acidification, killing a significant portion of plankton — the base of the food chain. If you wipe them out, then you’d have catastrophic effects.”

Based on the new, more precise dates for the Deccan Traps, the researchers believe the massive eruptions may have played a significant role in extinguishing the dinosaurs — although the exact kill mechanism may never be known.

“I don’t think the debate will ever go away,” says Sam Bowring, the Robert R. Shrock Professor of Earth and Planetary Sciences at MIT. “The [asteroid] impact may have caused the extinction. But perhaps its effect was enhanced because things were softened up a bit by the eruption of these volcanoes.”

Bowring and Eddy are authors of a paper published in Science, along with colleagues at Princeton University, the University of Lausanne in Switzerland, and Amravati University in India.

Prior to 1980, the exact cause of dinosaurs’ demise was unknown; one hypothesis proposed that they were killed off by massive volcanic eruptions. (Similar episodes have subsequently been shown to have played a role in two other mass extinctions, the end-Permian and end-Triassic.) But the 1980 discovery in Italy of iridium, a rare element primarily found in extraterrestrial materials, suggested otherwise.

“They eventually found a crater in the early ’90s, so the smoking gun of the story seemed to be perfect: An asteroid caused the mass extinction,” Eddy says. “In fact, a few people have suggested that there is evidence for environmental degradation before the impact.”

It’s long been known that a major eruption occurred in India around the time of the end-Cretaceous extinction, but this event had never been precisely dated. The MIT and Princeton researchers used high-precision geochronology to determine the age of rocks in the Deccan Traps, to evaluate whether the eruptions began before the extinction — a necessity, if volcanism was indeed the cause.

“The story that is emerging is that perhaps both might have been involved,” Bowring says. “Perhaps the end of the dinosaurs was caused by a one-two punch.”

Dating from the bottom up

In December 2013, the team made an expedition to the Deccan Traps, east of Mumbai, a region known for its expansive, step-like topology. (The term “traps” is Swedish for “stairs.”)

For two weeks, the researchers looked for volcanic rocks that might contain zircon — a uranium-containing mineral that forms in magma shortly after an eruption, and that can be used as a very precise clock for determining the age of rocks; the mineral typically crystallizes in magma containing high amounts of silica and zirconium.

The researchers collected more than 50 samples of rocks from the region representing the largest pulse of volcanism. Fortunately, samples from both the bottom and top of this volcanic layer contained zircon, allowing the team to pinpoint the timing of the beginning and end of the Deccan Traps eruptions.

The researchers analyzed the rocks separately at Princeton and MIT to make sure the dates determined in one lab could be replicated in another lab. In both laboratories, the scientists pulverized rocks and separated out millimeter-length grains of zircon. To determine the age of zircon, and the rock from which it came, the teams measured the ratio of uranium to lead isotopes.

The group’s analysis indicates that the region of the Deccan Traps started erupting 250,000 years before the asteroid strike, continuing for another 500,000 years after the impact.

“We have 750,000 years as the duration for the main pulse of volcanism, but it’d be nice to know whether that time represents a constant flux of magma, or if pulses of magmatism were erupted over an even shorter period of time,” Eddy says. “Can we pick things apart at the 10,000-year level and see correlations between an individual pulse of volcanism and environmental change? That’s where we need to go with this study.”

Adds Bowring: “We’re getting better and better at dating mass-extinction events, but we’re not having a comparable improvement in our understanding of what caused them. Now that the timing is so well-resolved, I think there will be people coming back to think about the cause with new vigor.”

Wall Street Journal reporter Atish Patel highlights new MIT research indicating that volcanic activity may have contributed to the extinction of the dinosaurs. Patel explains that the findings suggest “dinosaurs were already in decline, suffering from the climate change prompted by the volcanic eruptions.”

Researchers have uncovered evidence that volcanic activity could have contributed to the extinction of dinosaurs, reports Joel Achenbach for The Washington Post. Prof. Sam Bowring says the eruption “began just prior to the extinction and continued throughout.”