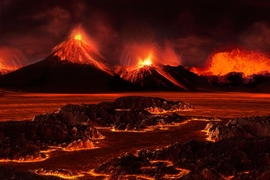 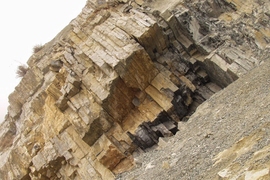 ↓ Download Image
Caption: A photo of the permian triassic boundary at Meishan, China. This photo shows the limestone beds in between the volcanic ash beds that the researchers were able to date.
Credits: Photo: Shuzhong Shen

Caption:
A photo of the permian triassic boundary at Meishan, China. This photo shows the limestone beds in between the volcanic ash beds that the researchers were able to date.
Credits:
Photo: Shuzhong Shen

The largest mass extinction in the history of animal life occurred some 252 million years ago, wiping out more than 96 percent of marine species and 70 percent of life on land — including the largest insects known to have inhabited the Earth. Multiple theories have aimed to explain the cause of what’s now known as the end-Permian extinction, including an asteroid impact, massive volcanic eruptions, or a cataclysmic cascade of environmental events. But pinpointing the cause of the extinction requires better measurements of how long the extinction period lasted.

Now researchers at MIT have determined that the end-Permian extinction occurred over 60,000 years, give or take 48,000 years — practically instantaneous, from a geologic perspective. The new timescale is based on more precise dating techniques, and indicates that the most severe extinction in history may have happened more than 10 times faster than scientists had previously thought.

“We’ve got the extinction nailed in absolute time and duration,” says Sam Bowring, the Robert R. Shrock Professor of Earth and Planetary Sciences at MIT. “How do you kill 96 percent of everything that lived in the oceans in tens of thousands of years? It could be that an exceptional extinction requires an exceptional explanation.”

In addition to establishing the extinction’s duration, Bowring, graduate student Seth Burgess, and a colleague from the Nanjing Institute of Geology and Paleontology also found that, 10,000 years before the die-off, , the oceans experienced a pulse of light carbon, which likely reflects a massive addition of carbon dioxide to the atmosphere. This dramatic change may have led to widespread ocean acidification and increased sea temperatures by 10 degrees Celsius or more, killing the majority of sea life.

But what originally triggered the spike in carbon dioxide? The leading theory among geologists and paleontologists has to do with widespread, long-lasting volcanic eruptions from the Siberian Traps, a region of Russia whose steplike hills are a result of repeated eruptions of magma. To determine whether eruptions from the Siberian Traps triggered a massive increase in oceanic carbon dioxide, Burgess and Bowring are using similar dating techniques to establish a timescale for the Permian period’s volcanic eruptions that are estimated to have covered over five million cubic kilometers.

“It is clear that whatever triggered extinction must have acted very quickly,” says Burgess, the lead author of a paper that reports the results in this week’s Proceedings of the National Academy of Sciences, “fast enough to destabilize the biosphere before the majority of plant and animal life had time to adapt in an effort to survive.”

Pinning dates on an extinction

In 2006, Bowring and his students made a trip to Meishan, China, a region whose rock formations bear evidence of the end-Permian extinction; geochronologists and paleontologists have flocked to the area to look for clues in its layers of sedimentary rock. In particular, scientists have focused on a section of rock that is thought to delineate the end of the Permian, and the beginning of the Triassic, based on evidence such as the number of fossils found in surrounding rock layers.

Bowring sampled rocks from this area, as well as from nearby alternating layers of volcanic ash beds and fossil-bearing rocks. After analyzing the rocks in the lab, his team reported in 2011 that the end-Permian likely lasted less than 200,000 years. However, this timeframe still wasn’t precise enough to draw any conclusions about what caused the extinction.

Now, the team has revised its estimates using more accurate dating techniques based on a better understanding of uncertainties in timescale measurements.

With this knowledge, Bowring and his colleagues reanalyzed rock samples collected from five volcanic ash beds at the Permian-Triassic boundary. The researchers pulverized rocks and separated out tiny zircon crystals containing a mix of uranium and lead. They then isolated uranium from lead, and measured the ratios of both isotopes to determine the age of each rock sample.

From their measurements, the researchers determined a much more precise “age model” for the end-Permian extinction, which now appears to have lasted about 60,000 years — with an uncertainty of 48,000 years — and was immediately preceded by a sharp increase in carbon dioxide in the oceans.

‘Spiraling toward the truth’

The new timeline adds weight to the theory that the extinction was triggered by massive volcanic eruptions from the Siberian Traps that released volatile chemicals, including carbon dioxide, into the atmosphere and oceans. With such a short extinction timeline, Bowring says it is possible that a single, catastrophic pulse of magmatic activity triggered an almost instantaneous collapse of all global ecosystems.

Andrew Knoll, a professor of earth and planetary sciences at Harvard University, says the group’s refined timeline will give scientists an opportunity to test whether the timing of the Siberian Traps eruptions coincides with the extinction.

“Most mechanisms proposed to account for the observed pattern of extinction rely on rapid environmental change, so the sharp constraints on timing also serve as tests of these ideas,” Knoll says.  “[This new timeline] bring us closer to the resolution of a major problem posed by the geologic record.”

“We’ve refined our approach, and now we have higher accuracy and precision,” Bowring says. “You can think of it as slowly spiraling in toward the truth.”

Becky Oskin writes in Scientific American about new research from MIT’s Department of Earth, Atmospheric and Planetary Science that pinpoints the duration of Earth’s worst mass-extinction. The work could help researchers identify what triggered the die-off.