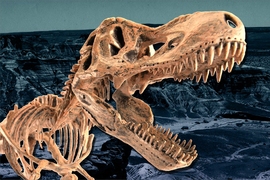 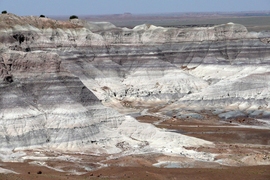 ↓ Download Image
Caption: The Blue Mesa locality of the Petrified Forest National Park in Arizona contains the Late Triassic continental sedimentary rocks of the Chinle Formation. Near Blue Mesa, the oldest documented dinosaur remains in the Chinle Formation have been found.
Credits: Courtesy of Malka Machlus from Lamont-Doherty Earth Observatory of Columbia University 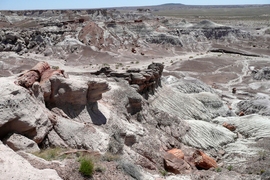 ↓ Download Image
Caption: At the Blue Mesa locality of the Petrified Forest National Park, a few logs of petrified wood (rust colors) crop out from within sandstones (white).
Credits: Courtesy of Malka Machlus from Lamont-Doherty Earth Observatory of Columbia University

The Jurassic and Cretaceous periods were the golden age of dinosaurs, during which the prehistoric giants roamed the Earth for nearly 135 million years. Paleontologists have unearthed numerous fossils from these periods, suggesting that dinosaurs were abundant throughout the world. But where and when dinosaurs first came into existence has been difficult to ascertain.

Fossils discovered in Argentina suggest that the first dinosaurs may have appeared in South America during the Late Triassic, about 230 million years ago — a period when today’s continents were fused in a single landmass called Pangaea. Previously discovered fossils in North America have prompted speculation that dinosaurs didn’t appear there until about 212 million years ago — significantly later than in South America. Scientists have devised multiple theories to explain dinosaurs’ delayed appearance in North America, citing environmental factors or a vast desert barrier.

But scientists at MIT now have a bone to pick with such theories: They precisely dated the rocks in which the earliest dinosaur fossils were discovered in the southwestern United States, and found that dinosaurs appeared there as early as 223 million years ago. What’s more, they demonstrated that these earliest dinosaurs coexisted with close nondinosaur relatives, as well as significantly more evolved dinosaurs, for more than 12 million years. To add to the mystery, they identified a 16-million-year gap, older than the dinosaur-bearing rocks, where there is either no trace of any vertebrates, including dinosaurs, in the rock record, or the corresponding rocks have eroded.

“Right below that horizon where we find the earliest dinosaurs, there is a long gap in the fossil and rock records across the sedimentary basin,” says Jahan Ramezani, a research scientist in MIT’s Department of Earth, Atmospheric and Planetary Sciences. “If the record is not there, it doesn’t mean the dinosaurs didn’t exist. It means that either no fossils were preserved, or we haven’t found them. That tells us the theory that dinosaurs simply started in South America and spread all over the world has no firm basis.”

Ramezani details the results of his geochronological analysis in the American Journal of Science. The study’s co-authors are Sam Bowring, the Robert R. Shrock Professor of Geology at MIT, and David Fastovsky, professor of geosciences at the University of Rhode Island.

The most complete record of early dinosaur evolution can be found in Argentina, where layers of sedimentary rock preserve a distinct evolutionary progression: During the Late Triassic period, preceding the Jurassic, dinosaur “precursors” first appeared, followed by animals that began to exhibit dinosaur-like characteristics, and then advanced, or fully evolved, dinosaurs. Each animal group is found in a distinct rock formation, with very little overlap, revealing a general evolutionary history.

In comparison, the dinosaur record in North America is a bit muddier. The most abundant fossils from the Late Triassic period have been discovered in layers of rock called the Chinle Formation, which occupies portions of Arizona, New Mexico, Utah, and Colorado, and is best exposed in Petrified Forest National Park. Scientists had previously dated isolated beds of this formation, and determined the earliest dinosaur-like animals, discovered in New Mexico, appeared by 212 million years ago.

Ramezani and Bowring sought to more precisely date the entire formation, including levels in which the earliest dinosaur fossils have been found. The team took samples from exposed layers of sedimentary rock that were derived, in large part, from volcanic debris in various sections of the Chinle Formation. In the lab, the researchers pulverized the rocks and isolated individual microscopic grains of zircon — a uranium-bearing mineral that forms in magma shortly prior to volcanic eruptions. From the moment zircon crystallizes, the decay of uranium to lead begins in the mineral and, as Ramezani explains it, “the chronometer starts.” Researchers can measure the ratio of uranium to lead isotopes to determine the age of the zircon, and, inferentially, the rock in which it was found.

The Blue Mesa locality of the Petrified Forest National Park in Arizona contains the Late Triassic continental sedimentary rocks of the Chinle Formation. Near Blue Mesa, the oldest documented dinosaur remains in the Chinle Formation have been found.
Courtesy of Malka Machlus from Lamont-Doherty Earth Observatory of Columbia University

At the Blue Mesa locality of the Petrified Forest National Park, a few logs of petrified wood (rust colors) crop out from within sandstones (white).
Courtesy of Malka Machlus from Lamont-Doherty Earth Observatory of Columbia University

A unique but incomplete record

The team analyzed individual grains of zircon, and created a precise map of ages for each sedimentary interval of the Chinle Formation. Ramezani found, based on rock ages, that the fossils found in New Mexico are, in fact, not the earliest dinosaurs in North America. Instead, it appears that fossils found in Arizona are older, discovered in rocks as old as 223 million years.

In this North American mix, the early relatives of dinosaurs apparently coexisted with more evolved dinosaurs for more than 12 million years, according to Ramezani’s analysis.

“In South America, there is very little overlap,” Ramezani says. “But in North America, we see this unique interval when these groups were coexisting. You could think of it as Neanderthals coexisting with modern humans.”

While fascinating to think about, Ramezani says this period does not shed much light on when the very first dinosaurs appeared in North America.

“The fact that our record starts with advanced forms tells us there was a prior history,” Ramezani says. “It’s not just that advanced dinosaurs suddenly appeared 223 million years ago. There must have been prior evolution in North America — we just haven’t identified any earlier dinosaurs yet.”

He says the answer to when dinosaurs first appeared in North America may lie in a 16-million-year gap, in the lower Chinle Formation and beneath it, which bears no fossils, dinosaurian or otherwise. The absence of any fossils is unremarkable; Ramezani notes that fossil preservation is “an exceptional process, requiring exceptional circumstances.” Dinosaurs may well have first appeared during this period; if they left any fossil evidence, it may have since been erased.

“Every study like this is a step forward, to try to reconstruct the past,” Ramezani says. “Dinosaurs really rose to the top of the pyramid. What made them so successful, and what were the evolutionary advantages they developed so as to dominate terrestrial ecosystems? It all goes back to their beginning, to the Late Triassic when they just started to appear.”

The new dates provide a framework against which other theories of dinosaur evolution may be tested, says Raymond Rogers, a professor of geology at Macalester College in Saint Paul, Minn., who was not involved in this work.

“This is the kind of careful work that needs to be done before evolutionary hypotheses that relate to the origination and diversification of the dinosaurs can be addressed,” Rogers says. “This gap in the Chinle fossil record makes comparing the North American and South American dinosaur records problematic. Existing hypotheses that relate to the timing of dinosaur evolution in North and South America arguably need to be reconsidered in light of this new study.”

This research was supported by funding from the National Science Foundation.

At the core of a continent