Nov. 19 was Day 379 in the construction of MIT.nano, the nanoscale characterization and fabrication facility scheduled to open in June 2018. It also marked the halfway point in the excavation phase of this ambitious and complex capital project situated in the center of campus. “Forty-nine percent of the dig is done, and we’ve hauled out 17,000 cubic yards of fill,” says Richard Amster, director of campus construction. “Only 621 days to go.”

Day 379 was also when staff from the Department of Facilities, their contractors, and MIT.nano convened the third in a series of “tool talks” — sessions that provide the MIT community with an insiders’ view of construction tools and techniques in use on the site.

Outside the session’s Building 4 conference room window, a 15-foot-deep hole and small hill of fill inside the footprint of the former Building 12 are the early indicators of a much larger project. Excavators and trucks edge carefully in and out of the site, hauling away what will eventually amount to 57 thousand tons of fill. “Coordinating the digging and hauling is tough on such a tight site,” says Travis Wanat, senior project manager. “And characterizing the dirt isn’t a trivial task either.” 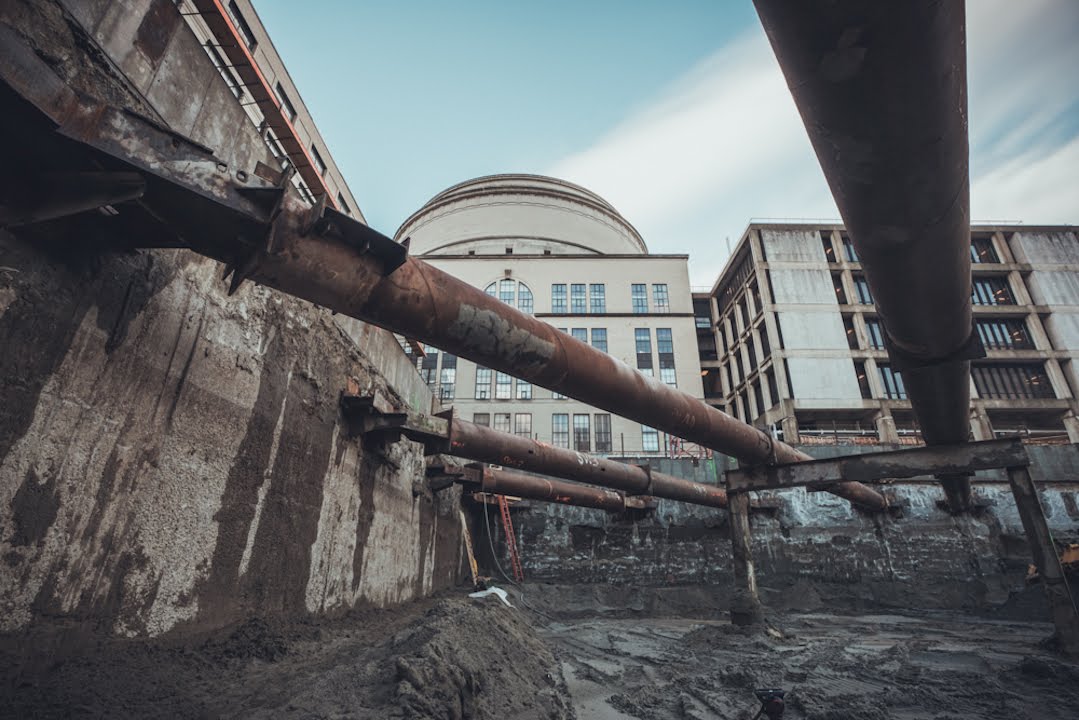 Play video
MIT.nano required the excavation of a 200,000 square ft hole in the heart of campus. How did that get accomplished? 1,000 yards of sand were trucked out daily.

All of the dirt must be evaluated, explains Keith Johnson, a geotechnical consultant with Haley and Aldrich, a consulting company specializing in underground engineering and environmental science working on MIT.nano. “We collect soil samples at 5- to 5-foot depth intervals, and classify what we find using a portable scanning instrument,” he says. If the scans find high enough levels of volatile organic compounds, for instance, then the fill must be evaluated using analytical testing methods for the soils at that specific location. The test results for the soils at Building 12 indicate low levels of contamination for historic urban fill.

For his soil studies, Johnson delves not just into the Earth but back in time. In addition to the original Building 12 plans, Johnson studied historical maps that show the campus rising on the edge of a sea wall constructed along the Charles River. “At MIT, we have going for us what they used for fill in the late 1800s,” said Johnson. The land on which campus buildings were constructed came from river dredging, and in this soil layer Johnson found “nothing unusual.” However, the dig has uncovered unmistakable evidence of the brackish origins of MIT fill, he says: the “overpowering smell of hydrogen sulfide,” a naturally occurring gas “that’s been under the organic soils for the last 100 years. It comes from clams.”

With 600-800 cubic yards of fill leaving the site each day, it’s a “constant battle to minimize the amount of mud that gets on truck tires,” notes Peter Johnson, the project lead for Turner Construction. Rainy days pose enormous challenges for managers who need to avoid tracking excavation muck out of the site and onto Cambridge roads. So trucks moving in and out of the site use a road surfaced with “riprap,” a special kind of gravel that pulls debris from tires — like wiping shoes on a welcome mat. Workers also hose down truck tires constantly, and a street sweeper comes by multiple times a day. Sump pumps forcing 10 gallons per minute out of the bottom of the excavation help keep the site as dry as possible.

As the excavation reaches the sand layer (about 15 feet down), contractors install diagonal steel tubes as corner bracing against the newly exposed slurry walls, said Johnson. This prevents the dirt on the outside of the walls from exerting excessive pressure on the perimeter of the dig. The goal is to avoid lateral or vertical movement in these walls, and to that end, said Wanat, “we take readings with a variety of instruments, and maintain a lot of monitoring points.”

After the excavation concludes, at a depth of approximately 30 feet, MIT.nano will begin its next construction phase: the laying of a concrete ground floor slab. This process is scheduled to start in December, and spring will bring big, above-ground construction, and, at last, the rise of steel support towers and the structure itself.

The leadership team for the MIT.nano project is holding community meetings on Dec. 10 and 11 to present information and hear about opportunities for engagement with the MIT community. Please join them Thursday, Dec. 10, from 2:30-3:30 p.m. in room 26-100, and Friday, Dec. 11, from 10-11 a.m. in room 1-190. For more information about the project, contact mitnano@mit.edu or visit mitnano.mit.edu.

Ship in a bottle