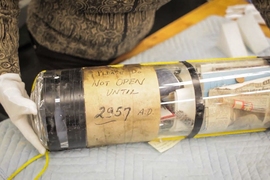 ↓ Download Image
Caption: During excavation for MIT.nano, the Department of Facilities unearthed an unexpected relic between buildings 12 and 26: a time capsule buried on June 5, 1957, to commemorate the opening of the Karl Taylor Compton Laboratories.
Credits: Melanie Gonick/MIT 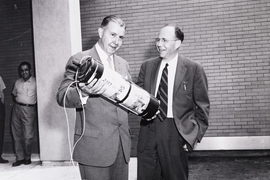 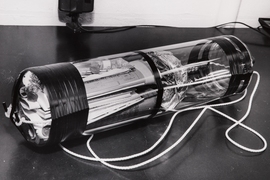 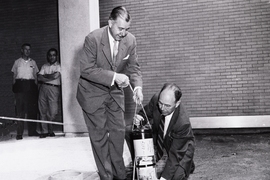 During excavation for MIT.nano, the Department of Facilities unearthed an unexpected relic between buildings 12 and 26: a time capsule buried on June 5, 1957, to commemorate the opening of the Karl Taylor Compton Laboratories.

While the object initially appeared to be part of an existing utility system, upon further inspection staff members confirmed that it was, in fact, a time capsule containing historical artifacts. The discovery of the time capsule came as a surprise, offering an interesting look at MIT’s past, according to Deborah Douglas, director of collections for the MIT Museum.

“MIT likes to be rational and future-oriented, but this is a remarkably sentimental activity and sweet moment,” Douglas says. “I think it reminds us of a community that also likes to mark special occasions and moments.”

Back in the early stages of construction for MIT.nano, members of the crew stumbled upon something that clearly didn't belong: A time capsule buried in 1957 as part of the dedication to the Compton Laboratories.

President James R. Killian Jr. and professor of electrical engineering Harold “Doc” Edgerton buried the container in the spring of 1957, five days before the dedication of Compton Laboratories. Douglas explains that at MIT the spring of 1957 was a moment of great optimism.

“Remember that this was just four months prior to the launch of Sputnik and the start of the ‘Space Race’ with the Soviet Union. MIT researchers were focused on developing the technologies of the future and they were excited about the completion of the Compton Laboratories,” Douglas notes. “The new building was to serve as the home of the Research Laboratory of Electronics [RLE], the Laboratory for Nuclear Science, and the Computation Center, and was to house a new IBM 704 mainframe computer. Students and researchers would be able to come to the building with their punch cards to run their studies.”

The time capsule was a specially designed glass cylinder, created at the RLE Glass Blowing Lab to keep the object’s contents airtight. An article published in the June 4, 1957, edition of Tech Talk notes that the contents of the time capsule were “sealed into their glass tomb with blowtorches wielded by RLE glassblowers Lawrence Ryan and Anthony Velluto.”

Douglas notes that several time capsules have been created at MIT to mark anniversaries and special occasions. There are at least eight capsules known to be buried on campus, honoring such occasions as the installation of a cyclotron on campus in 1939 and the inauguration of President Charles M. Vest, and in honor of the accomplishments made by researchers at Building 20, which was home to the Radiation Laboratory and many other innovative research projects before it was replaced by the Ray and Maria Stata Center.

“It’s part ship in a bottle, part letter to the future, and we do it often,” Douglas says. “We seem to have this impulse to collect and to be deliberate about communicating with our future selves.”

What makes the 1957 time capsule intriguing, Douglas explains, are the instructions for when it should be opened. Most time capsules contain directions specifying that the container be opened in 50 or 75 years, so that a living witness could be present when it is unearthed and reopened.

The 1957 capsule is “very unusual in the sense that it proposes an opening date of 1,000 years from its burial,” Douglas says. “There is not enough information from what we have to discern how serious the time capsule’s creators were about that deadline.”

To ensure that the capsule’s contents were protected from decomposition during their 1,000-year burial, the cylinder was filled with argon gas before it was sealed. Also placed inside the capsule, according to the MIT News Service, was a small quantity of carbon-14 so that “if the cylinder should be cracked and if the documents should be destroyed, this can be used by scientists of the future to determine with considerable accuracy the date at which the capsule was buried.”

In a letter placed inside the time capsule, Killian wrote that the capsule contains “documents and mementos which tell something of the state of science, technology and education and, more specifically, the state of the Massachusetts Institute of Technology” in 1957. Materials inside the capsule include a copy of “A Scientist Speaks,” by Karl T. Compton, new coins from the First National Bank of Boston, a keepsake mug for the Class of 1957, an empty tonic bottle, and a small container of synthetic penicillin. Additionally, Tech Talk notes that the cylinder also contained a cryotron, “the tiny unit invented at MIT this year which will replace complex tubes and expensive transistors in electronic computers of the future.”

The discovery of the 1957 capsule provides evidence of MIT’s longstanding commitment to documenting the past and its dedication to creating a better future, Douglas says.

“Normally our conversation with the future is through the things we invent or the discoveries we make,” she says. “We don’t very often write actual letters, seal up boxes of memories, or create a hope chest for the future. But for all the sweetness and sentimentality of the time capsule, MIT does care passionately about the future, making this a lovely reminder of a quality the Institute is best known for.”

A time capsule buried in 1957 by former MIT President James R. Killian and Prof. Harold Edgerton will be unveiled in 2957 a full millennium after its burial, writes Michele Debczak for Salon.

A glass time capsule from 1957 has been unearthed during excavation for MIT.nano, reports Steve Annear for The Boston Globe. Deborah Douglas, director of collections for the MIT Museum, says that the capsule is “a wonderful gesture, executed MIT-style.”

Boston.com reporter Nina Godlewski writes that a time capsule from 1957 has been discovered at MIT. The capsule was a “specially designed glass cylinder and contained argon gas to preserve the contents. A little bit of carbon-14 was also added so scientists could date the capsule.”

Popular Science reporter Mary Beth Griggs writes about the discovery of a time capsule from 1957 during excavation for MIT.nano. Griggs writes that the capsule had “been in the ground for 58 years, but it was supposed to be in place for much longer.”

Ship in a bottle