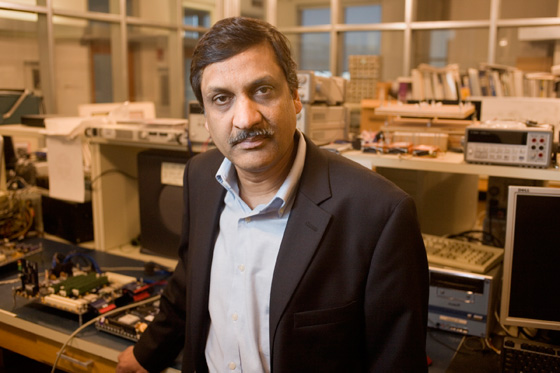 It’s midnight, and Anant Agarwal is still at his computer.

He’s not, however, tying up administrative loose ends before stepping down as director of MIT’s Computer Science and Artificial Intelligence Laboratory (CSAIL). Neither is he exchanging ideas with his collaborators on the major microchip-design project he’s leading, nor debating strategy with any of the other board members at Tilera, the chip company he founded in 2004.

Instead, he’s in an online discussion forum, talking about basic circuit design with students around the world — a group that includes high schoolers, undergraduates, mid-career professionals and at least one octogenarian retiree.

A decade ago, MIT broke ground with its OpenCourseWare initiative, which made MIT course materials, such as syllabi and lecture notes, publicly accessible. But over the last five years, MIT Provost L. Rafael Reif has led an effort to move the complete MIT classroom experience online, with video lectures, homework assignments, lab work — and a grade at the end.

That project, called MITx, launched late last year. On March 16, Reif announced that Agarwal would step down as CSAIL director in order to lead MIT’s Open Learning Enterprise, which will oversee MITx’s development.

“I’ve done a few startups, and even as a professor, you want to eat your own dog food,” Agarwal says. Hence his late-evening sessions on the bulletin board for MITx’s prototype course, “Circuits and Electronics.”

On at least one occasion, one of those answers drew a skeptical response from another forum participant. “Someone said, ‘Whoa, is that really true?’” Agarwal says. “And someone else responded, ‘What do you think aa stands for? That’s Anant Agarwal!’”

In fact, the discussion forum has emerged as a vital educational tool in itself. Before 6.002x launched in early March, “the thing that kept me up nights was worrying how this thing would scale,” Agarwal says. “We have the number of TAs you would expect for a class with 100 or 200 people. How were they going to keep up with all the questions?”

To Agarwal’s delight, however, he’s had to ask the course teaching assistants not to answer forum questions too readily. “The students usually figure it out for themselves,” Agarwal says. And that, he believes, improves their educational experience. “I know from teaching, you never really learn something until you have to teach it,” he says.

Beyond the discussion forum, 6.002x students have built their own communities around the course — both online, through vehicles such as Facebook groups, and in the real world, meeting in person to discuss course content and assignments. 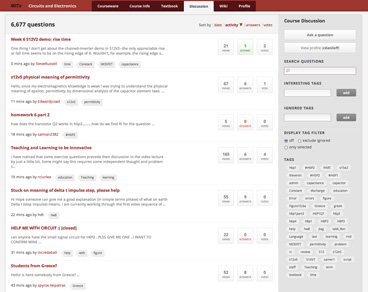 A screenshot from the MITx discussion board

Late one night, Agarwal was logged in to the forum and saw a post by a student who was having trouble with the material and planned to drop the course. “Many of the students responded saying, ‘Hey, we’ve found a little group of us who are working on this course in your neighborhood. Hang in there. Don’t quit. We’re going to help you,’” Agarwal says. “That was pretty amazing.”

Students have even written their own computer programs to augment the MITx interface or present course data in helpful new ways. “We have a small team of developers,” Agarwal says. “They’re absolute rock stars, but still it’s a very, very small team. Clearly they can’t do all of this. As people have requested improvements, many of the students themselves are giving us pieces of code and technologies that we are now making available worldwide. The whole site and experience can improve in a very organic manner. That is completely mind-boggling. It’s something I did not expect.”

A man with a plan

Agarwal, who has been teaching at MIT for 24 years, is a pioneer in the development of parallel computers. Tilera, which grew out of work that his MIT research group began in 1997, has been shipping 64-core chips since 2007. And in 2010, Agarwal was tapped to lead Project Angstrom, one of four initiatives — and the only one centered at a university — that divided $80 million in funding from the Defense Advanced Research Projects Agency to study massively parallel computing systems.

His selection as head of the Open Learning Enterprise, however, may have more to do with his innovations in online education. Teaching 6.002 to MIT undergraduates, he developed a program, called WebSim, that allowed students to process real-world electrical signals — such as the audio signal from an MP3 player — by assembling virtual circuits on a computer screen rather than physical circuits at a lab bench. “I’ve been hacking around on it for 10 years,” Agarwal says. Aspects of the software that 6.002x students are now using to fulfill their lab requirements were modeled on WebSim.

The development of such online-learning tools will be crucial to MITx’s expansion. “How do you put a chemistry lab online?” Agarwal asks. “We’re just getting started here. Figuring out how to tailor the platform for MIT’s many disciplines will require collaboration across all our schools.”

Grading has to be automated as well, as it is in 6.002x. “How do you automate the grading of free-form responses, like essay questions?” Agarwal asks. “I can imagine researchers at MIT getting very excited about that question.”

For instance, he says, if lectures and grading could be automated, professors and TAs would have more time for working directly with students, perhaps on open-ended research projects that mimic — much better than problem sets do — the way in which science and engineering are done in the real world. Similarly, web tools developed through MITx could enable students to learn in a more interactive fashion, at their own pace — and on their own schedule. “There’s no way I would get up for an 8 a.m. class,” Agarwal says. “But I do a lot of work at night.”

Ultimately, Agarwal says, part of the appeal of working on MITx is that “no one knows how it’s going to evolve. But it has the potential to change the world.”

Prof. Anant Agarwal, CEO of edX, writes for U.S. News and World Report about how MOOCs can improve lives around the world. Agarwal writes that MOOCS have, “demonstrated potential benefit as a catalyst for change within universities and all over the world. MOOC platforms have helped entire countries build their labor forces and create conduits for dramatic social change.”

Brooke Borel profiles edX CEO Professor Anant Agarwal for Popular Science. Agarwal recalls what the experience of failing his physics midterm as a college freshman taught him about how the quality of education varies throughout the world.