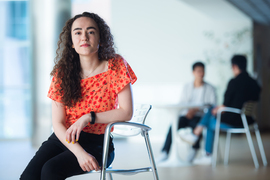 Typically, it would take two graduate students to do the research that Setayesh Radkani is doing.

Driven by an insatiable curiosity about the human mind, she is working on two PhD thesis projects in two different cognitive neuroscience labs at MIT. For one, she is studying punishment as a social tool to influence others. For the other, she is uncovering the neural processes underlying social learning — that is, learning from others. By piecing together these two research programs, Radkani is hoping to gain a better understanding of the mechanisms underpinning social influence in the mind and brain.

Radkani lived in Iran for most of her life, growing up alongside her younger brother in Tehran. The two spent a lot of time together and have long been each other’s best friends. Her father is a civil engineer, and her mother is a midwife. Her parents always encouraged her to explore new things and follow her own path, even if it wasn’t quite what they imagined for her. And her uncle helped cultivate her sense of curiosity, teaching her to “always ask why” as a way to understand how the world works.

Growing up, Radkani most loved learning about human psychology and using math to model the world around her. But she thought it was impossible to combine her two interests. Prioritizing math, she pursued a bachelor’s degree in electrical engineering at the Sharif University of Technology in Iran.

Then, late in her undergraduate studies, Radkani took a psychology course and discovered the field of cognitive neuroscience, in which scientists mathematically model the human mind and brain. She also spent a summer working in a computational neuroscience lab at the Swiss Federal Institute of Technology in Lausanne. Seeing a way to combine her interests, she decided to pivot and pursue the subject in graduate school.

An experience leading a project in her engineering ethics course during her final year of undergrad further helped her discover some of the questions that would eventually form the basis of her PhD. The project investigated why some students cheat and how to change this.

“Through this project I learned how complicated it is to understand the reasons that people engage in immoral behavior, and even more complicated than that is how to devise policies and react in these situations in order to change people’s attitudes,” Radkani says. “It was this experience that made me realize that I’m interested in studying the human social and moral mind.”

She began looking into social cognitive neuroscience research and stumbled upon a relevant TED talk by Rebecca Saxe, the John W. Jarve Professor in Brain and Cognitive Sciences at MIT, who would eventually become one of Radkani’s research advisors. Radkani knew immediately that she wanted to work with Saxe. But she needed to first get into the BCS PhD program at MIT, a challenging obstacle given her minimal background in the field.

After two application cycles and a year’s worth of graduate courses in cognitive neuroscience, Radkani was accepted into the program. But to come to MIT, she had to leave her family behind. Coming from Iran, Radkani has a single-entry visa, making it difficult for her to travel outside the U.S. She hasn’t been able to visit her family since starting her PhD and won’t be able to until at least after she graduates. Her visa also limits her research contributions, restricting her from attending conferences outside the U.S. “That is definitely a huge burden on my education and on my mental health,” she says.

Still, Radkani is grateful to be at MIT, indulging her curiosity in the human social mind. And she’s thankful for her supportive family, who she calls over FaceTime every day.

Modeling how people think about punishment

In Saxe’s lab, Radkani is researching how people approach and react to punishment, through behavioral studies and neuroimaging. By synthesizing these findings, she’s developing a computational model of the mind that characterizes how people make decisions in situations involving punishment, such as when a parent disciplines a child, when someone punishes their romantic partner, or when the criminal justice system sentences a defendant. With this model, Radkani says she hopes to better understand “when and why punishment works in changing behavior and influencing beliefs about right and wrong, and why sometimes it fails.”

Punishment isn’t a new research topic in cognitive neuroscience, Radkani says, but in previous studies, scientists have often only focused on people’s behavior in punitive situations and haven’t considered the thought processes that underlie those behaviors. Characterizing these thought processes, though, is key to understanding whether punishment in a situation can be effective in changing people’s attitudes.

People bring their prior beliefs into a punitive situation. Apart from moral beliefs about the appropriateness of different behaviors, “you have beliefs about the characteristics of the people involved, and you have theories about their intentions and motivations,” Radkani says. “All those come together to determine what you do or how you are influenced by punishment,” given the circumstances. Punishers decide a suitable punishment based on their interpretation of the situation, in light of their beliefs. Targets of punishment then decide whether they’ll change their attitude as a result of the punishment, depending on their own beliefs. Even outside observers make decisions, choosing whether to keep or change their moral beliefs based on what they see.

To capture these decision-making processes, Radkani is developing a computational model of the mind for punitive situations. The model mathematically represents people’s beliefs and how they interact with certain features of the situation to shape their decisions. The model then predicts a punisher’s decisions, and how punishment will influence the target and observers. Through this model, Radkani will provide a foundational understanding of how people think in various punitive situations.

In parallel, working in the lab of Professor Mehrdad Jazayeri, Radkani is studying social learning, uncovering its underlying neural processes. Through social learning, people learn from other people’s experiences and decisions, and incorporate this socially acquired knowledge into their own decisions or beliefs.

Humans are extraordinary in their social learning abilities, however our primary form of learning, shared by all other animals, is learning from self-experience. To investigate how learning from others is similar to or different from learning from our own experiences, Radkani has designed a two-player video game that involves both types of learning. During the game, she and her collaborators in Jazayeri’s lab record neural activity in the brain. By analyzing these neural measurements, they plan to uncover the computations carried out by neural circuits during social learning, and compare those to learning from self-experience.

Radkani first became curious about this comparison as a way to understand why people sometimes draw contrasting conclusions from very similar situations. “For example, if I get Covid from going to a restaurant, I’ll blame the restaurant and say it was not clean,” Radkani says. “But if I hear the same thing happen to my friend, I’ll say it’s because they were not careful.” Radkani wanted to know the root causes of this mismatch in how other people’s experiences affect our beliefs and judgements differently from our own similar experiences, particularly because it can lead to “errors that color the way that we judge other people,” she says.

By combining her two research projects, Radkani hopes to better understand how social influence works, particularly in moral situations. From there, she has a slew of research questions that she’s eager to investigate, including: How do people choose who to trust? And which types of people tend to be the most influential? As Radkani’s research grows, so does her curiosity.

Approaching human cognition from many angles